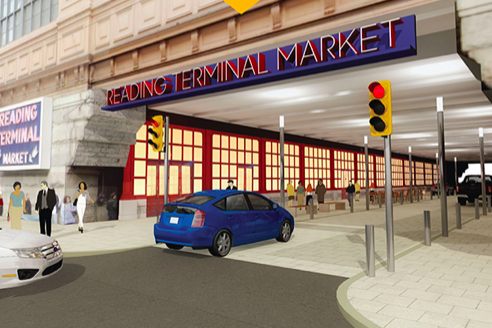 This rendering shows the 1100 block of Filbert Street Street in Center City Philadelphia after revitalization to expand Reading Terminal Market.

The sprawling "cosmopolitan canopy" of Reading Terminal Market will soon extend outdoors with the announcement of a $1 million plan to convert a block of Filbert Street into a pedestrian walkway.

When completed in spring 2020, the market will have an additional 15,000 square feet of public space.

“This funding will allow us to animate Filbert Street by creating a dynamic and inclusive public space with opportunities for shoppers, diners, families, artists, and entrepreneurs to all enjoy equally," Reading Terminal Market general manager Anuj Gupta said in a statement.

Funding and support for the project will come in part from the William Penn Foundation and the Knight Foundation.

The Filbert Street Revitalization Project will include the following elements, officials said:

"The Reading Terminal is a leading example of the power of public spaces to transform communities," said Ellen Hwang, Knight Foundation program director for Philadelphia. "This effort will extend its impact as a community connector that showcases local talent, brings together people of different backgrounds and attaches them to our great city."