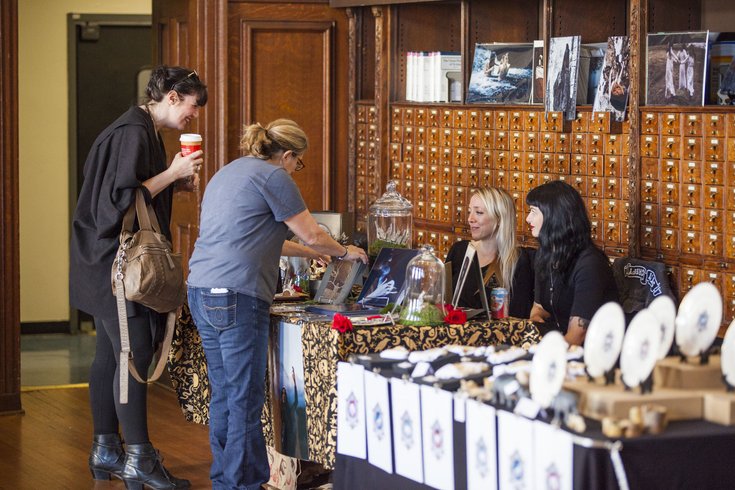 The Dark Artisans’ Bazaar was also held during Death Salon and featured 15 (mostly) local artists and artisans whose creations took inspiration from death.

In the grand hall of the Mutter Museum, a bustling crowd of death enthusiasts gathered last week to hear talks by medical examiners, morticians and other professionals who come face-to-face with human mortality on a daily basis.

This macabre-sounding gathering was the fifth incarnation of Death Salon, a symposium that encourages open conversations about death, mortality and mourning.

Previously held in California and once across the pond in London, Death Salon landed in Philadelphia for two days with the museum of medical oddities serving as the perfect backdrop. Despite several scientific talks, its atmosphere was far from that of a buttoned-up academic conference. Skulls decorated the lecture hall and neighboring exhibit room, attendants were donned in all black instead of tweed, and panelists sat on tall gothic-looking thrones on stage.

Needless to say, the event was a unique experience that hovered somewhere between science and art. I left Death Salon having learned more about the science of death than I ever knew to ask, including how CSI differs from real life, why some cultures keep mummies of loved ones in the house, and how to test if your book is bound in human skin.

In today's world, where we've lost track of how many CSI series and knock-offs are out there, people tend to have a skewed view of how autopsies and forensic science work. Medical examiner Marianne Hamel, who kicked off Death Salon with her talk, brought her own photos, stories, and statistics to prove that reality can be both wackier and scarier than Hollywood. She performs post-mortem exams at the Southern Regional Medical Examiner Office in Woodbine, Cape May County, and also owns Jersey Shore Forensics, a private forensic pathology consultation firm.

“On TV, they do this thing where they say, 'He died at 8:30,'” Hamel said. “Unless they were shot through the watch, I have no idea how to tell what time they died.”

Instead, forensic scientists use body farms to study the decomposition of corpses put in different circumstances to estimate how long ago death occurred. These research facilities can mimic the body's setting – whether it be the trunk of a car, a stuffy apartment, or an open field – and analyze the breakdown of tissue in its various stages.

Another misconception commonly seen on crime shows is the easy identification of stomach contents. “'For his last meal, he had vermicelli and Budweiser' – it's not that simple,” she said.

What Hamel can do sometimes is make out the writing on pills to determine whether it was an overdose or suicide. For instance, one body had a dozen tablets she eventually recognized as Oxycontin 40mg, drugs so incredibly potent that it must have been intentional. Another marker of suicide is a partially digested desiccant container: “if I find that in somebody’s stomach, I know they tipped the whole bottle back and took the whole thing in one go.”

Mummies certainly have their place in the world – hidden away in Egyptian tombs, on display in museums, or frozen in blocks of ice. But some cultures believe mummies belong in the everyday world with us, in our homes and even sleeping next to us in bed.

Los Angeles-based author and photographer Paul Koudounaris traveled to a village in Indonesia to investigate the phenomenon of domestic mummies, loved ones who have been preserved by their families with embalming fluid and displayed in the home.

“We had gone to a mummy festival that happens in the village out there, where people remove their dead relatives from their crypts and clean them,” said Koudounaris, who described how each mummy get dressed in everyday clothes and paraded down the street alongside a crowd of onlookers. “It's very 'Hard Day’s Night,' like The Beatles, with everyone reaching out to touch his clothing.” 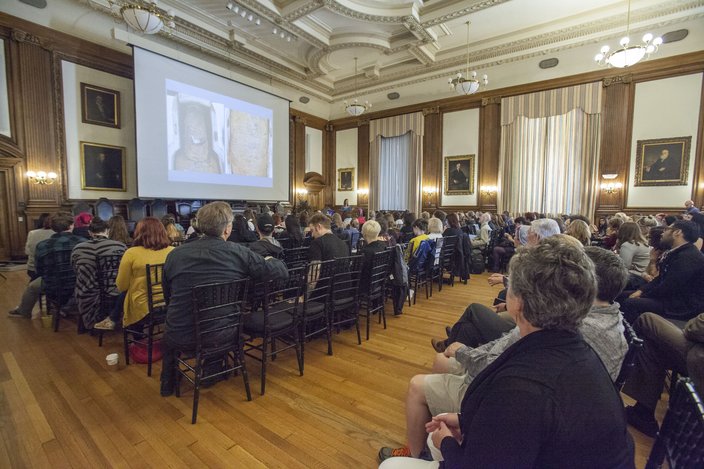 The photos from the festival looked frankly odd and grotesque – but only because the culture of death I grew up with shies away from direct contact with corpses. American culture prefers to sugar-coat death as “slumberland” and divides the worlds of living and dead with a sharp boundary that shall not be crossed. Other societies, like the Indonesian village, take more of a loose approach.

“Death is that dividing line between two social groups, the demarcation between the living and those who have passed on, and can greatly differ from society to society,” he said. “There's the soft border which we saw in Indonesia, where people are able to interact with those who have passed on. The hard boundary creates us versus them, two radically disconnected groups, and to cross that barrier is taboo.”

Koudounaris himself had a difficult time grasping the idea of mummies at home, especially when one villager described sleeping in the same bed with his mummified grandfather as a child. “Let’s face it, I don’t even want to sleep with my grandfather when he’s alive! Are you kidding me?”

In the 18th and 19th centuries, a number of books were bound not with traditional cow or sheep leather, but with human skin. Anthropodermic bibliopegy, or books bound in human skin, is the term used to describe a morbid trend that was surprisingly well-accepted by medical professionals at the time.

“Around the late 1800s, when the medical profession was really coming into its own, doctors learned how to make these books from people's skin,” said Megan Rosenbloom, Death Salon director and University of Southern California medical librarian. “They claimed to see it as a veneration, either of a person or the idea of the person — a Civil War soldier, for instance – making the book was honoring them.”

A number of books from this era was thought to be bound in human skin, but had yet to be scientifically confirmed. Rosenbloom and an interdisciplinary research team described their project to test these books in a panel discussion. Mutter Museum curator Anna Dhody moderated the panel, which featured Rosenbloom, analytical chemist Daniel Kirby of the Harvard Peabody Museum, and chemist Richard Hark of Juniata College.

“There's a technique that has been used in biochemistry for 30 or 40 years called peptide mass fingerprinting, a protein analysis technique that works very well for skins and hides,” said Kirby. “You put the sample in the instrument and get a spectrum, or a unique collection of masses from each protein.”

By analyzing a sample's collagen, a protein that makes up about 25 percent to 30 percent of the human body, peptide mass fingerprinting can determine what animal it originated from. The team has analyzed 22 out of 38 potential anthropodermic bibliopegy so far, with three samples still in process, and found that 12 are actually made of human skin. The rest were an assortment of sheep, cow, or even faux leather.