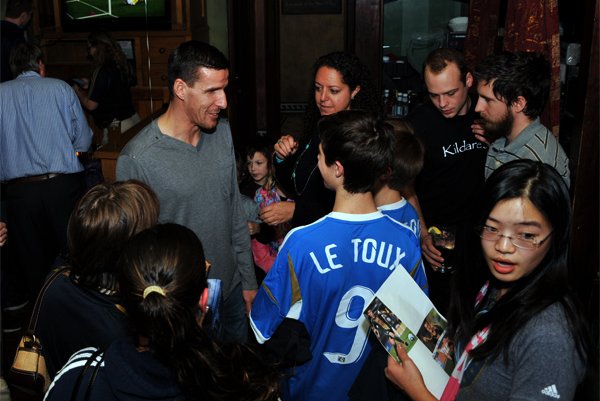 Sebastien Le Toux, who was traded to Colorado on Wednesday night, had been a fan favorite Union player since 2010.

The Philadelphia Union have never retired a number, or inducted a player into a "hall of fame", or held a testimonial match.

Sebastien Le Toux deserves each of those honors.

The club's talismanic striker was traded Wednesday night to Colorado, as first reported by PhillyVoice and Soccer by Ives.

On the business side, the move makes a ton of sense. Le Toux is 32 years old, no longer starts, and hits the salary cap around $300,000. Philly is stacked in the midfield and needed a bit of financial relief after the acquisition of United States international Alejandro Bedoya. The money acquired in the trade was then flipped to New England as part of the Charlie Davies trade.

Emotionally, it's another gut punch for fans who attached themselves to a consummate professional and a genuinely good person.

In a way, Le Toux is Philadelphia. He was the first goal scorer, the first all-star, and the first household name. He still holds club records for pretty much everything – goals, assists, shots, and minutes played. He did appearances and signings in every small suburban town from Mullica Hill to Marcus Hook. He always applauded the fans and made sure to spend time with them.

I recall one specific story with partial clarity.

It was 2011, about midway through the season and Le Toux had scored a brace. I think it was against D.C. United. We went to the locker room and it took him about 30 minutes to show up. Eventually, he walked in carrying all sorts of gifts that fans had created for him – letters, cards, posters, a custom skateboard, and a few other random items.

Le Toux said something to the effect of, "Sorry, got caught up speaking with the fans."

That was his modus operandi. He always had time for the fans and he was courteous with the media. Even after a bad loss or on a bad day, he was usually willing to talk. He didn't dodge those duties, but when he did, it was certainly understandable.

In 2010, Peter Nowak used him as a forward, but also played him at right wing when Alejandro Moreno and Danny Mwanga were paired up top. Seba bagged 14 goals and 11 assists, contributing from both positions and earning the club's first all-star selection.

That changed a bit in 2011, when Nowak opened the season with a 4-2-2-2 "empty bucket" formation that coupled Le Toux with new signing Carlos Ruiz. Seba went through an epic slump to start that campaign, but he never came out of the lineup. He was an excellent two-way player and never once stopped working and hustling to break out of the goal-scoring drought that carried into the summer. Eventually, he started to find his form again and snatched 11 goals and 9 assists, many which came when the team switched to a 4-5-1 and let him latch onto long balls at the tip of the spear.

Le Toux was traded in 2012 in a well-documented and head-scratching turn of events. After going to Bolton Wanderers on trial, Le Toux expressed interest in signing a new Union contract. Instead, Nowak shipped his top forward to Vancouver for allocation money before eventually being canned.

It was one of just many bizarre moves that earned the ire of Union fans during the early days of the franchise. Le Toux spent the first part of 2012 with the Whitecaps before he was traded to the rival New York Red Bulls that summer.

Sebas's return to Philly in 2013 was part of the veteran rebuild that John Hackworth started with limited resources, while also trying to clean up the mess that Nowak left behind. This time, Le Toux went back to the right wing in a 4-1-3-2, and finished the season with just three goals but a career-high 12 assists. Le Toux was part of an oft-criticized midfield that year, but really found a way to contribute to a team that hovered around the playoff line, ultimately coming up short.

In 2014 and 2015, it was a tad different. Hackworth was eventually fired and Le Toux moved back and forth between forward and the right wing. He was a regular starter in Jim Curtin's 4-2-3-1 and quietly finished the 2014 campaign with 12 goals and seven assists. He wrapped up 2015 with eight goals and six assists and joined the prestigious "50/50 club" for players who have tallied 50 goals and 50 assists in their MLS careers.

And who can forget the U.S. Open Cup? Seba had five goals and five assists in the USOC as a Union player and scored in the 2015 final at Talen Energy Stadium. He holds a national record with 16 goals in the modern era of the competition.

It hasn't always been perfect, though. Le Toux was a solid player on average teams. He only played on one playoff club during his five seasons in Philadelphia. Would he be a starter for the LA Galaxy, FC Dallas, or Sporting Kansas City? This was a guy who was deemed excess by Seattle and left unprotected in the 2010 expansion draft.

Seba was never the most technically gifted player. There were plenty of times when his first touch let him down. Concrete cushioning became common in the later years and Seba sometimes looked out of place among other talented midfielders.

But he would always pop up with that late goal, or assist, or game-changing play that made all of that go away. Jokes were frequent in the press box – "Watch Seba score the game-winner here" – and, of course, he'd show up in the clutch.

Sometimes the outgoing nature of Le Toux even trended into negative territory. There were times when he was doing "too much media", according to Union brass. That directive to limit his interviews and appearances was given sometime in the 2013 season and lasted for a few weeks.

A 1,200-word article is never going to be enough to tell Sebastien Le Toux's Philadelphia story. Whenever the first Union book is written, he'll feature prominently in those pages. There are many memorable moments, like the hat trick he scored in the very first Union home game and the playoff goal against Houston. His 2013 return was an all-time "feel good" moment.

There will be a day when Sebastien Le Toux decides to retire. Maybe it's soon, maybe it's not. Maybe Seba extends his career in the NASL or chooses to become a coach.

Whenever that day comes, he should be putting pen to paper on a one-day Philadelphia Union contract. He should retire as a Zolo and immediately have his name and number hung at Talen Energy Stadium. He should play a testimonial match with the likes of his former teammates Danny Califf, Brian Carroll, and Amobi Okugo.