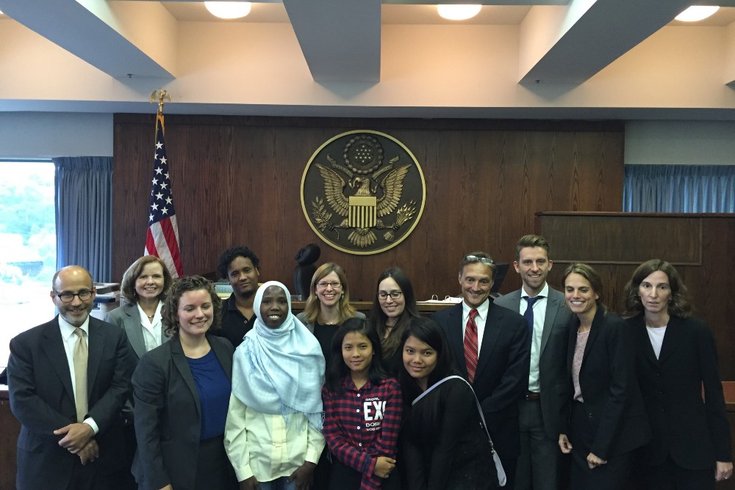 Pictured are some of the refugee students, along with their lawyers, who are suing the School District of Lancaster for allegedly refusing to enroll them in public schools or instead diverting them to a private academy.

A federal judge has secured six refugees' rights to a proper education at a Lancaster school.

The five-day trial determined whether or not the civil rights of the students were violated when the School District of Lancaster diverted students to an "inferior, privately operated alternative school" called Pheonix Academy rather than J.P. McCaskey High School.

“Our refugee clients have lived lives of unimaginable hardship, and they are way overdue for a break,” said Witold Walczak, legal director of the ACLU of Pennsylvania and one of the lawyers for the students in a news release. “We are thrilled the court recognized that school districts have a legal obligation to provide refugees and other immigrants with equal educational opportunities until age twenty-one.”

The students are between 17-21 and are from Somalia, Sudan, Democratic Republic of Congo and Burma.

The American Civil Liberties Union of Pennsylvania announced the federal lawsuit earlier this summer and accused the district of "illegally refusing" to enroll the six refugees, who practice English as a secondary language.

The lawsuit contended that the district's decision violated their right to a free, public education protected under Pennsylvania law and that an ESL program at McCaskey, a traditional high school.

A district spokesperson confirmed to Newsworks Friday that it would see that the six would start at McCaskey next week.

The ruling stated that the requests of the students "were ultimately easy to resolve."

"As to those issues, the law is clear: eligible students must be timely enrolled, and efforts to overcome language barriers must be sound and effective."

Maura McInerney, a senior staff attorney at the Education Law Center said in the release that the decision will impact the students for the rest of their lives.

“This decision will change their life trajectories by giving them what they were always legally entitled to: the opportunity to learn English and gain the knowledge they desperately need for a successful life," she said.