Rehabbing Velasquez will return to Phillies rotation, but knows it's 'a must' to capitalize on second half 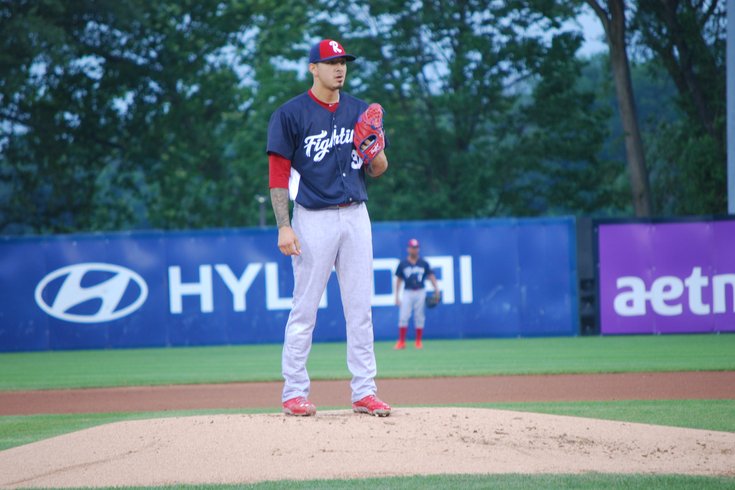 Vince Velasquez allowed three runs (two earned) in three innings on Wednesday night in Trenton, where he made his second minor league rehab start. Velasquez has been on the disabled list with a right elbow flexor strain since May 31.

TRENTON, N.J. – Vince Velasquez’s sheer stuff – a mid-90s fastball complemented by an effective changeup and curveball – and his inconsistencies in his early starting career have led many to visualize what the hard-throwing right-hander would look like as a lockdown late-inning reliever.

General manager Matt Klentak sees the untapped potential in Velasquez’s arm and understands the value of a consistent starting pitcher (180-200 innings a year) is stronger than that of an effective relief pitcher (60-80 innings). The 2017 season, like the two before it, has been set aside as a rebuilding year for the organization, a season to let players sink or swim and see whether they can fulfill their so-called ceilings as young big leaguers.

Maikel Franco will keep getting at-bats in the middle of the order, despite his struggles, and Nick Williams and the others behind him at Triple-A will get regular reps in the outfield in the coming year, despite their inexperience, and Velasquez will continue to take the ball every fifth day when his minor league rehab assignment expires later this month.

That continues to be the plan, according to the decision-makers in the front office. Nothing has changed.

While impatient fans and talking heads instead visualize what it would be like to have Velasquez entrenched as the team’s long-term closer, Velasquez has been spending his time visualizing something else: what it’s like to stand on the mound and rip through a lineup if he were a Max Scherzer or a Chris Sale.

Because during his five-week stay on the disabled list while recovering from a right elbow flexor strain, this is exactly what Velasquez has been doing. He’s been looking at video and taking notes.

“I compare myself to a Max Scherzer (style-wise), I’m not saying my stuff is as good as his, but you have to compare yourself to someone and that’s one of the guys I idolize,” Velasquez said after throwing three innings in his second minor league start for Double-A Reading on Wednesday night. “His pace is incredible. It makes the gameplay faster, you get more calls, everything kind of goes your way. Look at Chris Sale, he’s another. He breezes through the lineup. If you have that momentum and that pace, it works.

“Sale’s a lefty, but, when you watch them and see how they attack certain situations, you want to put yourself in that situation because you’re going to coming across it later on. It’s not only the physical aspect, it’s the mental aspect. This is what is going to get you through the game through tough situations mentally. The mind takes over absolutely everything. If you’re mentally strong you can go right through it and nothing can stop you. … I’m going to work my tail off to be just like them.”

Much of the chatter of Velasquez eventually making his way into a relief role (a topic that manager Pete Mackanin admitted has even penetrated the coaching room) is stemmed from the fact that he’s struggled to carve out a permanent place in the Phillies rotation.

“It’s a must. It’s paying off right now, all the bullpens, all the down time, looking at video, video from last year, pinpointing things here and there and critiquing my delivery."

He’s also failed to pitch at least six innings in seven of his 10 starts. In his 34 starts with the Phillies since the beginning of last season, Velasquez has pitched fewer than six innings in more than half of his games (18 of 34).

But the most important number there might be the 34. Healthy major league starters (like Scherzer last season) expect to make 34 starts in one season.

So, since joining the Phillies, Velasquez has pitched the equivalent of one major league season. He has a 4.52 ERA in 181 innings in that “season,” collecting 205 strikeouts while walking 66 batters.

“That’s what I was thinking,” Velasquez said of his workload with the Phillies in 2016 and ’17 as one full season. “That’s pretty much a solid year starting with this organization and in this league. It’s time to click it. It’s time to try to turn things around. That’s one of the things I had in mind, setting goals in the second half and pretty much turning the whole thing around and going from there.”

But just as the Phillies are unlikely to keep counting on Franco as a possible middle-of-the-order bat if he’s sporting a sub-.400 slugging percentage, the development alarm clock for Velasquez will sound at some point, too.

The Phils’ brass should absolutely exhaust every opportunity to get the most out of their young players in seasons like 2016 and 2017. But, eventually, you have to come to a conclusion of whether or not they’ll be around in 2019 or 2020, or what role would best suit them if they are still around.

Velasquez will spend his All-Star break in Clearwater, Fla., where he is likely to make his third and final rehab start. He’ll jump back into the Phillies rotation sometime after that, perhaps when Jeremy Hellickson is traded prior to the July 31 deadline.

And then Velasquez will have what amounts to a two-month tryout to prove he has the mettle and mentality to be a reliable major league starter.

“It’s a must,” Velasquez said of beginning his second half with a clean slate. “It’s paying off right now, all the bullpens, all the down time, looking at video, video from last year, pinpointing things here and there and critiquing my delivery… A lot of times I tend to be quick, as a power pitcher I want to just get up and go. But reflecting back on film, looking at fastballs I was throwing earlier in the season, I was a little more fluid, getting back, loading on that back leg, and just driving forward. And that also made my secondary pitches better.”