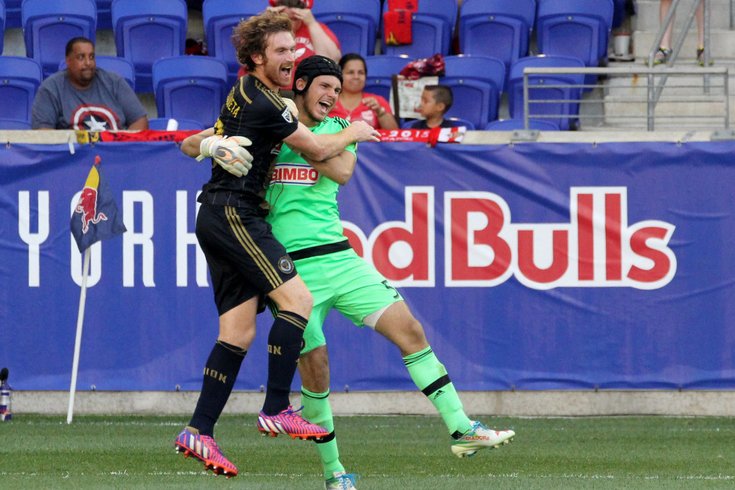 You could argue that last season's shootout win against New York in the U.S. Open Cup quarterfinals was the best Union result of 2015.

This was a road game against the top team in the East, played in a stadium that had haunted Philadelphia for years. Only once in six seasons had the Union ever won a game inside Red Bull Arena.

On a normal day, Conor Casey's first-half ejection would have garnered post-game headlines. The Union's big, bald center forward was judged to have stomped on Connor Lade while chasing down the fullback, earning a straight red card and leaving his team with ten men for the rest of the game.

" I think we posed some real problems for them for the first time that season. They were on a good run and having a really good year. I think they were a little bit surprised at how we played, and I think we deserved that win because we came out not just to defend, but attack."

It was scoreless at the half, and the Union defended like hell to start the second 45. They survived a close-range effort from Anatole Abang and actually opened the scoring with a brilliant Vincent Nogueira counterattack that ended with Eric Ayuk slamming home an inch-perfect pass at the far post.

Philly somehow held that 1-0 lead until the 94th minute of regulation, when New York finally equalized through Lloyd Sam after multiple failed clearances inside the box.

That was surely the end, as it felt like Philadelphia's resistance had finally faltered. It looked like the Union would wither again under the constant Red Bull pressure and cough up an extra-time goal.

But that never happened. Jim Curtin's team held on for penalty kicks and reserve goalkeeper John McCarthy was the hero, turning aside Sam's effort before Fernando Aristeguieta finished it off from the spot.

"All I remember is that it was a lot longer than it needed to be," Brian Carroll said of last year's quarterfinal. "But we dug deep, even against the odds at their place. We found a way to pull out the result we needed and move on in a tournament that we value. No matter who's playing on the field for us or for them, we know it's going to be a tough and contested matchup. We want to do well in this tournament and we want to get back to playing solid soccer, not giving up goals but still creating chances. This is a good opportunity to do that right away."

Sebastien Le Toux earned the secondary assist on Ayuk's goal. It was a clever return pass with the outside of the right boot that sent Nogueira away into the left channel.

"I mean, I would say it was probably one of our best performances away last year," Le Toux recalled. "Afternoon game I remember, it was an early game. It was interesting. I think we played good soccer and stuck together and kept our discipline defensively. I think we posed some real problems for them for the first time that season. They were on a good run and having a really good year. I think they were a little bit surprised at how we played, and I think we deserved that win because we came out not just to defend, but attack. They had that goal at the end to equalize but I think we could have won in extra time. Luckily Johnny saved us in penalties and we won. It's a good memory. Hopefully, we can do the same thing this time at home."

If the circumstances on the field were wild, think back to the scheduling issues that plagued this game from the beginning.

The problem was a conflict with the 2015 International Champion's Cup, which is the summer tournament that features exhibition games between MLS clubs and European super powers.

It depends on who you believe, but the story goes something like this – Red Bull officials wanted to move the game, but the Union front office played hard ball in an effort to gain a competitive advantage. Philadelphia lobbied to move the game to PPL Park, which always seemed unlikely. Instead, the resolution was to play the game at four in the afternoon as part of a double header with the PSG-Fiorentina match.

The Union front office then organized and funded a bus trip for supporters, and more than 500 fans signed up for the trek to North Jersey.

Fans might not want to hear it, but Nick Sakiewicz and Union officials deserve a lot of credit for the way they handled the situation. The refusal to accommodate an opponent limited the presence of Red Bull fans and probably gave the Union a confidence boost going into the game.

"I'm sure (New York) didn't use (the scheduling) as an excuse," Carroll said. "They did their best to get some things moved around. For whatever reason, it went in our favor last year. We had to defend a lot, but we created a couple of chances, even towards the end of the game where we could have put it away in regulation instead of having to go into extra time and penalties."

Curtin explained that the toughest part wasn't necessarily the conflict in schedule, but getting his team prepared and ready to play on a weekday afternoon.

His players echoed those sentiments.

"It was a little weird, just for me to play at four o'clock in the afternoon on a Wednesday," Le Toux said. "Sometimes you just have to go with the schedule, however, they can do it, because they had a game coming up against Chelsea. It was a good turnout for us. I think maybe they weren't ready, maybe there was too much going on for them, but we're not going to look for excuses for them. It was a good performance for us and we went on to the next round and made it to the final. Hopefully, we can keep building our team in a good way. Each run we've learned more and come together as a team."

One thing is for certain; both teams will go for it on Wednesday.

Long gone are the days of New York fielding reserves in the U.S.O.C. Head coach Jesse Marsch values the tournament and put out a strong squad for the Red Bulls' opening round win at Rochester.

Likewise, Philadelphia sees the tournament at a chance to win some silverware.

"I think it's two really good teams in the league, two coaches that know each other well," Curtin said. "Jesse is a friend and a former teammate that I played with for a lot of years. I think the one thing that can be said is that, when we played (together) under Bob Bradley, he instilled in us that the Open Cup is a serious competition. It's one of the two trophies that there are in this country. I know that people ask if (New York) is going to play a full strength lineup. I know for a fact that they're playing their guys because that's how Jesse is. That's the same way I treat the open cup and we'll both put our best lineups out there. We have the advantage of being on our home field this year, which is huge."