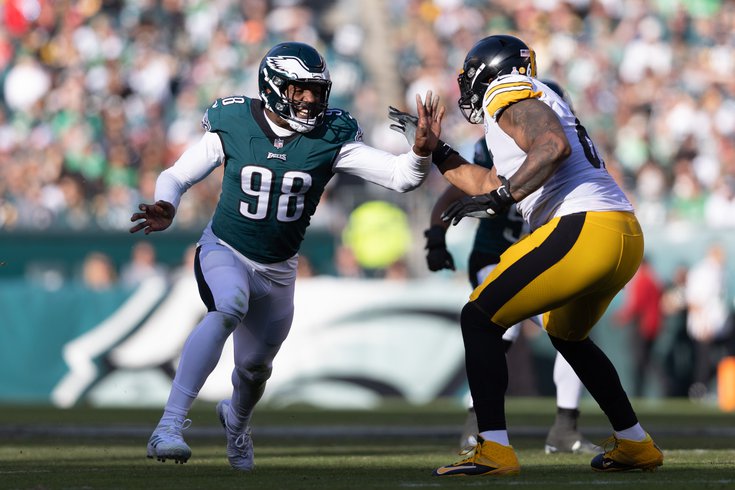 Philadelphia Eagles defensive end Robert Quinn is headed to injured reserve, according to a report from Tom Pelissero of NFL Network.

#Eagles DE Robert Quinn is having a knee scope this week and will go IR today, per sources.

Quinn had been coming on and settling into the scheme before the knee got twisted in practice last week. Now out at least 4 games, but there’s optimism he’s back for the playoff push. pic.twitter.com/GPRZvRBCaK

I can't say I agree that Quinn was "coming on." I would also contend that rushing the passer does not require much scheme adjusting, especially for a 12-year vet.

The Eagles traded a fourth-round pick for Quinn at the trade deadline, hoping that he could add some juice to their pass rush in a role reminiscent of Chris Long's in 2017, or Ryan Kerrigan's in 2021. So far he's been more like Kerrigan than Long, as he has just 2 tackles and 2 QB hits with no sacks in five games.

Quinn will miss the next four games against the Giants, Bears, Cowboys, and Saints. If you're a glass half empty type, you may see this as a setback to an already ineffective player. If you're a glass half full type, perhaps the necessity of a knee cleanout helps explain Quinn's disappointing production, and maybe he'll begin to produce when fully healthy.

Starting slot CB Avonte Maddox is eligible to come off of injured reserve this week, so Quinn's move to IR creates a roster space for Maddox to return.