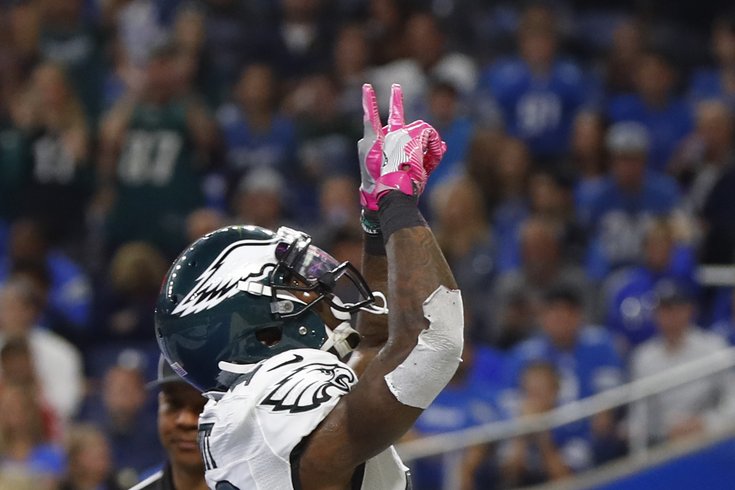 Josh Huff points his fingers high, which is the same direction that he allegedly likes to be.

According to Stephen McKenzie of CBS3 in Philadelphia, Philadelphia Eagles wide receiver Josh Huff was arrested this morning on the Walt Whitman Bridge. McKenzie's sources say that Huff was in possession of marijuana and a gun.

Eagles wide receiver Josh Huff arrested on the Walt Whitman this morning. Sources say he was speeding had Marijuana and a gun. @CBSPhilly pic.twitter.com/GgIC5rbmim

The Eagles released the following statement:

"We are aware of the incident today involving Josh Huff. At this point, we are gathering more information."

The Eagles have had their share of off-the-field incidents this year. Nigel Bradham was arrested twice – once for allegedly beating a cabana boy over a dispute over an umbrella, and then later for possessing a firearm in his carry-on bag at the airport. Nelson Agholor was also accused of rape at a gentlemen's club in Philadelphia, although sexual assault charges were never brought against him.

Huff has not contributed much to the regular offense this season (13 catches, 72 yards, 1 TD), but has been a standout special teams player. He returned a kickoff for a touchdown against the Minnesota Vikings two Sundays ago, and then had a 53-yard kick return against the Dallas Cowboys the following week.

Huff's arrest comes at a time when the Eagles are rumored to be pursuing wide receivers before the trade deadline, which is at 4:00 p.m. EST today.