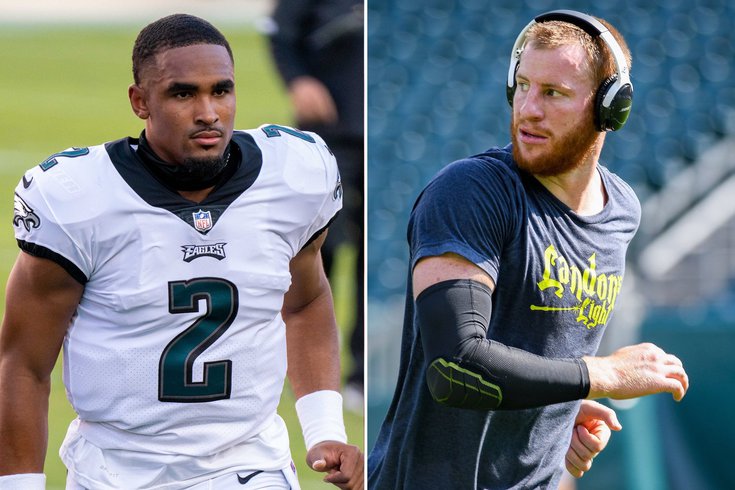 Carson Went should be looking over his shoulder.

Now this is all starting to make a bit more sense.

On Sunday morning we wrote about the multiple reports emerging that Eagles QB Jalen Hurts was getting first-team reps in practice and that the team was planning to use him more often — and that they are going to do so with Carson Wentz on the sideline, something they've previously been hesitant to try. It seemed like the plan was not to give Hurts the ball for entire series at a time, but to mix him in on more offensive plays throughout the game to keep the defense on its toes.

While we disagreed with the notion — if you're going to play Hurts that much, you should make him the quarterback and not flip flip — it appears there might be more to it than originally thought.

According to a report from Geoff Mosher of Inside the Birds, Hurts' increased practice time with the first team could be in preparation of him possibly taking over if Wentz struggles against the Seahawks.

While that's certainly interesting, it's also rather vague (this is absolutely not a shot at Mosher's report) in terms of what Lurie means by "if Wentz struggles." He's been struggling all year, so could this just mean more snaps for Hurts, like those earlier reports from ESPN's Tim McManus and NFL Network's Mike Garafolo suggest? Or does Lurie want Doug Pederson to sit Wentz down for longer, perhaps benching him for part of the Seahawks game if he again comes out flat?

Both McManus and Garafolo insisted that the Eagles are not "benching" Wentz — he's still expected to start against Seattle — but it's hard to read this latest report from Mosher as anything other than ownership giving the coach the green light (or perhaps even a direct order) to bench the franchise quarterback should he struggle.

[UPDATE: According to NBCSP's John Clark — and as we speculated above — it was less of a direct order from the owner and more of a reminder that the coach has the ability to change quarterbacks if he believes it will improve the team. Yes, that's where we're at with these 2020 Eagles.]

Our own Jimmy Kempski wrote on Monday morning that the time has come for Lurie — who reportedly didn't even travel to Cleveland to watch his team lose in Week 11, in part due to his frustration over their struggles this year — to blow up the Eagles, part ways with Pederson and GM Howie Roseman, and build this thing back up from scratch. Part of doing that will be evaluating the talent on hand, and that certainly includes Hurts.

The Eagles spent a valuable second-round pick on him in this year's draft — and if they continue to slip down the NFC East standings, they could have a top 10 or even a top 5 pick in the upcoming draft. It would behoove them to know whether or not they need to spend another high pick on a quarterback or if they're going to try to develop Hurts in case Wentz's struggles linger into next year. Because one thing is certain, whether Wentz is on the bench or under center, he's not going anywhere. That was guaranteed the day he signed that massive contract last year.

How much will Hurts play against Seattle? It sounds like that's dependent on how poorly Wentz plays. Stay tuned...