Bill Belichick could be in trouble again, this time for using deflated game balls

According to a report, the Colts' Super Bowl hopes weren't the only thing deflated by the Patriots Sunday in Foxborough.

They were also - illegally - using deflated footballs, according to Bob Kravitz of WTHR.com.

This morning, it was reported by Bob Glauber of the Boston Globe - and confirmed to Kravitz by an NFL spokesman - that the league is indeed looking into the matter.

Kravitz went on to explain that during the game, at least one ball was removed from play and weighed by NFL officials.

Mike Florio of ProFootballTalk.com is also reporting that "abnormal" balls were removed from play, saying that it happened several times throughout the game.

If you're wondering why this is an issue, it's because each team uses its own set of game balls when on offense, and slightly deflated balls are easier to grip, especially in the rain, like the kind that fell throughout the Patriots' 45-7 clubbing of Andrew Luck and the Colts.

It's not hard to see how this could give one team a competitive edge over the other, but this game was never close, and it probably didn't have too much of an impact on the final outcome. That, however, won't stop the NFL from looking into this potential rules violation and punishing Bill Belichick and his team. 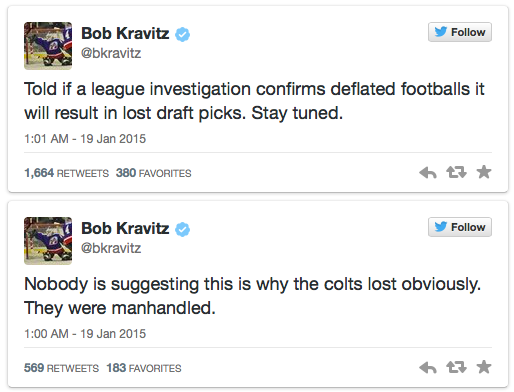 It's been 10 years since the Patriots have won a Super Bowl, which also came under scrutiny after the team was caught filming opponents' in-game signals. They weren't caught until 2007, but it was later revealed to have been going on for a decade before that.

Even if the Patriots beat the Seahawks in two weeks without the use of deflated game balls, many will likely question the validity of their win, as it would be their fourth Super Bowl under Belichick, all of which came using some sort of unfair advantage (read: cheating).

It will be interesting to see how quick the league is to sweep this under the rug.