ESPN’s Marc Stein first reported that Sam Hinkie has stepped down from his responsibilities with the Philadelphia 76ers, an absolute bombshell. The Sixers later released an official statement confirming the report: 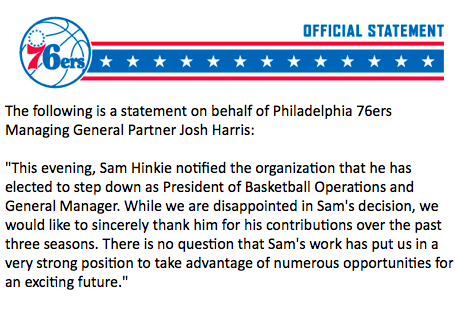 Minutes later, Yahoo’s Adrian Wojnarowski tweeted that the Sixers are targeting a replacement who is very close to chairman of basketball operations Jerry Colangelo, his son Bryan:

Bryan Colangelo had been targeted as the Sixers GM, a candidacy that has been gathering momentum, league sources tell @TheVertical.

Sam Hinkie would have been fully marginalized in Sixers front office, with Jerry and Bryan Colangelo -- if hired -- running operations.

Sixers ownership had been touting that Hinkie would have another top basketball executive with a comparable title. That was a tough sell.

Multiple reports have confirmed that Bryan Colangelo will be the newest Sixers general manager, which will generate a good bit of controversy. Colangelo was the GM and president of the Toronto Raptors from 2006 to 2013. He did win Executive of the Year in 2007, but the Raptors failed to secure a winning record in every subsequent season under Colangelo's stewardship.

Prior to this, Colangelo was general manager of the Phoenix Suns. While in Phoenix, he acquired Steve Nash and played a big part in building the successful "Seven Seconds or Less" Suns.

For his part, Hinkie reportedly sent a 13-page resignation letter to members of the Sixers' ownership group. From Stein:

"... Given all the changes to our organization, I no longer have the confidence that I can make good decisions on behalf of investors in the Sixers -- you. So I should step down. And I have."

When Colangelo was hired back in December, there were questions about how the front office dynamic would work out. Now, it seems we have an answer.

Hinkie inherited a bare cupboard when he took over as general manager and president of basketball operations in May 2013. He tore down the roster, focused on accumulating long-term picks and assets, and oversaw a rebuilding (or tanking, depending on how you see it) plan that saw the Sixers go a combined 47-195 over the last three seasons.

"The Process" was very controversial, but the Sam Hinkie era in Philadelphia is over. Now, it's The Colangelos.