Sean Donahue is running in the primary election for a U.S. House seat and believes Islam is akin to 'voodoo or satanic worship' 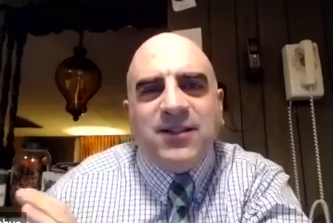 A Pennsylvania Republican women's group has opted to cancel an event after inviting a congressional candidate with extremist views.

The Dauphin County Council of Republican Women had been scheduled to hold a forum Saturday for GOP candidates hoping to replace U.S. Rep. Lou Barletta, who is leaving his House seat to challenge Sen. Bob Casey this year. Barletta, former mayor of Hazleton, represents Pennsylvania's 11th District, which includes Scranton, Wilkes-Barre and parts of the Poconos.

Among the candidates invited was Sean Donahue, a white nationalist whose campaign website declares that freedom of religion covers Christian faiths and does not include Islam, which he equates to "voodoo or satanic worship." Donahue also recently was convicted of making terroristic threats against police.

In response to Donahue's invitation, GOP candidate Andrew Lewis announced he was boycotting the event until the fringe candidate was uninvited, citing Donahue's past promotion of anti-Semitic and KKK views.

"The views held by Sean Donahue are consistent with Nazi ideologies and this is unacceptable," Lewis said in press release. "Americans fight Nazis, we do not give them a platform to spread their hatred." Lewis, an ardent Trump supporter, asserted the president's "Make America Great Again" slogan "means making it great for all people."

Instead of rescinding its invitation to Donahue, the organization decided to simply nix the event altogether due to "unforeseeable actions and views of a few candidates."

Donahue lashed out after the decision, releasing a nine-page, rambling essay that, among other things, advocates for race-based immigration policies to "take the American Dream away from the hoards (sic) of Muslims and Central and South Americans" and calls for a Congressional White Caucus to counter the Congressional Black Caucus.

"History should tell us that minorities have traditionally not been treated well by majorities," he writes regarding his fear that whites will one day become the minority in the United States, unaware of the obvious irony in the statement.