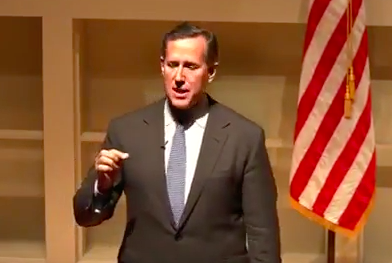 Santorum was on hand at the invitation of the Cornell Republicans, who brought the social conservative in for an extended Q&A session about the future of American politics.

Early on in the event, a group of gay rights demonstrators broke out into a chant of "shame!" against Santorum, a Catholic politician who has stood in vocal opposition to gay marriage, once comparing the battle to the fight against terrorism in the wake of the 9/11 attacks.

Santorum adamantly questioned the protesters' commitment to diversity in the face of those who disagree with them.

It's like the word God just triggers the hell out of them @RickSantorum @yaf pic.twitter.com/YszZVnK8XR

During the Q&A, Santorum fielded a direct question about gay marriage by reitering his religious conception of marriage as a bond between a man and a woman, according to The Cornell Review.

Santoroum's book, "Blue Collar Conservatives, Recommitting to an America That Works," was reportedly an influential read for President-elect Donald Trump, who met with Santorum two years before his improbable run for the White House.

In a recent op-ed for The Philadelphia Inquirer, Santorum praised Trump for securing a "YUGE Republican victory" and predicted that he will deliver for working families.