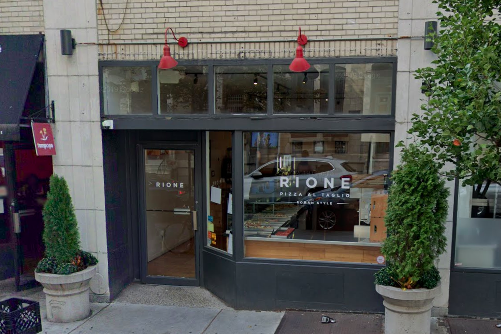 Rione Pizza will reopen next month in a new Rittenhouse location, just a few doors down from its former shop.

Rione Pizza plans to reopen in October after being shuttered for several months during the coronavirus pandemic. But it will do so in a new location.

The Rittenhouse restaurant is relocating to 100.5 S. 21st St., just a few doors down from its former location. It will fill the space previously occupied by Poi Dog, a Hawaiian and poke restaurant that closed in July.

Rione Pizza announced the news in an Instagram post, saying the smaller space will be better suited to its "grab and go" model, particularly amid the pandemic. The restaurant anticipates opening in early- or mid-October.

Rione offers pizza al taglio, or pizza by the "cut." Slices are cooked in rectangular trays and cut into square pieces sold by weight. The style originated in Rome as a street food wrapped in paper and taken to go.

Roman-style pizza slices are crispy on the bottom and light on top due to the dough's long fermentation process. The pizza ends up looking similar to focaccia bread.

Owner Francesco Crovetti learned the cooking techniques from his Italian parents who lived in Rome. He and his wife, Alison, founded Rione Pizza in 2017.