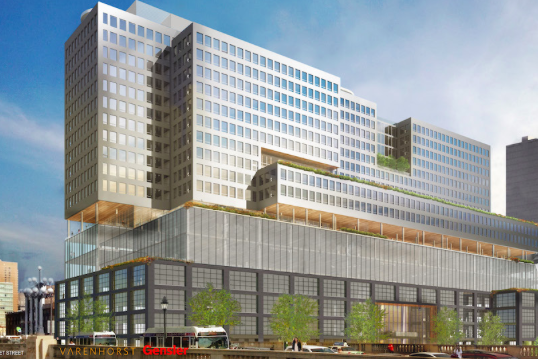 PMC Property Group's plans for the former Marketplace Design Center at 2400 Market Street are coming into greater focus. The developer released a revised rendering Tuesday of the proposed riverfront promenade that would connect Chestnut and Market streets.

The project, designed by Varenhorst and Gensler Philadelphia, calls for a 22-story structure with 450,000 feet of office space and 350 apartments, PMC announced in February.

According to Property, many of the original features of the Marketplace Design Center will remain intact, including two retail floors — one underground — and three floors of offices in the space formerly used as an interior design showroom.

In revised renderings, the previous four-story office addition now features a glass enclosure and a green terrace designed to help secure LEED Gold certification for the project. The 12-story residential tower will sit atop the terrace level.

The project appears to be aimed at attracting financial-service companies and law firms from high-rises located further east in Center City, according to the Philadelphia Inquirer. It is estimated to cost more than $250 million and hopes to bring in tenants by early 2018.

A meeting with the Civic Design Review board was scheduled to take place for the project Tuesday afternoon.