Stargazers in the Philadelphia area could get a glimpse of a rocket launch as it heads out to the International Space Station on Saturday morning.

Weather permitting, the Antares rocket should be visible in the Philly area anywhere from 90 seconds to two minutes after a 7:37 a.m. launch from NASA's Wallops Flight Facility, near Chincoteague Island in Virginia.

A visibility prediction map released by NASA also shows that South Jersey viewers could see the spacecraft roughly a minute after the launch, depending on how far south in the state they're watching from.

Forecasts on Wednesday afternoon showed that viewers in the Philly region could be blessed with sunny skies on an otherwise blustery Saturday morning. The area could see the rocket's flames and a smoke trail as it heads out to space. 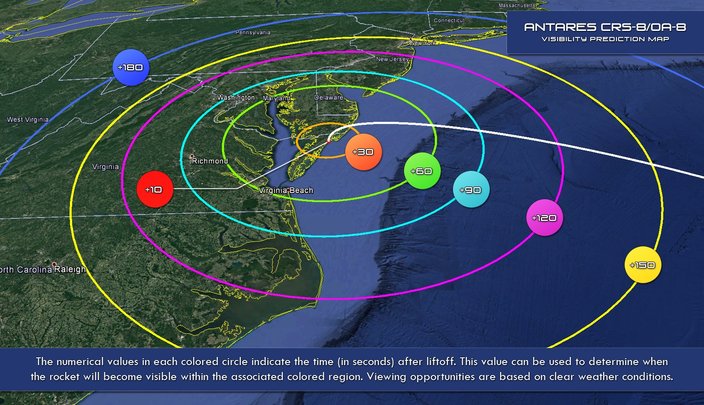 The rocket, manufactured by Orbital ATK, is set to carry more than 7,000 pounds of food, clothing and experiment equipment to the space station, according to a NASA press release.

Also, for space enthusiasts who are so inclined, the Wallops Visitor Center will open at 3:30 a.m. Saturday for a public viewing of the launch. No alcohol or pets allowed, though.

The launch can also be streamed live here.