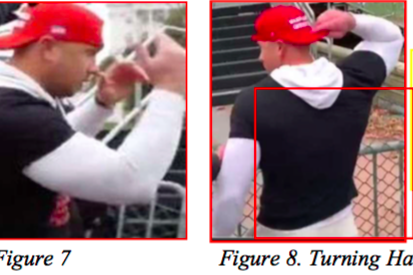 Bucks County resident Ryan Samsel, who the FBI says is pictured above, is accused of toppling a barricade at the U.S. Capitol and knocking over as police officer during the Jan. 6 insurrection in Washington, D.C. Video of Samsel has been was shared widely on social media.

A Bristol man face federal charges for his alleged role in a skirmish with U.S. Capitol police in Washington, D.C., during last month's insurrection.

A criminal complaint written by an FBI special agent explains how Samsel allegedly led a group of rioters toward the Capitol and toppled a police barricade, knocking over a police officer. The officer struck her head on the stairs behind her and lost consciousness, according to the complaint.

Video of the incident was shared widely on social media on Jan. 6, the day of the Capitol riot. Investigators say they identified Samsel in the pro-Trump crowd based on images captured from the video, in which he appears wearing a jean jacket and a red "Make America Great Again" hat as he approaches the barricade.

IMPORTANT: this is exact moment the siege of the Capitol building began as the two men in front ripped down a preliminary barrier & rushed officers who were behind a 2nd barrier

They then encouraged others to follow their lead. Officers appeared to be taken completely off guard pic.twitter.com/LE0a01PXBi

After an interaction with a Capitol Police officer, Samsel is seen removing his jacket and turning his hat backwards, as if preparing to fight. Another man appears to try to talk Samsel out of escalating the situation, but Samsel is seen returning to the barricade and toppling it.

A fight ensued, but Samsel appears to stand to the side with the officer who fell.

"We don't have to hurt you, why are you standing in our way?" Samsel allegedly told the officer.

According to the criminal complaint, the officer who struck her head on the stairs collapsed later in the day while arresting another rioter and was transported to the hospital, where she was diagnosed with a concussion.

Investigators said they used cell phone location data and other information to identify Samsel and allegedly link him to the scene at the U.S. Capitol.

Authorities said Samsel is on parole in Pennsylvania and that he is currently wanted in Riverside, New Jersey, on a 2019 warrant for an alleged assault.

Samsel has a criminal record that dates back to 2003, and he has been in and out of prison multiple times for violent offenses in Bucks County, according to court records.

In a 2006 case, he got two years probation after pleading guilty to terroristic threats, reckless endangerment and disorderly conduct. He then faced a series of criminal charges between 2007 and 2009. Among them, he pleaded guilty to simple assault twice, for separate incidents, and was sentenced to one to two years in prison each time.

Then in 2011, Samsel got more time in prison for another two criminal cases after pleading guilty to witness intimidation, conspiracy, terroristic threats, simple assault, unlawful restraint, reckless endangerment and harassment. Samsel was sentenced to a total of four to 10 years in prison. Out of prison by 2016, he was charged with and pleaded guilty to simple assault and sent back for six to 12 months.

In the immediate days after the insurrection, conspiracy theorists falsely pointed to Samsel as a example of Antifa infiltrating the riot, bizarrely highlighting his jacket and backwards hat as giveaways. None of those claims have been supported by evidence.

Samsel is one of more than 130 people arrested in connection with the Capitol riot investigation. The U.S. Attorney for the District of Columbia said last week that more than 400 people who participated in the riot have been identified, though there may not be probable cause to charge all of them.