Salutes amid the sand dunes

In a Cape May beach, a tradition to honor veterans flourishes 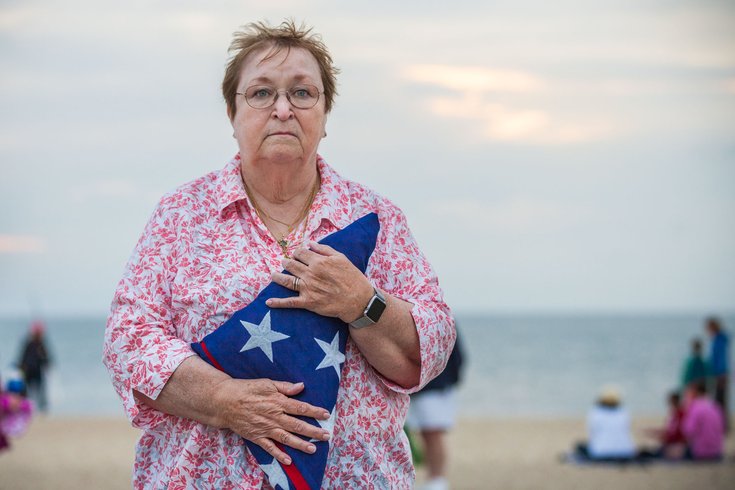 Kathleen St. John, daughter of Arthur St. John holds her father's casket flag against her heart after it was lowered and folded.

At the shore, the Fourth is about tradition, family, fun, beaches, and fireworks.

Come sunset at the state’s southernmost spit of land, Independence Day will be about tradition, family, patriotism, the flag, respect — and a solemn few minutes remembering a veteran of military service, beloved by friends and family, but honored by everyone gathered on New Jersey’s southernmost beach.

That’s the way it's been since the early 1970s, 175 times each year, at Cape May Point’s Sunset Beach, the shank end of New Jersey where the Delaware Bay rushes to meet the Atlantic Ocean.

Shortly after sunrise, from the Friday before Memorial Day until Sept. 30, a veteran’s casket flag goes up the modest flagpole at the edge of the vastness of the ocean.

The Stars and Stripes will snap and pop in the wind, seemingly unnoticed.

A line of vacationers will pull into the adjoining parking lot to buy reminders of their visit to the point, grab a bite at the grill, splash in the surf of the unprotected beach, or search for the polished quartz pebbles known as Cape May diamonds.

But at 20 minutes before sunset, the loudspeaker will crackle.

As though a drill sergeant had commanded them, attention will suddenly focus on the flag as it flaps in the late day breeze. 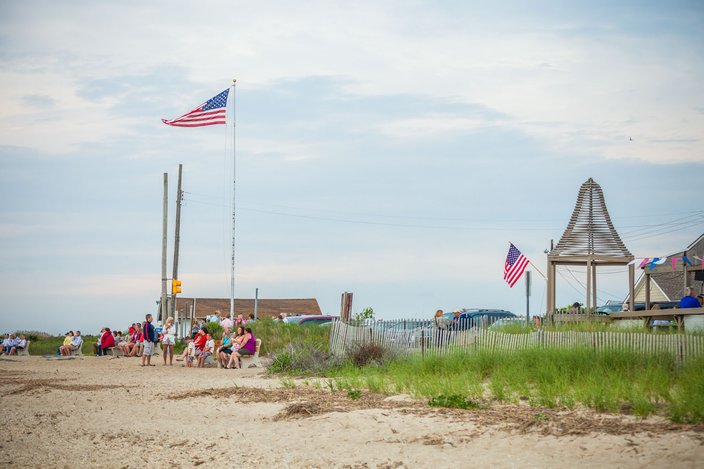 
Larry Hume, owner of the small businesses flanking the parking lot, will talk briefly about the late William H. Drebes, a Collingswood, New Jersey, resident who served as a boatswain's mate aboard the USS Manlove during WW II, escorting destroyer task forces, patrolling for submarines, getting damaged by an exploding Japanese aircraft.

Humes' father, Naval aviation machinist, Marvin Hume, began the flag tradition of honoring fellow vets soon after buying the property in 1973. “My father had a high level of patriotism,” says his adult son.

Hume says sometimes there are just two family members who turn out for the sunset ceremony, sometimes as many as 60, all dressed in identical T-shirts printed with their loved one’s name and something about their service.

As the Fourth winds down, Drebes’ daughter, Maureen Paulson, of Williamstown, an Ocean City summer resident, and other family members will be there.

In the distance, boats large and small will ply the bay, a fitting backdrop for recalling a Navy veteran who loved ships so much he often drove to the Delaware River just to watch cargo vessels cruise by.

“I’m sure he’ll be looking down from above,” says Paulson, a catch in her voice. She knows the significance of Independence Day would have mattered to her late father.

“He would cry. He’d be so ecstatic. He’d be so proud of America. He’d cry. And he would thank everyone.”

It took six years to arrange the tribute for Drebes: Reservations for the 175 available flag ceremony nights for 2015 took fewer than three minutes to fill when an annual computerized reservation service went live earlier this year. More than 13,000 people tried to lock down a date. Most were disappointed.

But the family of another WW II Navy veteran, Arthur St. John, managed to pin down a day late last month.

The family welcomed a reporter and photographer to witness the heartfelt and homespun ceremony so PhillyVoice readers could share in the meaning of the flag ceremony and get a taste of what will happen during the Fourth. 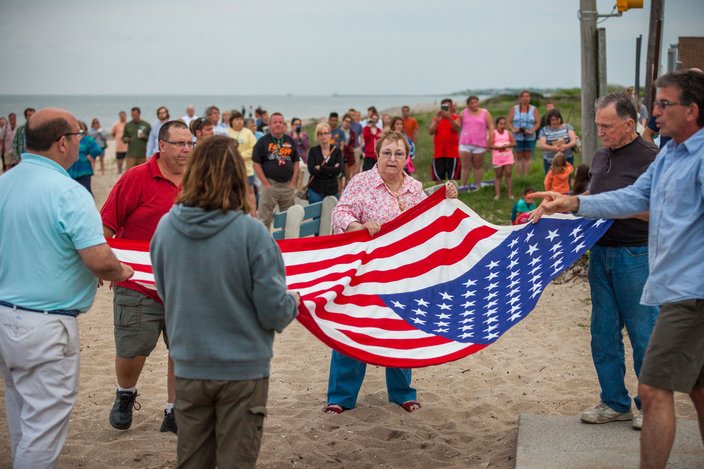 
St. John’s family, including daughter, Kathleen St. John, 74, of Runnemede, grandson, Bob Williamson, 51, also of Runnemede, and son, Bill St. John, 72, of Almonesson, used the gathering to remember a man who left school at 15 to earn an income for his family, never complained, and seldom explained what his life was like as a deep sea diver assigned to a submarine tender during WW II.

“When I was growing up, I knew he was in the Navy and I knew he’d retired from the Navy Yard. But it wasn’t until after he died that I realized how dangerous,” said Williamson.

“In his life, he was proudest of his service to his country and also of his family,” says Bill St. John, whose voice clots with emotion several times.

“He had respect for the flag. We had a real flagpole in our yard because of my dad,” says Kathleen St. John.

The family agrees about how Arthur St. John would have responded to the recognition: Embarrassed by the fuss. But also proud.

The ceremony itself is as modest, simple and straightforward as the man Arthur St. John’s family describes.

After a brief biography read by Hume over the loudspeaker, there is a moment of silence.

Next, a recording of Kate Smith belts out her trademark rendition of “God Bless America,” followed by the National Anthem.

A recording of a lone bugler poignantly plays taps.

The assembled crowd, perhaps 100, place their hands over their hearts. One man, wearing a ball cap emblazoned with his military service, comes to attention and salutes.

A hush blankets the beach. 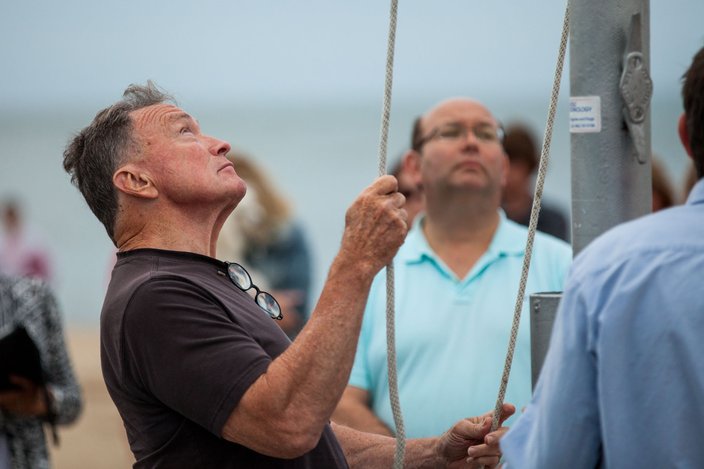 
When the colors come down, there is polite applause.

Family members, coached by the practiced hand of Hume, crisply fold the flag into a triangle.

And then it is done, just as the sun sets.

Paulson, who has seen the service done for others, is looking forward to the Independence Day ceremony.

“It is beautiful,” she says softly.