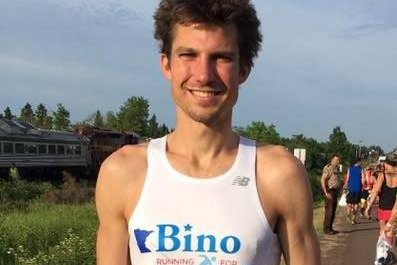 Michael Gibino, a Democratic delegate, is running from Minnesota to Philadelphia for the Democratic National Convention in July.

Bernie Sanders is all but out of the race for the Democratic nomination for president, but that's not stopping one of his supporters from quite literally racing to Philadelphia for him this summer.

Michael Gibino, a Democratic delegate from Minnesota, has started a 1,200 mile-run from his home state to Philly for the Democratic National Convention, which starts July 25.

He's running in hopes of raising money to pay for the steep costs facing delegates attending the convention, which reportedly range from $3,000 to $8,000 for the four-day trip to Philly.

Gibino spoke to radio station WIZM while stopping in Wisconsin Tuesday and explained how he's splitting up his trip:

Gibino runs in about 6- to 8-mile shifts. His friend (and "crew") Emily Denny - also a runner - rides ahead in the Bino mobile and waits, updating all the social media sites, no doubt. Or she backtracks on foot and runs with Gibino back to the car (runners are crazy).

And what's helping him stay motivated during the trek? He's a Minnesotan heading to Philly, so of course...

On his run, he, of course, has the entire Rocky soundtrack. He's hoping word will spread enough that entire towns will accompany him through the streets (but not up any large stairs).

The St. Paul native is used to running long distances. He told the Winona Daily News he already runs about 100 miles a week and commutes to work on the power of his own feet.

Gibino's been logging his daily journey on Facebook and a WordPress blog, and he's been finding places to stay by using two pro-Sanders networks — adoptaberniedelegate.com and fundberniedelegates.com.

He's not just raising money to pay for his stay, either, as he's also raising money for a charity that works to eradicate homelessness. Those interested in donating can go here or here.

If you want to see him before he gets to Philly, here's his itinerary: