NBC made a surprise announcement hours before the broadcast that after 11 seasons, Strong would be leaving 'SNL' 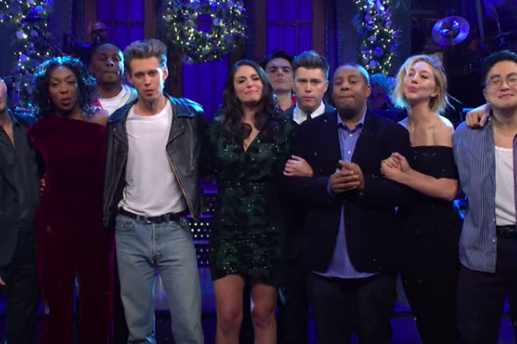 Cecily Strong was serenaded by the "Saturday Night Live" cast and host Austin Butler during Saturday's episode. After 11 years, Strong is leaving the show.

After 11 seasons with "Saturday Night Live," a beloved cast member has taken their final bow.

Cecily Strong, who joined SNL in 2012, appeared on the show for the final time last night. She said farewell by reprising a fan-favorite role and singing a tearful Christmas song with the cast.

Hours before the Dec. 17 episode, hosted by Austin Butler with musical guest Lizzo, NBC surprised fans by announcing that Strong would be leaving the show.

Tonight we send off one of the best to ever do it. We'll miss you, Cecily! pic.twitter.com/zsoGfw8SdP

"Tonight we send off one of the best to ever do it," SNL said in a post. "We'll miss you, Cecily!"

Strong has left her mark on SNL with iconic characters like "The Girl You Wish You Hadn’t Started a Conversation With at a Party," as well as impersonations of celebrities and political figures like Marjorie Taylor Greene, Kyrsten Sinema and Jeanine Pirro. She also previously co-anchored Weekend Update.

Appearing on Weekend Update, Strong (as Cathy Anne) said she was feeling "a little emo tonight, because, truth is, I’m here to say goodbye.”

She went on to explain that she was heading to prison due to the many crimes she had confessed during her various appearances on the show. Cathy Anne noted that she wasn't too scared of prison because of her friends "on the inside," as photos of SNL alumnae Kate McKinnon and Aidy Bryant in orange jumpsuits flashed on the screen.

"I had a lot of fun here," Strong said, slipping out of character to sincerely address the audience. "And I feel really lucky that I got to have so many of the best moments of my life in this place with these people that I love so much.”

The sentimental moments continued at the end of the episode when Butler, who played Elvis Presley in the 2022 film “Elvis,” joined Strong, Kenan Thompson and other members of the cast to sing an emotional version of “Blue Christmas.”

We love you, Cecily pic.twitter.com/XmQUpOOqgD

There was speculation that Strong would leave at the end of the 2020-2021 season, due to a powerful performance of "My Way" during a Weekend Update appearance that many perceived as a goodbye to SNL. But, she returned for the program's 48th season, missing the first three live episodes to perform in a one-woman show, “The Search for Signs of Intelligent Life in the Universe.”

Fans can now watch Strong on the second season of  “Schmigadoon!” streaming on Apple+, which, like SNL, is produced by Lorne Michaels.