Schools and government offices closed ahead of the storm 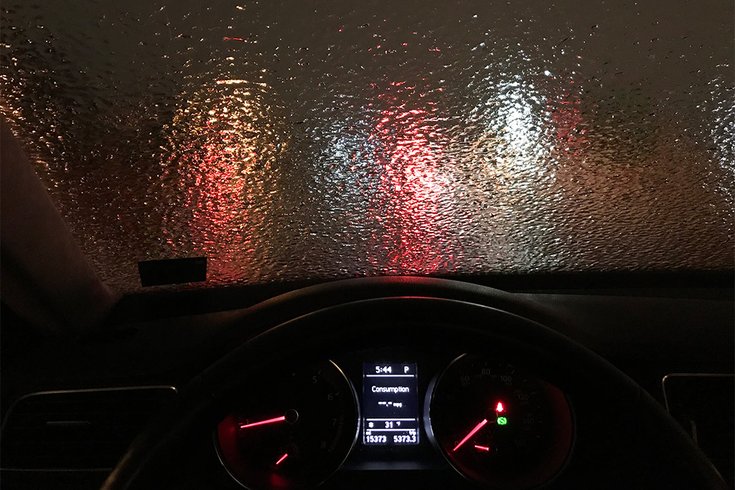 Icy windshields were greeting drivers across the region trying to get home during the Monday evening commute. This car was parked at PATCO's Ferry Avenue station.

Freezing rain has arrived across the Philadelphia region in time for the evening commute.

Streets and sidewalks were slick late Monday afternoon in Center City as the precipitation moved in from west to east. A winter weather advisory is in effect from through 9 p.m.

So far, however, there are few car accidents to report on major highways in the area.

Several area highways were under at 45 mph speed restrictions, including Route 422, the Northeast Extension, the Pennsylvania Turnpike (between Fort Washington and Plymouth Meeting exits), Route 309 (from Route 611 to north of Quakertown), the New Jersey Turnpike and the Garden State Parkway.

At 6 p.m., SEPTA was reporting many delays of 10-20 minutes on its Regional Rail routes. The Trenton line was operating with delays of up to 40 minutes in both directions due to Amtrak track issues, it said on Twitter.

Light freezing rain continued to fall at 6 p.m. at Philadelphia International Airport, which reported delays and cancellations. The airport advised passengers to check flight status with their airlines.

Earlier Monday, many schools across the region sent students home early ahead of the wintry mix that is expected to fall into the night.

The School District of Philadelphia dismissed students at 1 p.m. All after-school activities, including athletic events and professional development sessions, are canceled. The district's early childhood centers also are closing early.

The Archdiocese of Philadelphia also sent students at its Philadelphia high schools and parochial elementary schools home at 1 p.m.

The city also announced it will close its offices at 2 p.m.

In the suburbs, many other districts canceled classes early.

With the Philadelphia area warming up slightly, the precipitation is expected to be mostly sleet and freezing rain, according to the National Weather Service. Accumulation of up to a half-inch is expected.

The city also announced an extension of warming center operations at Cione Recreation Center, 2600 Aramingo Ave. due to continuing extreme weather conditions. The center will reopen for overnight hours at 10 p.m. Monday night through 7 a.m. Tuesday morning, when the Code Blue is expected to be lifted. The center serves individuals in need of shelter in the surrounding Kensington-Fairhill section of the city.

Seasonable temperatures – it will feel rather mild after our long cold streak – return Tuesday for a short stay.

Monday night: Freezing rain and sleet before 10 p.m., then a slight chance of sleet between 10 and 11 p.m. Low around 29. West wind 7 to 9 mph. Chance of precipitation is 80 percent. Little or no ice accumulation expected. New sleet accumulation of less than a half inch possible.

Tuesday night: Partly cloudy, with a low around 25. Northwest wind around 6 mph becoming calm in the evening.

Wednesday: Mostly cloudy, with a high near 38. Light and variable wind becoming south around 5 mph in the afternoon.

Wednesday night: Mostly cloudy, with a low around 32.

Thursday: A chance of rain after 1 p.m. Cloudy, with a high near 50. Chance of precipitation is 30 percent.

Thursday night: Rain. Low around 45. Chance of precipitation is 80 percent.

Friday: Rain likely before noon, then showers likely after noon. Cloudy, with a high near 57. Chance of precipitation is 70 percent.

Friday night: Rain likely. Cloudy, with a low around 48. Chance of precipitation is 70 percent.

Saturday: A chance of showers. Mostly cloudy, with a high near 52. Chance of precipitation is 40 percent.

Saturday night: Mostly cloudy, with a low around 30.

Sunday: Mostly sunny, with a high near 35.