Andrew Haught tells of the beating he received in Center City 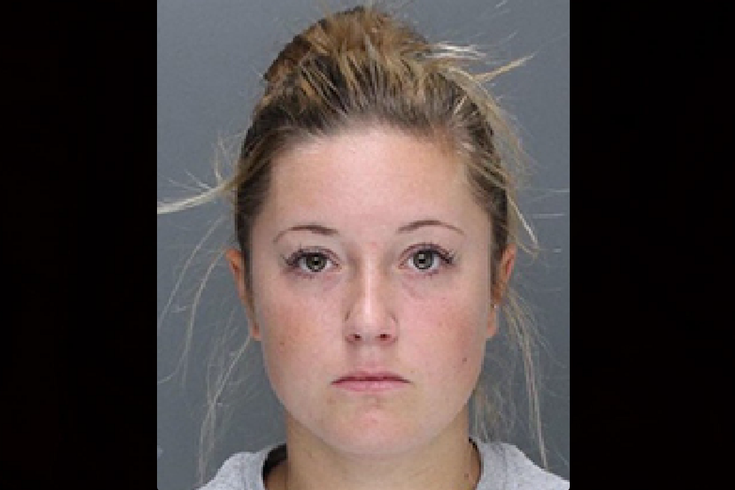 A Philadelphia man who suffered broken cheekbones and needed his jaw wired shut for eight weeks testified Friday in the trial of a Bucks County woman charged in the beatings of the man and his boyfriend.

Andrew Haught and his partner, Zachary Hesse, were allegedly attacked by three people as they walked to get pizza in Center City on Sept. 11, 2014.

Kathryn Knott, 25, of Upper Southampton, faces charges of aggravated assault, simple assault, conspiracy and reckless endangerment for her alleged involvement in the beatings. Two others – Philip Williams and Kevin Harrigan – pleaded guilty to their involvement earlier this year.

According to Philadelphia police, Knott, Williams and Harrigan were among a group coming from dinner at La Viola West when they encountered Hesse and Haught near 16th and Chancellor streets.

Haught, 28, testified that Harrigan called out "Is that you're f---ing boyfriend?" as he and Hesse passed the group. More homophobic slurs followed, then some pushing, with Hesse getting hit by several people in the group, including Knott.

"Everybody in this group was out to let us know that we were dirty f----ts," Haught testified.

As Haught went to intervene, he said he was "bear-hugged" by an unknown man and pushed away as people screamed homophobic slurs at him. He lost his glasses in the process.

Then Williams "out of nowhere" punched him several times in the face, breaking his cheekbones and jaw, Haught said. He ended up unconscious in the street.

"At first, I was in shock, but the minute my adrenaline wore off, I was in a serious amount of pain," Haught testified. "I could not work for a week. I'd never felt like that."

Dr. Andrew Miller, who performed the surgery as a chief resident at Hahnemann University Hospital, testified that Haught suffered fractures across his upper jaw and also to the side and floor of his right eye. Miller wired Haught's jaw shut with 16 screws measuring about seven millimeters each.

The jaw fractures were consistent with injuries sustained in an assault, Miller testified.

Haught spent five days in Hahnemann recovering from his injuries, drinking only broth while his jaw was wired shut for eight weeks and losing 15 pounds in the process. He said his gums grew over the screws in his mouth, making removal of the wire a painful and bloody process.

"They had to cut away a lot of my gum tissue before they could unscrew a lot of these screws," Haught said.

Under cross-examination, Haught testified that in a written statement he gave to detectives he described Knott as yelling f----t and pointing, but that he did not describe her as touching anyone.

Haught testified that he also spoke with a woman wearing a black dress during the incident. He did not recall whether the conversation was about finding his eyeglasses, but recalled the woman pointing at him. He denied touching her or pushing her arm away.

During opening statements Thursday, defense attorney Louis Busico told the jury that the incident escalated when Haught hit a woman and Williams charged him. "That's when all hell breaks loose," Busico said Thursday.

Haught also testified under cross-examination that he originally told detectives that he only could identify that woman and Harrigan. He later identified Knott to detectives, but said it was based on memory – not on images he later saw on television.

Prosecutors also called a third witness to the stand Friday. Michelle Moore, 21, was with two other people at a nearby bus stop when the incident occurred. The group, which included a witness who testified Thursday, ran toward the incident after hearing a loud noise.

Moore testified that she saw a woman with blonde hair and wearing a black and white dress punching a man on the ground. She later identified that woman as Knott to detectives. Her description of Knott's attire differed from previous testimony in the case, which indicated Knott was wearing a white dress.

Moore testified that she and her friends aided Haught until emergency personnel arrived.

The group also took Haught's bag from the scene, thinking it belonged to one of the perpetrators, Moore testified. She removed the cell phone, but left the bag and its contents at the bus stop. Moore testified she planned to sell or use the phone until she saw on the news that police were looking for the bag.

Philadelphia police Det. Ralph Domenic testified to the investigation completed by the Special Investigations Unit. He and another detective interviewed both victims and about 17 witnesses, including most of the group that had dined at La Viola with Knott, Harrigan and Williams. Each of the witnesses within that group brought lawyers to their interviews.

Investigators were unable to issue arrest warrants for any other members of the group because they lacked necessary identifications and corroborations, Domenic testified. They found no indication that anyone from the group had dialed 911 during or after the incident, when the group briefly went to Tir Na Nog, an Irish bar across from LOVE park.

Investigators recovered video depicting the crowd walking by nearby establishments both before and after the incident, he said. The latter video, from the Republic Bank, showed the faces of the alleged perpetrators and was distributed to the media when investigators were seeking their identities. He testified that investigators received tips within minutes of the video airing on television.

Domenic will complete his testimony when the trial resumes Monday.

Hesse, 29, testified Thursday that he was struck once by Knott and that she called him homophobic slurs. Hesse was surprised a woman would join in the alleged attack, he said.

"She was wearing a white dress," Hesse said. "She was screaming f---ing f----t in my face and swinging at me."

Hesse lost sight of Haught amidst the crowd, and when he found him, he said, he saw Haught topple after being hit in the head.

"I thought he was dead," Hesse said. "I ran over to him. I was completely startled by the whole situation."

Knott's two co-defendants, Williams and Harrigan, pleaded guilty earlier this year to assault and conspiracy charges. They were sentenced to probation and 200 hours of community service at an LGBT center.