Selection Sunday Roundup: Breaking down 'Nova’s draw and examining whether Temple got snubbed

According to the selection committee chairman, Fran Dunphy's Owls were the last team out 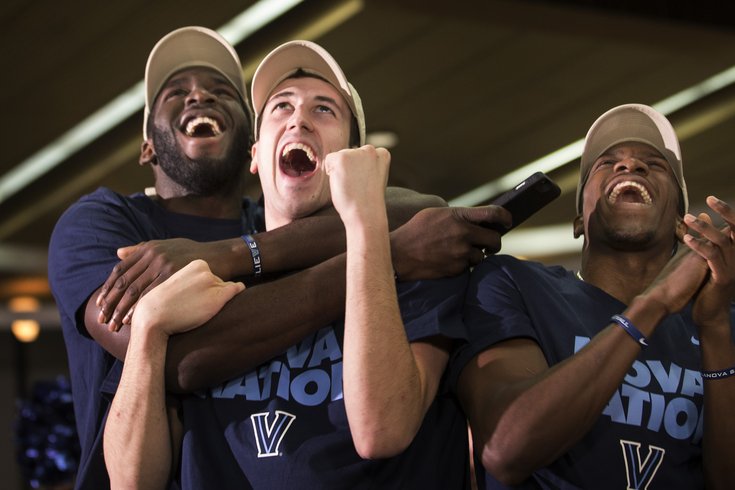 Villanova basketball players, Daniel Ochefu, left, Kevin Rafferty and Dylan Ennis react after the team was announced as a no. 1 seed in the Eastern Region of the NCAA Tournament Sunday. in Villanova.

Now that the bracket is set, the arguing has commenced. Be prepared to hear words like “sleeper” and “chalk” over the next three days more than you will over the whole rest of the year. Sure, the multiple guys in your office pool that try way too hard can’t name what state Wofford is in, but you bet they have a strong opinion on whether or not they’ll knock off Arkansas in the 5-12 matchup. From a sheer entertainment standpoint, Thursday and Friday might be the best two days of the year on the sports calendar.

On Selection Sunday, the news was mixed in Philadelphia: Jay Wright and Villanova mostly got the draw they wanted as the tournament’s second overall seed, while Fran Dunphy and Temple dealt with the painful realization that they were the first team on the outside looking in. Let’s start with the bad news first and take a deeper look at why the Owls were left out.

Temple barely misses out on the tourney

What happened? Scott Barnes, the athletic director at Utah State and selection committee chairman, just had to twist the knife, didn’t he? While being interviewed on the selection show right after the brackets were announced, he confirmed to the nation that the Owls were the best of the rest. “As you think about who stole bids, the win by Wyoming was obviously a challenge and kept Temple out,” Barnes said.

Think about this: Fourth-seeded Wyoming won its three games in the Mountain West Conference Tournament by a combined total of nine points, and five of those came from an overtime win over Boise State. Coach Larry Shyatt’s team caused Temple’s campus to collectively say “Holy (something that’s close to ‘Shyatt’)!” If you’re into dumb conspiracy theories that make absolutely no sense, this could possibly be considered Larry Nance, Sr.’s revenge against the city of Philadelphia for losing to the Sixers in the 1990 Eastern Conference playoffs. His son is the Cowboys’ (ANOTHER CONSPIRACY! THAT’S IT, THE NCAA HATES PHILLY! THEY’RE OUT TO GET US!) best player and a marvelous dunker from the looks of things:

Are there any teams in the field that Temple should have a gripe with? Allow me to preface this section by saying that if the Owls were dancing, they would’ve likely been the team that everybody left out pointed the long, but ultimately fruitless finger at. You know, sort of like what we're about to do here. Once the tourney committee makes it down to the bubble, every team has serious flaws in its résumé. Even so, it’s hard to make a case for UCLA being in the field at all, much less avoiding an opening round game in Dayton. Oh wait, of course I can:

UCLA is a college basketball blue blood, and fair or not, they’re always going to get the benefit of the doubt over schools like Temple and Colorado State. The tourney committee used a textbook old hockey trick by placing the Bruins well above the cut line in an attempt to take some of the attention away from their inclusion:

UCLA chilling like a boss at No. 42. Pass the LOLs, please. pic.twitter.com/oJ4AYclooi

Even after winning the national title last year with UConn, the American Athletic Conference had its second high-profile snub in as many years:

Temple not getting in is another sign the committee does not respect the American. Same with SMU last year.

Besides strength of schedule, the only areas where UCLA has a clear advantage over Temple are in its history and fan base. He’ll never complain, but I believe that Dunph has a legitimate gripe with the Bruins making the tournament over his team, especially considering the Owls’ worst loss came on Hawk Hill before either Jesse Morgan or Devin Coleman were eligible to play. In the interest of fairness, a couple of NIT teams (Colorado State, specifically) also have those same complaints. The lesson here for Temple is that leaving your fate in the committee’s hands is always a dangerous game. They just happened to get burned this time around.

‘Nova gets its one seed

What happened? On the day he woke up as a Big East champion for the first time in his life, I imagine Wright had two wishes for his team’s draw. First, he wanted to be the top seed in the East Region, which would allow the Wildcats to play in familiar places close to home for the entire regional, Pittsburgh and Syracuse. Second, he hoped that his Wildcats were on the opposite side of the bracket from “The Wildcats,” undefeated and overwhelming tourney favorite Kentucky. Mission accomplished on both fronts.

What about their first-round opponent? Just like last year when a potential Holy War rematch could’ve happened in the second (I refuse to call it the third) round, the NCAA likes interesting subplots in the opening games. There’s definitely a little Vince McMahon in the whole decision-making process behind closed doors. In this case, Lafayette coach Fran O’Hanlon played at Villanova from 1967-70 under Jack Kraft.

As everybody knows, a 16 seed has never beaten a 1 in the history of the NCAA Tournament, but ‘Nova’s record against the Patriot League doesn’t necessarily inspire a ton of confidence. Early in the season, they only defeated Lehigh by 11 on a neutral court and Bucknell gave the Wildcats everything they could handle at The Pavilion before ultimately falling by seven. Those two teams had better regular season records than the ‘Pards and Villanova is also a better team at this point of the year, but Wright’s group better come to play.

How about the draw in general? From what I saw, there were some mixed reactions when it came to the perceived strength of the East Region. CBS’ Clark Kellogg had the Wildcats going to the Final Four through what he felt was the easiest of the four regionals, while Doug Gottlieb and ESPN’s Jay Williams believed that ‘Nova will fall to North Carolina State in the second round. Needless to say, that scenario would be a pretty big letdown.

To me, Villanova got a break because Virginia might be the weakest of the two seeds if star player Justin Anderson can’t get healthy. The Cavaliers defend like crazy, but I can easily envision the Wildcats outscoring them if the two teams met in a regional final. N.C. State and LSU is an 8-9 matchup with a lot of talented players, but overall I think Wright should be relatively pleased with his team’s draw. The journey to the Final Four is always going to be filled with roadblocks, but there’s a pretty clear path to Indianapolis if ‘Nova can seize the opportunity. So far this season, Villanova has done little to indicate that they’re not likely to do so.