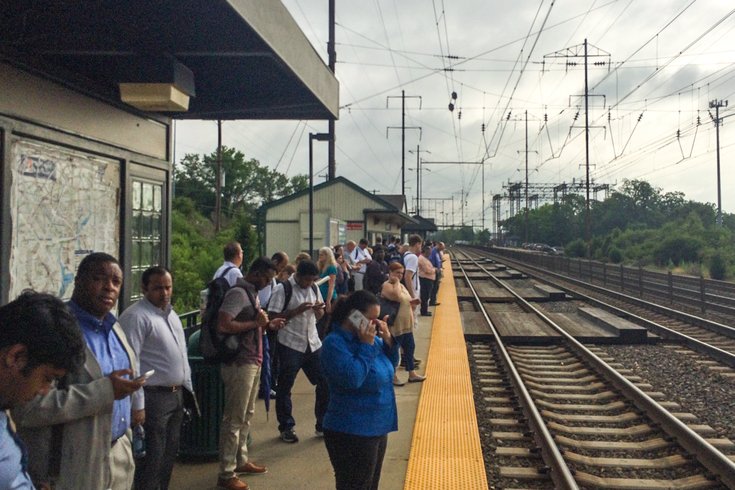 SEPTA's Regional Rail commuters on Tuesday morning were dealing with modified schedules, bypassed stops and crowded trains after 120 Silverliner V trains were removed from service to fix a structural defect.

Riders packed the platform at Cornwells Heights, a popular stop along the Trenton Line thanks to ample parking near the station. With one train running past the station every hour – with additional trains at 7:18 and 7:35 a.m. – riders waited as the 8:18 a.m. train slipped to 10 minutes, then 20 minutes late.

"I decided to take an earlier train, just to see what it would be like today," Christina Borkowski of Bensalem said as she waited for the train.

For the foreseeable future, Regional Rail lines will run on a modified Saturday schedule after the Silverliner V trains – a third of SEPTA's fleet accounting for about 13,000 seats – were taken out of service after inspectors found a defect in the suspension system. Most lines will have extra trains scheduled in the morning and evening.

RELATED STORY: Want a refund for your SEPTA pass? Better mail it in quickly

Borkowski said she would bear the inconvenience if it meant the trains would be safe.

"What choice do they have?" she said. "I don't sweat this stuff. It's better than white-knuckling it down the Turnpike."

Dave Tolbert, of Fairless Hills, also decided to take an earlier train in order to ensure that he could be at work on time. But he said he has two jobs and is nervous to see what the crowds look like during evening rush hour, because he has a tight schedule.

"The real nightmare is going to be tonight. People pack the trains on a normal night," he said. "I have a second job, so I'm going to be on a timeline."

Asked about the service impact, Tolbert agreed that SEPTA needed to do the work to ensure rider safety, but he wondered why the relatively new trains needed repairs already.

"I don't know what else they can do, really. This train is 20 years old," he said, while riding a Silverliner IV car on the Trenton Line train. "Those are the new ones. Why are they having all these problems?"

SEPTA paid $274 million for 120 Silverliner V trains from Hyundai-Rotem USA back in 2010. However, due to delayed deliveries from the manufacturer, the last car didn't enter service in the city until February 2013.

"I'm just a little upset," said Kevin Sloan, of Souderton, as he waited for a train at SEPTA Jefferson Station at 10th and Market streets.

"I came here thinking we'd have to pay weekend rates," he said. "But, they are charging weekday rates for weekend service."

Carla Showell-Lee, director of media relations for SEPTA, said Tuesday that the transit company hasn't yet determined how it will handle refunds for riders or the possibility of changing ticket prices due to the modifications to Regional Rail service.

"We are in meetings right now to discuss these questions as they are coming out," she said in a morning interview. "We are going to address this."

She also said that, as of 10:30 a.m., it was too early to talk about how many trains may have missed stops or made late arrivals.

SEPTA should have information on both morning commute and refunds by Tuesday afternoon, Showell-Lee said.

'WE'LL SEE HOW BAD IT GETS'

Delays early Tuesday morning delays were ranging from a few minutes to over a half hour. On the train, riders on the Trenton Line packed the aisles, filled every available seat and stood front to back, during the morning rush hour, but the 8:18 a.m. train made all of its scheduled stops.

As rush hour got underway, SEPTA spokeswoman Heather Redfern said that overall, "so far, so good." Because it was the day after a holiday, demand was not as great as on a typical workday. Still, commuters said seats were hard to find.

"It made it difficult to get in after a long weekend. It was more crowded," said Lynne Suher, 64, who left home 40 minutes earlier than normal for her ride to the city from the suburbs. "But it seems like some people have off this week because of the holiday so we'll see how bad it gets."

Mike Williams, of North Philadelphia, said he, too, was frustrated by the changes to SEPTA schedule. He joked that most days, he finds himself fighting to catch trains in order to stay on his own schedule. Tuesday, he said, as he stood on the platform at Jefferson Station, Williams said he was already late, likely thanks to the modified Saturday schedule.

"It's a little frustrating," he said. "I'm late and I don't know if it's the train or me. They need to come up with a better solution."

Later in the morning, the situation improved.

The Doylestown-to-Center City train due at the North Hills station at 10:58 a.m. was about 15 minutes late. When the six-car train rolled to a stop, six passengers boarded to find open seats.

Not everyone found their schedules altered drastically due to SEPTA's changed to Regional Rail. Sean Biggs, of Cherry Hill, Camden County, at Jefferson Station on Tuesday morning waiting to catch a train to the airport, took it all in stride.

Biggs said he planned to take an early train anyway, just so he didn't miss his flight.

"I'm not too bothered. This is about the same time I would have taken the train anyway," he said.

At a Fourth of July news conference, Ron Hopkins, assistant general manager of operations for SEPTA, said the safety action would have obvious future effects.

In fact, Hopkins said, in his 26 years working with SEPTA, losing so many trains at once is an "unprecedented" predicament.

"This is unprecedented and, as I said, we want to get our hands around it," he said.

On Friday, SEPTA discovered issues with the suspension systems on all but five of SEPTA's Silverliner V trains. Hopkins said that even those remaining five have been taken out of service as the agency determines options to repair the issue.

The problem stems from cracks found on equalizer beams in the suspension systems on the trains. It's a problem that, Hopkins said, SEPTA hasn't yet determined what it could cost to fix or how long it will take to get the trains repaired and back in service.

"We are tracking costs right now," he said. "We have a lot of things that we are moving on. The biggest thing, in the short term, is how do we get them back into service."

On an ordinary day, Hopkins said, the Regional Rail system moves about 65,000 riders. With these changes, he said, Regional Rail will likely only be able to move about 35,000 to 40,000 people in a day.

SEPTA is encouraging Regional Rail riders to use the subway system if possible. There will be 1,900 additional parking spots available – 1,600 at the former Naval Hospital at 1600 Pattison Ave., near the Broad Street Line's AT&T Station, and 300 at a lot at 601 N. Columbus Blvd., near the Spring Garden Station - in order to allow more commuters to use the subways to get into the city. 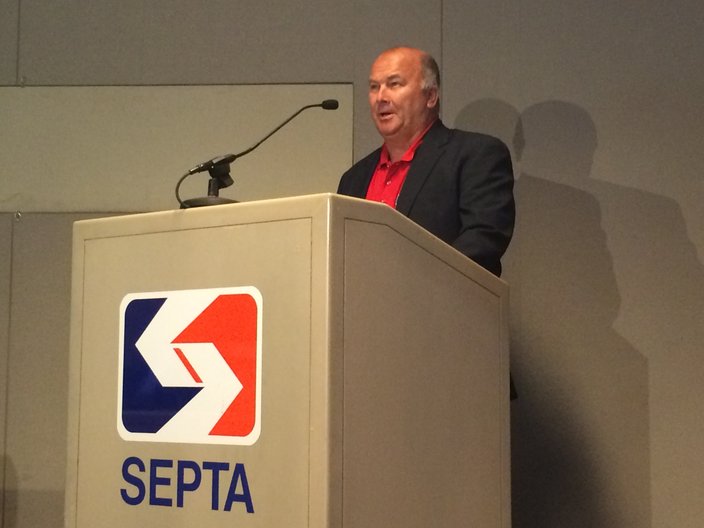 SEPTA's Assistant General Manager for Operations, Ron Hopkins, announced how the transit system will operate on a modified Saturday schedule after 120 Silverliner V trains were removed from service due to an issue with their suspension systems.

Parking fees will be waived at Frankford Transportation Center until the trains are back operating at full capacity.

And subway trains will run more frequently, with wait times as short as four minutes during rush hour.

Additional buses may be available as well.

Just what can be done to get the Silverliner V's back in service is evolving as well. Hopkins said SEPTA isn't sure if the answer will be to replace the damaged components or repair them. Also, he said, SEPTA is inspecting older cars that have been taken out of service to determine if they can be brought back in order to help ease potential travel issues moving forward.