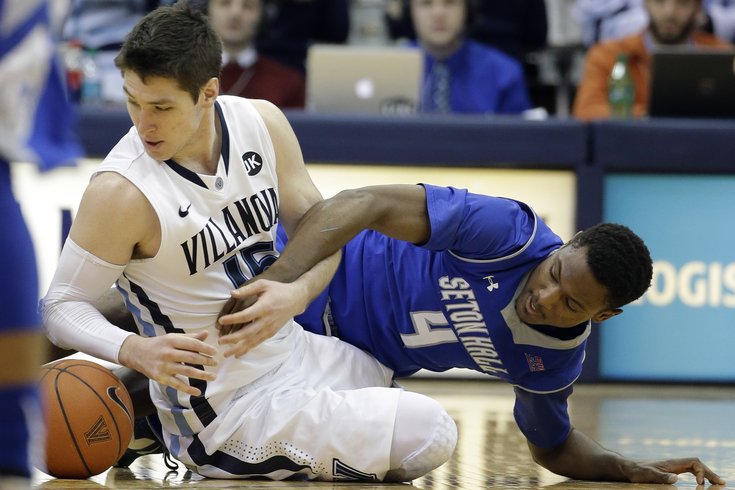 Villanova's Ryan Arcidiacono, left, battles for a loose ball with Seton Hall's Sterling Gibbs during the second half Monday night.

SOUTH ORANGE, N.J. — Seton Hall suspended leading scorer Sterling Gibbs for two games for delivering a forearm to the face of Villanova's Ryan Arcidiacono in the second half of their Big East Conference game in Philadelphia on Monday night.

Gibbs will miss games at St. John's on Saturday and at home against Creighton on Feb. 28, the school said Tuesday.

"Sterling demonstrated poor sportsmanship last night, and he recognizes that what he did was wrong and that he must be held accountable for his actions," coach Kevin Willard said in a statement. "This was out of Sterling's character, and I believe this incident does not define the type of person he is or will become. Sterling will learn and grow from this unfortunate event."

Gibbs hit Arcidiacono after the Wildcats' guard dived to control a loose ball with Villanova enjoying a big lead.

Gibbs, who has averaged 16.7 points in starting all 26 games this season, apologized to Arcidiacono, his family, friends and team on Twitter after the game, saying "that's not who I am."

"My emotions get the best of me and that wasn't acceptable at all," Gibbs tweeted to Arcidiacono. "I hope you're alright and I will face any consequences coming."

"Emotions sometimes get the best of us," he wrote. "heat of the moment thing. We're all good."

The Pirates were already short-handed in the backcourt after starting guard Jaren Sina left the team last week.

"We support Seton Hall's decision to suspend Sterling Gibbs for his actions in the Villanova game," Big East Commissioner Val Ackerman said in a statement. "Unsportsmanlike acts like the one that occurred last night have no place in the Big East or college sports."