Shot seven times a month ago, Delco police officer can't wait to get back on the streets 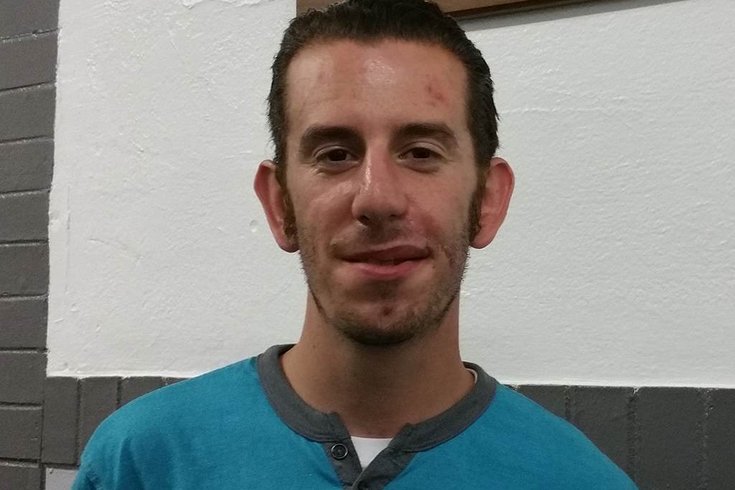 Chris Dorman, a part-time officer with the Folcroft Police Department in Delaware County, was shot seven times as a routine call quickly became violent. He said the near-tragedy brought his fellow officers closer together. "We all learned something from it," he said.

He shouldn’t be sitting here. It’s a mathematical certainty.

The damage is barely visible. A jagged scar runs down from his left nostril and winds around his left cheek, and a pock mark remains on his right nostril.

But Dorman begins to laugh, as his eyes emerge from just underneath the bill of his white baseball cap.

“I do have a big nose,” he said, leaning back and pointing to the tip of his nose, chuckling again. “When they took me into the hospital, the doctors told me that my nose took the force of the bullet [and] prevented it from hitting any facial bones or taking any teeth out. One doctor actually said the size of my nose saved my face.

"Hey, the other side of that is if my nose wasn’t so big, he might have missed me completely.”

It’s good Dorman can walk, and talk, and do a lot of things again — like breathe.

Less than a month ago, he was shot at seven times in broad daylight by a man just out of prison.

Already, he can laugh about it.

Dorman, 25, a part-time Folcroft Borough police officer, was on patrol at 10 a.m. on June 24, when he responded to the rear of an apartment complex in the 1500 block of Elmwood Avenue to investigate drug activity. He was approaching people suspected of smoking pot when the shooting started, he explained. Dorman sat down with PhillyVoice for a lengthy interview recently to talk about that day.

Seven times, he was fired on by Abdul Wahi, 33, also known as Donte Brookes Island, a career drug dealer who was just released from federal prison after serving a 15-year stint.

In addition to the shot to the face, Dorman took two bullets to the left leg and two others in the hip. One slug went off the front of his protective vest and another behind. (Wahi surrendered after SWAT officers stormed the apartment building, and is charged with the attempted murder.)

“A witness told us it was like a movie, because each time Chris got hit, he kept getting back up .... They said Chris must be one tough SOB,” said Folcroft police Chief Robert Ruskowski, who from his office window can see the red brick apartment complex up the street where Dorman was shot. “Chris was shot through the legs, groin, chest, back and face and he still got up and was able to run. It still makes me shake my head.

"Folcroft has one of the best police departments in Delaware County to work for. I don’t think there is any question about that. This is a family here." – Officer Chris Dorman

"Chris is one of those few-and-far between. Some get it right away, some take longer. Chris caught on so fast," Ruskowski said. "You know you’re going to lose him (as a full-timer to another municipality), because he’s that good. You don’t want to lose to him, but it’s unfair to keep him because he’s that good."

At the time of the incident, Dorman was cramming 60 hours a week of part-time work between Millbourne Borough and Folcroft. He lived a career’s worth of tragedy in one morning. Yet, he’s yearning to get back on the street during a volatile time right now in the United States where it seems to be open season on cops.

With his five wounds in varying states of recovery – a graze on his right calf is healed but the wounds in his left thigh require further treatment – Dorman only wants one thing: to get back on the job. Seeking a fulltime job as a policeman, he’s up for a job with the SEPTA Police Department.

Folcroft police Officer Chris Dorman, center, is joined by Chief Robert Ruskowski, left, and Sgt. Chris Eiserman. 'A witness told us it was like a movie,' Ruskowski says, 'because each time Chris got hit, he kept getting back up .... They said Chris must be one tough SOB.'

'I WANT TO GET BACK TO WORK'

“As time goes on, I’m a lot more appreciative of everything; my attitude is never going to change,” said Dorman, who’s beanpole thin at 5-foot-10 and maybe 140 pounds. The son of former Folcroft Councilman George Dorman, he is a 2008 graduate of Academy Park High School in Sharon Hill, Delaware County.

“I’m always joking around, trying to make everyone else around me happy, and hey, I’m not so upset that I have a big nose anymore. You can write that down. I’m ready to get back to work. I don’t really like the attention from all of this, to be honest. But it’s something that I’m getting used to."

He has seen an outpouring of support from police departments across the country and individual law enforcement officers from as far as Alaska. In the weeks since the attack, Dorman has had time to heal and reflect.

"I can’t put it into words the job this small community did that never, ever dealt with something like this.” – Folcroft police Chief Robert Ruskowski

“I’m sleeping better than ever. I haven’t had any nightmares about what happened. I want to get back to work," he said. "I was shot seven times and the doctors tell me I won’t have anything wrong later in life ... I have another skin graft on my right nostril. They want to do the skin graft to make sure my nose looks as normal as it can. I don’t know if anyone can do that, but ...."

The incident brought the local law enforcement community together even more.

“I know what happened to me is a really bad situation, but ... if it brought the law enforcement community even more together in this area ... and it brought us a lot closer as a community in how many people have shown support for us, considering what’s going on today as policemen being targets and criticized for everything they do wrong, I’ll take that,” he said.

It also strengthened the bonds of the Folcroft police family.

"I may be a little biased because I work here, but even if I wasn’t working here, Folcroft has one of the best police departments in Delaware County to work for," Dorman said. "I don’t think there is any question about that. This is a family here, and as messed up as it is, this whole situation brought us a lot closer. There are guys in this department that never went through anything like this. We all learned something from it."

Dorman doesn’t see himself as a hero, despite getting up and alerting the other responding officers that to the danger on-scene. He’d rather steer that focus to fellow Folcroft police Officer David DePietro, who drew fire from Wahi to save Dorman’s life, and police Sgt. Bill Bair, who arrived at the scene and scooped up Dorman and got him to Mercy Fitzgerald Hospital in just three minutes.

But Ruskowski and Sgt. Chris Eiserman consider Dorman a miracle, someone they agree “is one gutsy kid.” They know a very explosive situation was handled professionally. No one was killed. The assailant was taken into custody unharmed. And Dorman will make a full recovery.

“If I didn’t have that vest, I wouldn’t be here.” – Officer Chris Dorman

Ruskowski said his department received considerable support from law enforcement agencies in the region, including the FBI, Philadelphia police and Chester County officials.

He agreed that the incident drew the best from his officers.

"DePietro and Bair are the heroes, too," the chief said. "It was a job that was done, and how it was done, that was unbelievable. It’s why I’m proud of my guys. It’s why I’m proud to be a part of this area — because all the surrounding departments have a reason to be proud. It was textbook how this was handled. We did it right — we all did it right."

Area police departments even helped to block intersections to speed Dorman's trip to the hospital.

"I can’t put it into words the job this small community did that never, ever dealt with something like this,” Ruskowski said.

It was a call like many others: a subject smoking marijuana or perhaps selling drugs, Dorman recounted.

“I asked (Wahi) what he was doing and he said he wasn’t doing anything and turned around and punched me,” he said. “Then that’s when he shot me, a few seconds after that.

"My adrenaline was going pretty high at the time ... and I was just thinking about getting out of there at that time. I felt a couple of bullets. One of them knocked me down, but my adrenaline was going so high I had to get up. I wasn’t going to let him win. I needed to be calmed down by Sergeant Bair, but once he calmed me down, I was able to talk to him and give him a description of the guy.”

Dorman didn’t understand the severity of the situation until he saw his own blood on the dashboard of Bair’s vehicle. The bulletproof vest he was wearing saved his life, he said.

“If I didn’t have that vest, I wouldn’t be here,” said Dorman, whose medical expenses have been taken care of, but is missing his living expenses since he’s not working.

"I still want to go into police work, even after being shot seven times. I absolutely want to do this. It’s the best job ever," he said. "The awesome guys I get to work with – the older, more senior guys and the knowledge that they pass down to you. Guys from other departments that I get to meet.

"I’ve lived in Folcroft my entire life and I always wanted to give back.”