What they're saying: Should the Eagles franchise tag Jeremy Maclin? 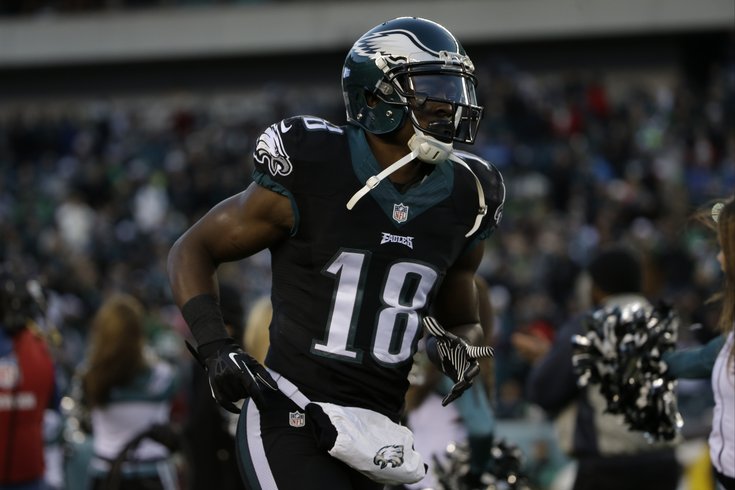 Jeremy Maclin is going to get paid.

Today is the deadline to franchise tag soon-to-be unrestricted free agents, and the Eagles have a difficult decision to make on Jeremy Maclin. That, and more, in "what they're saying..."

Howie Roseman on trading up in the draft: Zach Berman, Inquirer

Roseman was not discussing Mariota or any specific player, but rather the topic of draft-day trades.

"When you’re looking at trading up, at some point, your board drops off so dramatically in terms of how you evaluate that player,” Roseman said, as heard on the conference’s webcast. “But the history of trading up for one player, when you look at those trades, isn’t good for the team trading up and putting a lot of resources into it.

"Because the guys who are really good at the draft, if you’re hitting on 60 percent of your first-round picks, that’s a pretty good track record. And then it’s dropping as you go through the rounds. So really, the more chances you get, the more tickets to the lottery you get, the better you should be doing.”

#JimmyNote - In the past, Roseman was more likely to trade down than trade up, and I don't necessarily disagree with his view on putting together a huge package to move up for one player. However, as the jerk principal from the Breakfast Club found out in Die Hard, Roseman isn't in charge anymore.

The Dallas Cowboys have one franchise tag to use on March 2, and Cowboys Vice President Stephen Jones made clear Saturday that tag will be used on wide receiver Dez Bryant.

Jones described talks with unrestricted free agent running back DeMarco Murray's agents as "slow" up to this point.

"[Murray] is probably going to, you know, get some peace and see what's out in the market and then we'll talk and see. I do believe deep down he'd love to stay in Dallas."

#JimmyNote - The Cowboys rode Murray last season like they knew he'd be gone. If you include the playoffs and Pro Bowl, Murray touched the ball an absurd 501 times (439 carries, 62 receptions). Behind a great run-blocking OL, the Cowboys controlled the football by feeding Murray repeatedly, which in turn opened up the passing game and kept their shaky defense off the field.

If the Cowboys lose Murray and can't replace him with a talented workhorse back, they're going to struggle to have the same success their offense had a year ago.

To tag or not to tag: Tommy Lawlor, Iggles Blitz

Reason to do it…safety.  You ensure Maclin is here in 2015 (and hopefully beyond). If you don’t tag him, there is no guarantee a deal will get worked out. Can you afford to lose him and get nothing in return?

Reason not to do it…money. The tag carries a cost of just under $13M and that would eat up about half of the Eagles salary cap space. They could still try to negotiate a long term deal, but Mac may be fine with just playing for the $13M and then facing the same situation next year. The difference is that his price tag as a franchise player would go up automatically.

A few reporters seem to think the Eagles won’t tag Maclin. Maybe they know something I don’t. I think you almost have to. If you lose him, Jordan Matthews becomes the key to your passing game. Suddenly you have to sign another WR or draft one early. I certainly don’t want to commit that much money to Mac for a year, but there is so much uncertainty at WR I’m not willing to risk losing him.

#JimmyNote - I disagree with Tommy here, but not with a lot of conviction. Once you start going down the franchise tag rabbit hole, it can be a never-ending exercise. If the Eagles tag Maclin and he has another big season, do you tag him again? That'll cost you 120% of his previous year's salary, or almost $16 million. Certainly that will never happen, so you're looking at Maclin hitting free agency a year from now anyway. You may as well deal with him now instead of putting off that pain until next offseason.

Maclin signed a "bet on self" contract a year ago, and look at how that worked out for him. Unlike other players around the league, Maclin seems smart enough how lucrative getting slapped with the tag can be. Playing for one season at $13 million could be extremely appealing to him, and would give him the upper hand in negotiations for any sort of long-term deal.

Then again, if you lose him, as Tommy notes, you don't have much at receiver aside from Matthews.

The Philadelphia Eagles recently had a tough (but necessary) cut to make by releasing offensive lineman Todd Herremans. The 10-year veteran was the team's longest tenured player on the roster. The 32-year-old guard was also known for being a good guy off the field.

Keeping with this theme, the Herrdawg sent out a heartfelt message to Eagles fans on Saturday morning:

I love you Philadelphia. You will always be a huge part of who I am. Thank you from the bottom of my heart!

#JimmyNote - Yep. The ToddFather was among my favorite Eagles to cover.