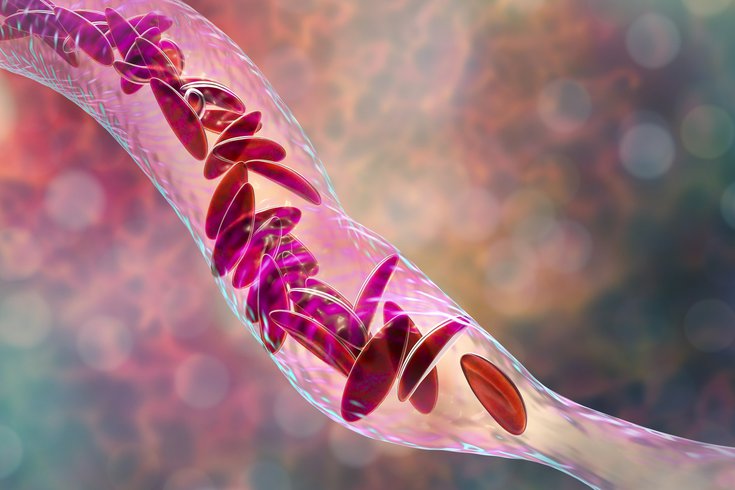 Sickle cell disease is the name for a group of disorders that cause some red blood cells to be misshaped and sticky. This limits their ability to easily move through blood cells and carry oxygen throughout the body. More than 100,000 Americans have sickle cell disease, making it the most common inherited blood disorder in the United States.

Most people are diagnosed with sickle cell disease when they are very young. As a result, their parents or guardians usually are the ones initially facing decisions about how to treat it.

The causes and symptoms of sickle cell disease

Hemoglobin is the protein in red blood cells that carries oxygen. In people with sickle cell disease, it forms into stiff rods. This causes the cells to be inflexible and shaped like sickles or crescent moons instead of discs.

Sickle cells usually only last between 10 and 20 days, as opposed to 90 to 120 days for normal blood cells. That can lead to a shortage of red blood cells, which can cause anemia, a condition in which the blood doesn’t carry enough oxygen to the rest of the body.

Sickle cells also can get stuck as they travel through small blood vessels, creating blockages that slow or stop blood flow. That can prevent oxygen from reaching nearby tissues, causing attacks of sudden, severe pain called crises, which can last from hours to days. The blockages also can cause ulcers on the lower legs, diminished eyesight, and small strokes that can lead to confusion or problems thinking.

Other symptoms of sickle cell disease can include fatigue, paleness, a rapid heart rate, shortness of breath, and jaundice, a condition that makes the eyes and skin turn yellow.

Work is progressing on gene therapies. With this approach, stem cells are collected from a person with sickle cell disease, genetically altered to make them produce normal hemoglobin, and inserted back into the person.

People with the disease may have to receive blood transfusions to prevent and treat its complications, but this treatment method does carry risks. One risk is an immune response to the donor’s blood, which can make finding future donors difficult. Another risk is that iron may build up in the body, and treatment may be needed to reduce it.

Sickle cell disease also may be treated with hydroxyurea. This drug encourages adult bodies to make fetal hemoglobin, which increases the number of functional red blood cells they have. Other recently approved drugs stop sickle cells from sticking to blood vessels.

People with sickle cell disease need to find a doctor familiar with it and see them as often as needed. It’s also important that they learn what to do in a pain crisis, keep up to date with their vaccinations, and live a healthy lifestyle.

A 2017 study found that 35 percent of people with sickle cell disease suffered from depression, which likely had a negative impact on their physical health. To combat that, they can turn to mental health providers or patient support groups.