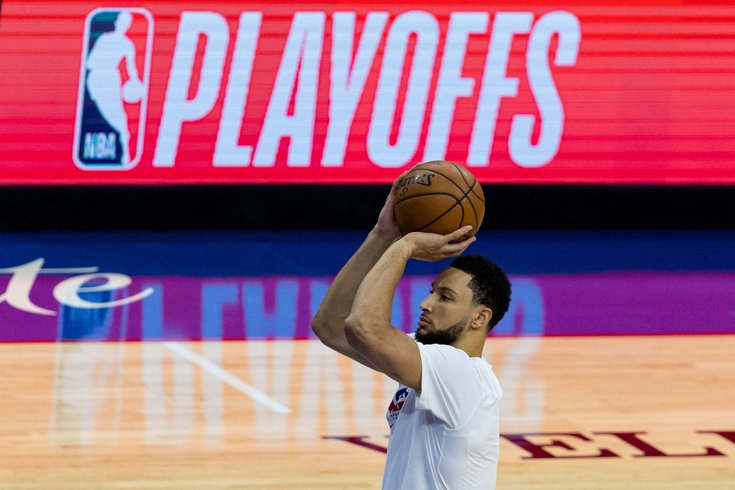 The Philadelphia 76ers have a Ben Simmons problem. And right now there appears to be only one solution.

In the wee hours of Friday morning, Daryl Morey wasn't interested in discussing the rumors swirling around his team or the health of his franchise player. It was an understandable mindset for a guy who had just completed an hours-long draft that is the culmination of hundreds of hours of work and debate, and the culmination of a lifetime of work from the young men selected.

“Frankly I'm focused on the draft and the three guys excited to be here,” Morey told reporters Friday. “We're back in the office tomorrow with the staff and have a lot of important work to do on the roster going forward."

Those three players, along with young guys already in the program like Tyrese Maxey, will certainly have their say in the future of the Philadelphia 76ers. But the big domino many expected to fall on Thursday remains standing, and until the Sixers reach some sort of conclusion in the Ben Simmons saga, the rest of their future remains murky.

Any expectation that Simmons would be moved on draft night seemed based on hope, rather than anything said within the organization or reflected in their talks with teams around the league. Throughout the pre-draft process, team sources made clear that Philadelphia was in no rush to make a deal for the sake of making one. There were laughs regarding the idea of, for example, a trade exchanging Simmons for role players like Sacramento’s Buddy Hield and Marvin Bagley. Whenever and whoever you ask around the organization, the ideal return sounds mostly the same — an All-Star to help them compete now, and perhaps more on top of that, depending on who the player is coming back.

To this point, the Sixers have shown no interest in settling. Leaks around the league line up with that thinking, each reported offer from Philly's end over the last few weeks more ambitious than the last. All the young players and draft assets in Cleveland, multiple lottery picks and future firsts from Golden State, we were only a report or two away from Daryl Morey asking for an executive's first-born child or the deed to an arena. The Sixers have demanded your best offer, not just an offer, both because of what they feel Simmons is worth and what they think they need to push forward.

Take Portland, for example. CJ McCollum for Simmons was a proposal floated in the early hours following Philadelphia’s second-round exit, a panacea for both sides to relieve fit issues. The week of the NBA draft, rumors circulated to the effect of Philadelphia having “renewed interest” in such an arrangement, despite Sixers sources insisting there was no initial interest that could be renewed in the first place. Should the Sixers make a Simmons-related deal with Portland, there is one guy sources (and frankly, common sense) say they have their eye on — Damian Lillard. And they’re not inclined to do much to help Portland try to get better as he sorts out his feelings on staying.

(Whether McCollum is actually available or not is another story, with Portland exec Neil Olshey notorious in some circles for overvaluing a player he views as "his" guy and draft find. This actually works in Philadelphia's favor, because if the Blazers won't explore deals using their most valuable non-Lillard chip on the roster, logic suggests this marriage will end sometime in the near future.)

As the combative leaks have poured in from both sides of trade talks, some members of the organization have dug their heels in. If the right offer doesn't come in, they say, we're content to wait this out and attempt to work with Simmons in the offseason, in the hope that meaningful improvements help the team and render a trade unnecessary.

Scoff if you want, but it’s hard to call that false bravado for a team with Daryl Morey at the top of the basketball ops chart. If there's something Morey has made clear over his career, it's his willingness to live with discomfort in the chase of bigger potential gains.

Morey has shrugged off potential issues with personality types and fit in order to chase talent. Teams under his watch have played dogmatic basketball at times, turning their nose up at backup plans. He once told reporters Chris Paul was staying in Houston before dealing him to Oklahoma City (though there were driving forces not named Morey behind that one). Morey went deep into talks for James Harden last season, knowing they'd have no choice but to keep Simmons and other players in the loop on the situation, never fearing awkwardness or showing concern for anything other than making the basketball team better.

And to be clear, it is not that difficult to see a future where they wade through some tension in order to rehab Simmons' value or rehab him as a player. A win over the Atlanta Hawks was possible with Simmons just playing relatively normal basketball. The moment did not require him turning into a descendent of LeBron James or Magic Johnson or whoever else he has been compared to over the years. They simply need him, frankly, to not be completely broken as a player. With his career at a crossroads, betting on Simmons to take this moment seriously and accept more help and feedback isn't the craziest idea in the world.

But there will be a point this offseason where sitting in the middle ground, the murky waters between facilitating an acceptable trade or committing to restoring him, will not be sufficient. It may be as soon as next week. On Monday, August 2nd, teams can begin negotiating with free agents, able to actually sign them by August 6th. Navigating the opening of free agency and building a coherent (and improved!) roster while charting development paths for prospects is a bit tough when one of your most important players is just sort of floating in the ether.

As presently constructed, the Sixers can't just plug and play the average NBA player in and expect things to hum. You could argue they don't really know, five years in, exactly where to put Simmons in a lineup. We've gone over what moving Simmons to forward changes and how it matters or doesn't, and there are a lot of downstream effects of keeping him here when the games start.

We've been over his most prominent flaws, but one of Doc Rivers' best qualities is his ability to set a hierarchy to start a season and let things flow out of that. It's considerably tougher to do that when you are waiting around for a trade opportunity that might come that you might have the best offer for, leaving your primary initiator wondering if he's welcome or wanted. Based on recent reporting (and again, common sense) it doesn't seem like Simmons is dying to come back here next year either, with the weight of increasingly impatient fans, media members, and team members bearing down on him. There would be plenty who say silly things like, "He's not cut out for Philly!" but that sort of talk is over the top. It's hard to blame him if he's looking to the exit in search of a situation where he has more room to try and fail.

Even if you make clear to all parties that you're going to try to move him at the deadline and just grit your teeth through the first half of the year, that's a pretty bad solution for different reasons. A big chunk of the justification for moving Simmons is to try to capitalize on Joel Embiid's prime while he's still in it. Nobody reasonable would suggest you could completely shift your core midseason and have an honest shot at the 2022 title, even if you were to get a pie-in-the-sky outcome like acquiring Lillard. If you move further down the star or potential star list, that fact is even more glaring.

Regardless, a trade of that magnitude requires a period of learning together, chemistry building on both ends, and establishing trust in one another as teammates. That's hard enough in a full year, let alone half of one, before we even get to things like the needed changes in surrounding personnel. They would never talk about it or treat it like one, but that would effectively make next season a Sixers punt year, save for a damn near miraculous post-deadline run and instantaneous success with whoever they acquired in a deal.

And look, if Philadelphia wants to embrace the problem-solving with Simmons as a piece of this core rather than trade him for value beneath their asking price, that's a perfectly reasonable choice, perhaps even the correct one. It's just hard to do that if everyone knows you're waiting on the right opportunity to move on, and it will seep into how everyone thinks and feels, especially Simmons, who would be in a damn-near impossible situation to manage.

Whatever they do, they need to pick a direction. No man's land is not where you build a title-winner.