Sixers select Serbian big man Filip Petrusev at No. 50, Charles Bassey at No. 53 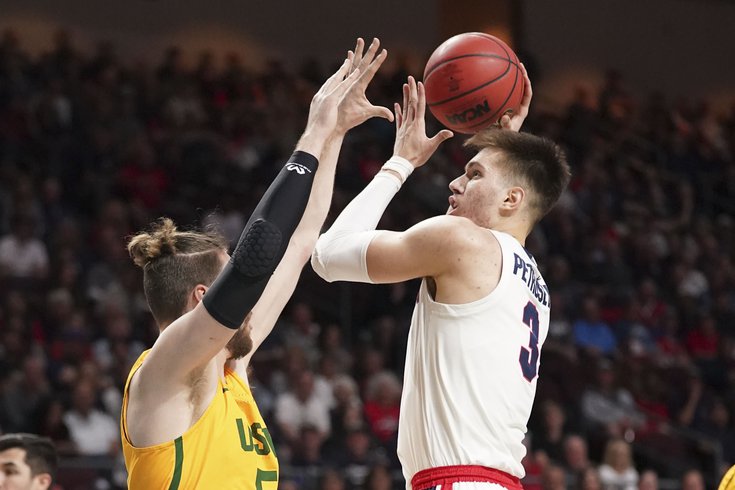 The Sixers took former Gonzaga Bulldogs forward and Adriatic League MVP Filip Petrusev of Serbia in the second round.

The Sixers selected Serbian big man Filip Petrusev with the 50th pick in the 2021 NBA Draft, taking a flier on an interesting prospect who took an unorthodox journey to the pros. Philadelphia followed that up by adding another big man at No. 53, Western Kentucky big man Charles Bassey.

If you're a diehard fan of West Coast Conference basketball, you're likely familiar with Petrusev, who played two years for Gonzaga (2018-19 and 2019-20) and transformed from a low-minute player to an ultra-productive member of a 31-2 Gonzaga team. In his last year with Gonzaga, Petrusev put up 17.5 points, 7.9 rebounds, and made 56.2 percent of his shots, with most of those looks coming around the rim. A return in 2020-21 might have helped the Bulldogs get over the top and win the national title that they lost to the Baylor Bears this March, but with COVID hanging over the NCAA season, Petrusev made the choice to leave Gonzaga and take his talents back overseas.

"There's a lot of uncertainty with the NCAA season," Petrusev said last summer. "Here I should be able to showcase some skills I wasn't able to at Gonzaga and improve my draft stock."

Petrusev suited up for a familiar friend: KK Mega Basket, a Serbian team in the Adriatic League that once employed Sixers first-round pick Timothe Luwawu-Cabarrot. All the 21-year-old did there was win MVP of the league, averaging 23.6 points and 7.6 rebounds while expanding his range out to the three-point line, a potentially significant development as he makes the transition to the NBA. He was an excellent finisher around the basket, and if you combine that with legitimate three-point shooting, he could open up the floor and serve as a combination pick-and-roll/pick-and-pop partner for Philadelphia's bench guards.

(On the other hand, there are major defensive concerns. Scouts say Petrusev isn't especially long, doesn't move well laterally, and will struggle to hold up while switched onto perimeter players. Those are all major issues at a position where defense is king.)

Compared to a lot of European imports, though, the Sixers might not have a lot of time before he gets here. Petrusev may want to get to the NBA sooner than later, which defeats some of the purpose of getting an international guy late in the second round. A source told PhillyVoice they expect Petrusev to be a stash, which is good news in the immediate term, even if it's only a year out.

On the other side of the coin is Charles Bassey, a center out of Western Kentucky who spent his formative years in Nigeria, beginning as a soccer player and eventually making the switch to basketball (growing to 6'11" will do that). After making the move to the States for high school ball, Bassey would eventually go on to have a productive three-year career at Western Kentucky, with his second season cut short by injury.

There are some skills and traits that should translate pretty easily to the next level. Bassey runs the floor hard, is a good lob target with excellent finishing ability, and you can expect him to bury some guys under the rim on poster dunks. He's also pretty huge — Bassey has a standing reach of nine-and-a-half feet, and the same athletic tools that make him a strong lob target aid him around the basket. Bassey will suck guys toward him coming off of screens, which will be useful for the young ballhandlers he would expect to play with on the second unit. His second-jump ability is excellent, and Bassey's timing allows him to block a ton of shots in the paint, with Bassey blocking over three shots per game last season.

Unlike a lot of ex-soccer players you see playing center, Bassey has some issues with his footwork (though weirdly enough, they're a strength in some ways on offense). Scouts question his ability to defend in space at the next level, and though the Sixers have gone away from it some under Doc Rivers and Dan Burke, Bassey is largely viewed as a guy who is best-suited to play drop coverage in the NBA. He's also not much of a shooter, isn't going to give you anything as a passer or ballhandler, and has to be a better decision-maker on offense overall. Bassey turned the ball over too frequently in college, and that'll get him pulled quickly if he gets any sort of chance with the big club.

The upshot here: neither of these guys is likely to play a backup role for Philly right away, with time needed either overseas or with the G-League crew to get up to speed and iron out the kinks in their games. That's to be expected with late second-round picks, but it means Philly has some big-man shopping to do this summer.