Sixers-Heat comes down to a simple dichotomy — make shots, or lose 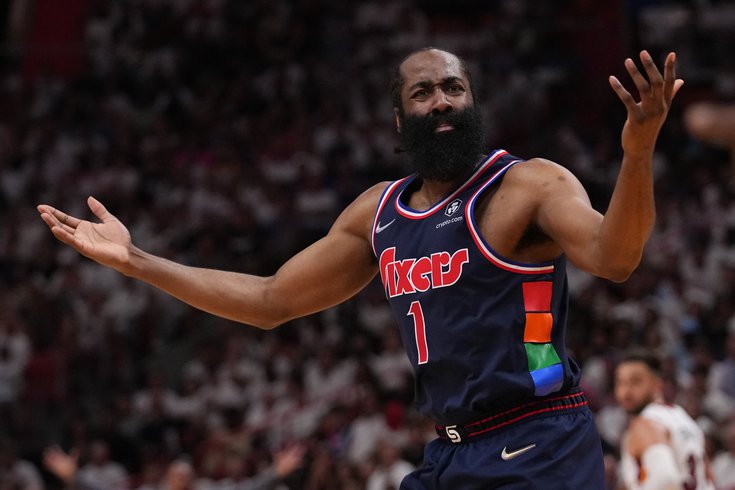 James Harden wasn't;t too effective against Miami triple teams in Game's 1 and 2.

The Sixers going down 2-0 to the Miami Heat is going to lead a lot of people to think that the sky is falling in Philadelphia. I genuinely don't think it's as bad as it seems — so much of the deficit to this point comes down to the Sixers simply not making the open looks that are there to capitalize on.

James Harden is an easy target to blame for the predicament Philly finds itself in. His reputation in the playoffs combined with two consecutive quiet second halves creates an easy opportunity to place the responsibility all on his shoulders. But that feels divorced from what is actually happening on the floor. The Heat are throwing multiple players at a time at him to stop him from getting penetration, leaving Harden with few choices except to hit stepback threes or spray passes all over the floor.

"They're doing a good job of just putting two on the ball and trying to deny me basically the entire court," Harden added. "So it was giving our guys more space to be aggressive if they're going to deny me wherever I am on the floor. When I got opportunities to attack and be aggressive, and that floor has opened up a little bit, then I can go. Give them credit, but I feel like if we made a little bit [more] shots, and I keep saying that, but it opens the floor up a little bit more. You got to respect our shooters, now our gaps is a little bit more open."

No play sums up the problem quite like this sequence from the first half, where no less than three players committed to running at James Harden as he initiated the offense from up top.

Just to drive the point home, this is what Miami's defense looks like after Harden gets the ball into Niang's hands on the right wing, with Philadelphia's backup forward ready to let it go.

If a team can successfully get stops playing this style of defense, you are cooked. There is simply no way to overcome a team being able to triple-team your perimeter initiator without paying for it. And two games into the series, the Sixers are failing to make Miami pay when they go this route. They're failing to make Miami pay in basically any defensive alignment, for that matter. The Sixers are a combined 14-for-64 from three across the first two games of the series, a horrifying 21.9 percent from deep with a lot of guys on the roster who can't do much on offense except make threes.

It isn't satisfying for a lot of people to say that the Sixers would have a chance to win this series if they simply shot better. And to be clear, there's no path to victory if Joel Embiid doesn't play. Miami is too good for this group to win without their anchor. But they are not drawing dead.

"We have plenty of opportunities, I think we played a pretty solid game. We gave them a couple of big offensive rebounds, other than that, I think we did a pretty good job of just getting off to a really good start, and then taking their punches, being the aggressor, I think we did a really good job of that. Things just didn't go our way as much as we needed it to. But for the most part, we're still a confident group and we're gonna go home and do what we're supposed to do."

There were, in spite of their issues, improvements made between Game 1 and 2 on and off the floor. DeAndre Jordan started, but he played considerably less than Paul Reed, who managed to stay out of foul trouble. The Sixers minimized their turnovers, winning that battle 14-8 in the second meeting. They lost the offensive rebounding battle and were hurt badly by second-chance points, but there were fewer second-chance opportunities for the Heat overall, Philly cutting down Miami's offensive rebound count from 15 to 8. In other words, this was not a team that looked at their Game 1 performance as good enough to get it done, and they proved capable of improvement.

You can see the missing franchise player in how the Sixers have attacked (or not attacked) in certain actions. Bam Adebayo was basically on auto-switch in 1-5 actions with DeAndre Jordan in the game, sending Max Strus off of Tyrese Maxey to go hang out on a non-threat. It was a road to nowhere for Maxey in the first half, the Heat able to force him into a lot of junk shots from midrange. And tossing the ball into Jordan (or Reed) works in an obvious lob situation, but not if the big settles into the dunker spot.

"We want the switch, and then we're trying to set the second pick," Rivers said postgame. "The whole key is the guy with the ball has to come off with pace."

There was plenty of pace in the second half, the second-year guard rolling to 34 points on 12-for-22 shooting by spending a lot less time trying to attack Adebayo. Again, this should be viewed as encouraging — Maxey had been having trouble finding his place in the series up to that point, and if they have found a way to get him rolling in the halfcourt, that looms large in the games back in Philly.

"I was settling way too much the last two games. They're switching, and I was backing up and just getting downhill and make a play for my teammates, make a play for one of my teammates," Maxey said. "I kind of figure that out late second, and kind of just ran with it."

"That was a great game for him, and I think he needed that as well," Tobias Harris added. "We just got to figure out more ways to fuel off those type of nights from a guy like that."

How to pull that off as a group is what's debatable. Calls for creativity or flexibility from Rivers are fair, but the limitations of the group have to be acknowledged. Philadelphia's version of small ball is wildly untested and frankly uninspiring — lineups with Niang at center were way underwater this season, 15.6 points worse than the opponent across 185 possessions and a variety of lineup combos. Most were without Harden, and they may not have a lot of great options now, but you are really hoping for something to come together on the fly if this is where your faith is being placed.

The roster is what it is. They don't have big, switchable players who can hang on both ends. Truthfully, it's basically just Tobias Harris who fits the bill, and most people would have argued against that point on defense as recently as a month or two ago. Thybulle can't shoot. Niang can't defend. Korkmaz can't defend. Paul Millsap's legs are totally shot. The multiple non-shooter lineups can't happen, regardless of Rivers' explanation for why they're happening, but going the other direction and playing small is betting on shooting variance in a series where they haven't been able to hit water from a boat.

At best, Philadelphia is going to get a compromised version of Embiid back for Game 3, the big man still dealing with a messed up shooting hand and an orbital bone fracture that will require a mask to play with. And the Heat will undoubtedly swarm him with pressure, testing his vision, preparation, and ability to hit the open man after a layoff at the worst time possible. "Throw it to the big fella and let him figure it out" is a viable plan when Embiid is operating at full capacity.

That means the rest of the guys, ranging from Harden down to Korkmaz, have to pick up the slack. And for most of them, it means doing the simplest (but often hardest) thing to do on a basketball court — make some damn shots, and make Miami pay for doubling on ball.

I wish it was more complicated than that.