Unable to replace Joel Embiid, Sixers will try to make it work by committee 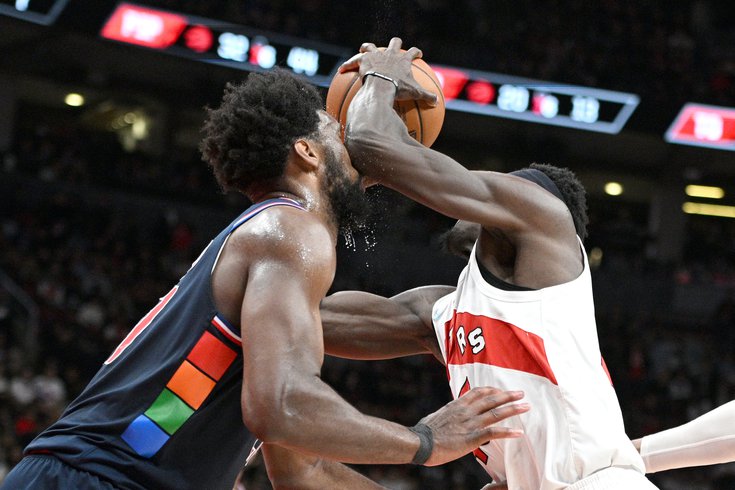 Joel Embiid receiving an elbow to the face from Pascal Siakam.

When a team's most important player goes down with an injury in the playoffs, it's only natural to wonder who will replace that guy and how. You can't have a "next man up mentality" without the existence of the next man to step into a role. So Joel Embiid's absence begs the question: who steps into his spot in a second-round battle with Miami?

The answer Philadelphia is offering, at least publicly, is that nobody is able to fill those shoes by themselves.

"We are not going to be shy with playing different guys," Doc Rivers said Saturday. "I know you guys want to make a big deal about those first three minutes and whoever is announced in the starting lineup, it doesn't matter to us. I'm just telling you that right now....we're worried about the last six minutes. That's going to be the key for us in this series."

"We may need all four guys, even if it's to burn minutes. The one thing Miami is, if they're nothing else they're clever. They're foul magnets. That's a concern for us. Two reasons, they shoot free throws well, so we don't want to play the whole series in the penalty. And No. 2, getting some of our guys in foul trouble. Bam [Adebayo] does a great job of that, Jimmy Butler may be the best at it in the series now without Joel, and Kyle Lowry does it. We just have to be very smart in how we plan our bigs."

If you noticed, Rivers did say four options at center, because the Sixers got one small piece of good news on the health front. Charles Bassey was able to go through a full practice with the team on Saturday, and he was spotted going through a low-minute group scrimmage at the facility after practice wrapped, the rookie big continuing his progress after dealing with a shoulder strain.

They may end up needing him. It's too early to tell whether Embiid can make it back in this series or not, even after news came down Friday evening that surgery on the orbital fracture is not necessary at this time. The first step for Embiid is clearing the league's concussion protocol, and there is an initial waiting period for the orbital injury too. Until swelling and pain subside, it'll be tough to make any sort of firm declaration on his potential availability.

Keep your expectations in check — an optimist's view might find Embiid back on the floor for the second half of this series, assuming a second half exists at all. But saying definitively that he will be out there rests on too many variables, starting with a doctor's clearance and the Sixers actually still being alive in the series, to say nothing of Embiid's comfort level playing with multiple injuries.

That leaves the rest of this group to get it done without him. And while they are certainly bummed out about losing him, they have not allowed themselves to feel bad or lose hope, focusing instead on the task at hand.

"Tough news to take, but we just as a group want him to get healthy and better, and whenever that is, we'll be ready," Tobias Harris said. "But at the end of the day, for us it's a next man up mentality and just being locked in the game plan. That's what we came in here today to get done. We just got to figure it out. This has been a resilient group all year, so nothing has changed in that regard. We'll prepare the same way and we'll wait for big fella to get whatever he needs to get to where he needs to be."

"I think right now we have a good feel for what works for us, both offensive and defensive end. Whomever fills that role, it's really going to come down to just energy and effort, really propelling us forward. Whoever it is, just continuing to bring that fire to the group and to be aggressive as well. We'll definitely play a little bit of a different style because we're going to be missing those types of post-ups and whatnot, but that just means there's going to be probably added pick-and-roll play for us as a group."

Attention will shift immediately to the play and leadership of James Harden, a guy who has thrived as the alpha dog before but who has looked less equipped for that responsibility over the last year. In their decisive Game 6 victory over Toronto, Harden responded to calls for aggression with perhaps his best effort of the series, leading from the front as a scorer in the first half to set up Philadelphia's onslaught in the final 24 minutes of the first round.

Sustaining that over a full game is, as Harden would probably tell you himself, a different beast. And without Embiid on the floor to draw attention and force mismatches, it will be on Harden to direct traffic, beat favorable matchups, and pick up the scoring load, sharing that last part with the likes of Tyrese Maxey and Tobias Harris.

"It's just us figuring out what we can go to through the course of a game in the playoffs," Harris added. "It's always adapting and figuring out how the other team is playing, what they're taking away, what they're allowing, and for us to capitalize on it. So all three of us are always ready to be aggressive and want to be aggressive, and it's on us to figure out ways that we can capitalize for the whole group out there. That may be Danny Green getting extra shots over the course of a game, and getting those types of looks. We have to be okay with that, and we as a group are prepared for that. Everybody just needs to be ready, focused and locked in."

Insofar as Rivers tipped his hand at all — and he said a lot of positive things about all his options during a long session with the media — they may have stumbled onto a setup that works for them in the final game of the series. Rivers adjusted the team's substitution patterns to get Embiid out of the game earlier than usual, bringing Reed into the game with most of their starters still on the floor.

Reed, despite showing his youth at times in the series, played well enough in the role that he doesn't sound like a candidate to get benched.

"I thought Paul was terrific. I thought the adjustment in Game 6 for Paul helped him, because we're trying to figure out the best way to help him," Rivers said. "Our first thought was play him with the starters more, because the minutes where he's with the other guys, there's a lot of mistakes made. [Game 6], we took Joel out early and that way he played with four starters. I thought that helped him, and so we intend on doing that a lot."

The goal over the next week, outside of winning some games, is as simple as buying time for their best player. The Sixers will probably end up being slightly underestimated in this series, as Rivers and his staff have done a good job of giving the team chances to win games when they've been without the big man this year. They're aware there will be much less of a letdown effect in a playoff series than you'd deal with in a midseason game, but with spacing and a collective approach to the job in front of them, the Sixers can at least keep this competitive in the interim.

Will that require Reed, Bassey, DeAndre Jordan, or Paul Millsap? I wouldn't bet against seeing all of those guys at some point before the series ends, nor would I discount the possibility of Philly playing small, even if Rivers cautioned against it a bit on Saturday. If you could just plug one guy into the spot and let it rip, Embiid wouldn't have been in discussion for MVP. All they can do now is take it one day and one step at a time, using whoever and whatever to try to level the playing field.

"We need him back at some point, but we don't know when and we got to hold the fort," Rivers said. "This is why we pay everybody, and this team has a great belief system. We've had a lot of stuff thrown at us this year with guys out, maybe this is another test in that. We're going nowhere, I can tell you that, this team will be ready when we get to Miami."