Allen Iverson confronts Stephen A. Smith on the Process: 'I told you' 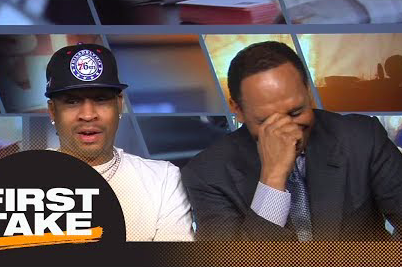 During the leanest years of the Sixers' multi-year tanking project, popularly sanitized as the Process, one of the team's harshest critics was ESPN analyst and former Philadelphia beat writer Stephen A. Smith.

"I don’t want to hear a damn thing about it. As a matter of fact, I’m [going to] start cursing people out that ask me about it."

Well, the Sixers are a win away from advancing to the Eastern Conference Semifinals on Tuesday night, anchored by two talented young stars who would not have been here without all of that losing, plain and simple.

Sam Hinkie may be gone, but the fundamental strategy — gutting a middling team to recharge the roster over a few years — seems to be paying dividends. No supporter of the Process would claim all the losing was pleasant, only that it was necessary. Along the way, there have also been baffling decisions, bad draft picks and hiccups caused by injury. There's no denying that this was a matter of serious and worthy debate on all sides.

But as bad as it was winning 10 games, there are two things to keep in mind about the Process: you could either have become a casual fan, kept your money and done other things with your life, or you could have enjoyed watching Brett Brown prioritize the recreation of a team identity in Philadelphia. Roster survivors like Robert Covington and T.J. McConnell make this year's playoff squad that much sweeter. Attracting a talent like JJ Redick became possible because of the organization's upside. Next year looks potentially even better.

On Tuesday's edition of "First Take," Smith brought on old friend Allen Iverson, who's been a consistent presence with the team throughout the Process and now with the success of late.

Iverson said he can definitely see the Sixers making a championship run, mainly because they have the talent and they believe in themselves. It's certainly not an easy path, but they're capable.

The more interesting part of the interview comes toward the end, when Smith asks Iverson to share his thoughts on the Process.

"I feel good about it because I feel like, unlike you, people like myself and the rest of the fans in Philadelphia, you know, they believed in it," Iverson said.

"You know what I mean? We Trust the Process, and obviously, it's looking good."