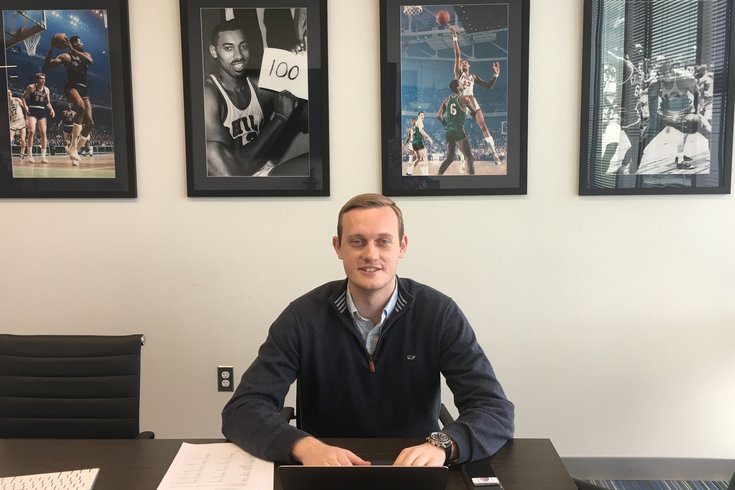 Monday is Opening Day, arguably the biggest day on baseball's calendar, when the vast majority of MLB teams are still trying to convince themselves this is their year. But it's also a big day for the Sixers, or at least it is for one arm of the organization – one you likely didn't even know existed in the first place.

One of the recent additions to their new complex in Camden is the Sixers Innovation Lab Crafted by Kimball, and on Monday, the first company accepted to their incubator, Monster Roster, a daily fantasy service to help optimize your lineup, launched a baseball service to coincide with Opening Day.

The top one percent of daily fantasy players win 90 percent of the money... So that's what Monster Roster does, we give you a chance to compete with the pros.

Founded by 20-year-old San Francisco native Dylan Elder in 2015 (when he was still in high school), Monster Roster uses Elder's custom algorithm, which analyzes stats and trends in real-time, to help users pick the best roster on any given day.

And before you ask, it works. According to Monster Roster, their users win 40 percent more often on daily fantasy sites such as DraftKings and FanDuel.

"The top one percent of daily fantasy players win 90 percent of the money," Elder told PhillyVoice during a recent interview. "So if you can find some kind of edge – and Monster Roster is that edge – to help you stop being a fish and take some money from the sharks, you should absolutely try to do that. So that's what Monster Roster does, we give you a chance to compete with the pros."

While Elder's age may be eye-popping, he's actually been at this whole fantasy sports thing for a decade. Or to put it another way, he's been doing this half of his life.

"It really started back when I was 10 years old, and playing fantasy for the first time," said Elder. "I loved sports my whole life, but I started typing up these fantasy football guides over the summer before football season. And my dad owns an advertising agency so I would trade those fantasy guides in – bad grammar, poorly-written, all that stuff – for free video games in his office."

"Those guides kind of took off in high school, when I got my own fantasy blog. Again, my parents and friends were probably the only ones to read them, but I loved doing it and it was really good experience for me. Toward the end of high school, I teamed up with a buddy of mine to create an algorithm to predict fantasy points for players in given situations."

The idea for that algorithm, he said, came during his AP Stat class in junior year. That's when he began trying to figure out ways to marry what he was learning in school (advanced statistics) with what he was doing at home (watching sports and playing fantasy).

This was also right around the time daily fantasy sports were becoming mainstream. And in the beginning, Elder was trying to pick his team's based on his gut feeling. He was also consistently losing money.

That's when he and a friend, now a stat major at Northwestern, decided to take what they were learning in class, and apply it to fantasy sports.

The algorithm, which took months and months to figure out, will never be complete. It can continually be tweaked as new trends emerge and more statistics become available. It will continue to improve over time, and not just because of any potential changes made by Elder.

"One of the really interesting things about it is that it gets better over time because it learns as it collects more data," said Elder, recalling many long nights sorting through hundreds of Excel spreadsheets on his computer. "As the season gets longer, it gets more information to apply to individual players in different situations."

Monster Roster started with football advice, but before that, it was nothing more than Elder promoting his winnings on social media. Eventually, he started charging his followers money in order to obtain the daily lineups created by his algorithm.

Last year, they expanded to the NBA. And on Monday, it's time for baseball.

Because of that growth and the time commitment it requires, Elder put his studies at Georgetown on hold after just one year so that he could join the Sixers. That's a big decision for a then-19-year-old kid living thousands of miles from home, but he says his parents, both entrepreneurs themselves, were more than supportive.

And it certainly didn't hurt that Elder – for the record, he intends to return to Georgetown and get his degree – had the backing of an NBA organization and a newly-founded incubator, which, in a way, is giving him a different type of education, one that in many ways is more practical than what he would learn in a classroom.

The Sixers' Innovation Lab is managed by former AND1 Founder and CEO Seth Berger. Think of him as the Erlich Bachman to Elder's Richard Hendricks.

And he's been a huge help to Elder, especially in the branding and market side of things. For example, it was Berger and the Sixers in-house marketing team who helped come up with the name Monster Roster – originally (and ironically), it was called And1 Analytics.

Now, that name, and the service they provide, is available to a whole new segment of daily fantasy players. In a season that's 100 games longer than the next closest sport. That seems like a smart move.

With that being said, here's a look at Elder's top five daily fantasy picks for Opening Day – yes, some of the games have already started, but it's an example of the kind of advice you'll be getting from Monster Roster. There are no Phillies on the list, but Elder did like the idea of playing Tommy Joseph against Reds starter Scott Feldman. He also likes a potential Cameron Rupp vs. Brandon Finnegan matchup later in the series.

Toronto 2nd Baseman D. Travis is Monster Rosters’ favorite value play for Opening Day 2017. Not only is he criminally underpriced, especially on FanDuel, but he’s a reverse splits hitter facing off against a reverse splits pitcher, K. Gausman.

M. Sano has a fantastic opportunity to go deep for a low price on Opening Day. Sano’s power numbers vs. lefties are 43 percent better than the average player, and opposing pitcher D. Duffy gives up 5.4x more home runs to right-handed batters compared to lefties. Monster Roster has found Sano is clearly underpriced for this matchup.

Opposing San Diego pitcher J. Chacin gives up 77 percent more home runs to lefties compared to righties, and Los Angeles has a plethora of left-handed sluggers in their lineup. League average FIP was 3.95 in 2016, and Chacin has a 4.86 FIP vs. lefty batters. J. Pederson, C. Seager, and A. Gonzalez are the three best targets in the Los Angeles’ lineup on opening day.

B. Dozier has hit left-handed pitching well for his entire career, and a matchup with D. Duffy should be more of the same. Duffy is 2.7x worse vs. righties than he is vs. left-handed batters, so expect Dozier to be able to create several run scoring opportunities from the top of the lineup.

New York provides one of the better stack possibilities on opening day for a variety of reasons. The team’s lefty-heavy lineup gets to face J. Teheran, Atlanta’s ace who had a down 2016 season. Teheran allows 84 percent more home runs to left-handed batters compared to righties, and 12 percent more home runs on the road than at home overall. J. Bruce had an average 2016 season overall, but his numbers vs. righties show he’s still an elite offensive talent.