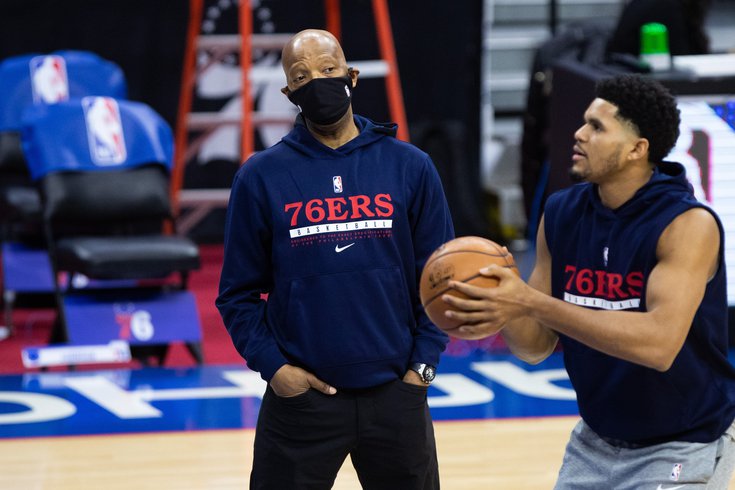 Sixers assistant coach Sam Cassell is expected to interview for the open head coaching position with the Utah Jazz, according to a new report from Shams Charania and Tony Jones at The Athletic.

A longtime Doc Rivers lieutenant, Cassell began his transition to coaching before his long and productive playing career had ended. During his final NBA season in 2008-09, Cassell was a member of the Boston Celtics' active roster, but never appeared in a game, serving as a de facto assistant coach to Doc Rivers in the season following their 2008 championship. By late May 2009, he was already on the bench as a coach for real, joining his former head coach in Minnesota, Flip Saunders, on the staff for the Washington Wizards.

It was in Washington where Cassell first developed a reputation as an important mentor for guards, earning praise for his work with Wizards point guard John Wall — including from Wall himself, who says Cassell helped him with his jump shot and approach to the game. That has carried over to Philadelphia, where Cassell has been an important mentor for young Sixers guard Tyrese Maxey, who blossomed during his second season in 2021-22.

“I appreciate Sam because think about that, in my opinion, Sam is a Hall of Fame point guard," Maxey said last November. “To have someone like that in your ear helping you and coaching you every step of the way, the only thing it can do is be grateful and it’s gonna help you. It’s not gonna harm you at all because, at the end of the day, he just wants what’s best for us, best for our team, best for me.”

This isn't the first time Cassell has gotten a look for a head coaching gig, and if he fails to get the nod this time around, it likely won't be the last. Cassell was in the mix for Washington's vacant head coaching position last year before Wes Unseld Jr. was ultimately hired, and he has the exact sort of resume teams tend to look for when hiring a coach. He played a leadership role throughout his playing career (stylistically and vocally), has a wealth of experience on an NBA bench, and frequently earns positive reviews from players, a more important trait than ever with how power has shifted toward the players in professional sports. There are still unknowns with Cassell, namely how he'd set up a team in a position of authority, but there's a reason many fans have pined for him to get a coaching look.

On that front, there has been a lot of consternation about Philadelphia's last two head coaches, and the negative sentiment has only gotten worse as Sixers assistants have gone on to have success leading other programs. Three separate Sixers assistants left jobs on Philadelphia's bench in recent years and made a Conference Finals appearance within two seasons of taking over their new teams: Mike D'Antoni (Houston, 2018), Monty Williams (Phoenix, 2021), and Ime Udoka (Boston, 2022). In the case of the latter two men, each made a run all the way to the NBA Finals, combining for more Finals appearances than the Sixers have as a franchise this century.

(An additional note — one of Williams' top assistants in Phoenix is former Sixers assistant Kevin Young, who Utah reportedly requested permission to interview after Quin Snyder officially made the decision to step down.)

Philadelphia's ability to consistently hire assistants who get a look for head coaching jobs speaks to the attractiveness of a job here and the investments to load up the bench with talent. If these coaches continue to move on and have more success than they did with the Sixers, though, there will be plenty of questions about whether they need to pay a little closer attention to their own bench.