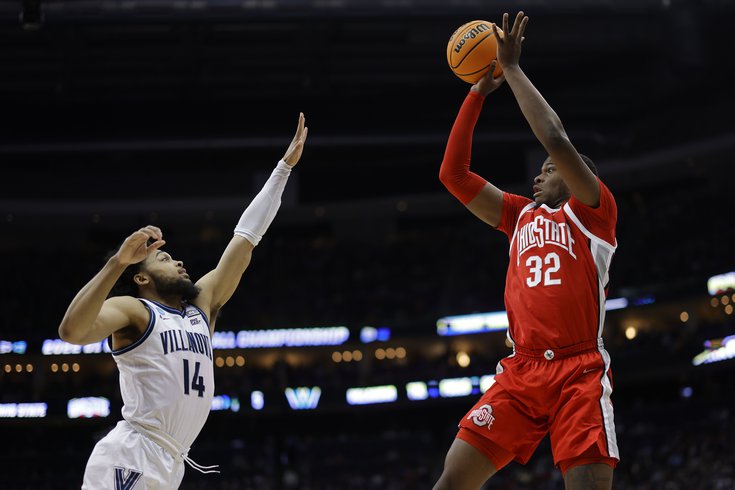 Now that the Sixers officially own their first-round pick in the 2022 NBA Draft, we can finally start taking a look at this year's class and think about who might be a fit (and available) at their spot. Draft fever has been subdued as the Sixers have moved further from the "Process" years, but their picks now are as important as ever, providing them with chances to improve their young talent and fill in the gaps on their roster.

For today's exercise, we're going to do a quick run-through of some guys who look like they might be available around their pick based on reliable mocks. It's anybody's guess how the board will shake out — there are plenty of guys every year who the public likes more than NBA teams do — but each of these guys either fills some sort of need, interviewed with the Sixers or presents a unique upside case. In some examples, they check all those boxes.

(Before we start this, I just want to leave a note that I absolutely adore LSU's Tari Eason, who will likely be gone by the time the Sixers select at No. 23. In what I can gather from the small amount of time I've spent watching him and following the guidance of people who scout much more than I do, he's basically souped-up Paul Reed. If he shoots well enough to stay on the floor, he's going to have the ability to wreck teams on defense. The only reason I wanted to mention him is that he seems like a true wild card, an ultra-productive player whose style of play might push him down the board.)

Brown may be the best athlete in the entire draft, plays hard, defends well and finishes at a high level at the basket. That sounds like the sort of guy you want on your team, at least if you had confidence he was going to be able to hit threes at the next level.

The bad news: Brown was below average from deep in his only year at Baylor and shot less than 70 percent from the charity stripe on a paltry 2.2 trips to the line per game. He is also not much of a self-creator, and in the immediate term, that makes him a tricky player to introduce into the Sixers' ecosystem. You can get around being an iffy shooter with fluidity off the bounce, and vice versa, but it's hard to get to respectability without one or the other. It's why Brown finds himself in an uncertain territory as a prospect, being mocked as late as the early second round by a lot of experts after floating around the lottery heading into the season.

On Philadelphia's end, there's still logic to betting on a guy like Brown, who has prototypical tools on the wing. With James Harden expected to handle a lot of the creation duties for the Sixers from the perimeter, a player with good cutting instincts (and excellent finishing ability) like Brown has could easily pile up a few easy baskets per game by learning Harden's tempo and cadence. His shot quality will go up from all over the floor with the burden of creation taken off of his shoulders, allowing Brown to focus his development specifically on something like corner-three shooting, where we've seen players make themselves careers and lots of money next to playmakers like Harden.

The simplification of his role on offense will allow Brown to really buy and lock in on defense, where he has the potential to be a switchable defender from 1-4 who can play in just about any lineup. The Sixers are in desperate need of players who can add size and athleticism to help them compete with the elite teams in the Eastern Conference, and Brown has no shortage of either.

Beauchamp has one of the most fascinating paths to the draft of any prospect in the class. He opted against becoming a scholarship player to train with Chameleon BX in San Francisco after his senior year of high school, a plan that was disrupted by the COVID-19 pandemic. Returning to his home state of Washington to play for the local community college team, Beauchamp lit up the (admittedly inferior) competition and eventually found his way to the G-League Ignite this past season, impressing alongside a group of more highly-touted prospects.

"Another prospect with a questionable shot?" I can hear some of you saying. Yes, but Beauchamp is a slightly different prospect than Kendall Brown. Beauchamp has a bit more fluidity than Brown as a pull-up shooter, a bit more wiggle off the dribble, and if a team can bring him along on either front, they might get a higher upside player on offense while getting an attractive player on the defensive end. The G-League product has height, wingspan and strength to body up on guys in isolation, which he did plenty of in the G-League against older competition last season.

Beauchamp is the first guy on this list who met with the Sixers at the draft combine, so take that for what it's worth.

Liddell is the type of forward who checks the boxes Joel Embiid mentioned during his end-of-year presser. He's undersized (6'7") for a guy who split time between the 4/5 spots in college, but he's a strong, physical presence who has improved on his areas of weakness across three years at Ohio State, and could give the Sixers a pathway to moving back toward "bully ball" lineups at some point in the future. If you want the next PJ Tucker, you could simply draft a guy who is built similarly to PJ Tucker.

Whatever Liddell lacks in size he often makes up for with touch and timing at both ends of the floor. He was an excellent shot-blocker at the college level, and while that doesn't necessarily mean you can run him out as a small-ball center in the pros, it does give you different options when Embiid hits the bench (or when Embiid is still on the floor, for that matter). Of the players we're touching on here, Liddell is probably the best player right this second — he was one of the most productive players in college basketball last season, averaging 19-8-2.5 with 2.6 blocks per game, and his step forward as a three-point shooter was a big development last season. If Liddell can be a consistent catch-and-shoot guy, his dirty work traits and productivity around the basket can shine through.

Looking at some of the teams they're competing with in the East for years to come, Boston's Grant Williams is a recent prospect who lends hope for the Liddell types of the world. Boston has figured out ways to use him as a bruising, semi-traditional forward next to bigs like Al Horford and Robert Williams, and he has the strength and defensive know-how to hold up as the five situationally.

Look, even Sixers fans would have to admit that drafting a guy who has nearly the same name as Embiid's center rival would be pretty hysterical. But this is far from a meme pick — selecting Jovic would be a bet on a 6'10" guy with a well-rounded skill set on offense, a home-run swing that also allows you (or a team you trade him to) to stash him as he continues to grow overseas.

The comp a lot of scouts have made for Jovic is Danillo Gallinari, which you can see almost right away when you see what he can do scoring the basketball. Jovic is tall enough to shoot over guys in the mid-post (though skinny enough that it will take time to do that in the league), crafty enough with the ball to beat closeouts and get to the rim and a threat to hurt you on pull-ups and catch-and-shoot looks.

Like most teenagers, he could stand to put some more meat on his bones, but he's a fluid athlete at his size who should be able to capitalize on NBA floor spacing, not to mention create some of it himself. It's far from a sure bet that he'll be able to consistently beat guys one-on-one jumping from the Adriatic League to the NBA, but he will presumably have time to polish up his game and better prepare for that leap in the next year or two.

A lot of the concerns Jovic faces come down to his inexperience and how that manifests on the floor. Scouts see wild swings back and forth within a game, Jovic capable of high-level playmaking and frustratingly dumb turnovers alike. In some cases, risk-taking can be seen as a positive in playmaking prospects, a sign that they are seeing and trying to get passes through windows that other players cannot or will not. Within a Sixers context, play finishing will be more important, and Jovic feels like a player who might be able to help them as a floor spacer, timely cutter and secondary creator as he develops.

There are big defensive question marks with Jovic, and as Sixers fans have learned the hard way over the years, it's very hard to hide weak links in the playoffs. A player with his offensive upside wouldn't potentially be available at No. 23 if it was all sunshine and rainbows. But he would represent a big swing on talent, one who could open up some different lineup combos and provide extra juice next to Embiid in bench lineups down the road.

McGowens is another player the Sixers met with at the Draft Combine, and a player you'd be betting on because of his on-ball upside rather than his current production. The shot mechanics look clean and his free-throw percentage was encouraging, but he didn't see too many of his attempts go down at Nebraska. Do the Sixers need a player in a creator mold like McGowens, or more of a play-finisher who slides into a role alongside their established stars? There's a pretty credible argument for the latter.

That said, any guy who can take opposing players off the bounce at 6'7" is going to warrant serious consideration in the first round even when they have other warts. If you're of the mindset that a team should be trying to swing for the fences with a pick in the 20s, hoping to find upside rather than simply getting "a guy," you could do worse than McGowens, who has three-level scorer upside and has already shown flashes of it before turning 20 years old.

Broadly speaking, Daryl Morey's approach to team building is driven by stars and star-level talent. The odds of getting a consistent, productive player in the 20s are not great regardless of how big your swing is, and McGowens has at the least shown tangible creation skills at the amateur level. It may not fit their exact needs of the moment, but bringing a creator with size off the bench isn't going to hurt.