Instant observations: Sixers blow out Bulls despite absence of stars 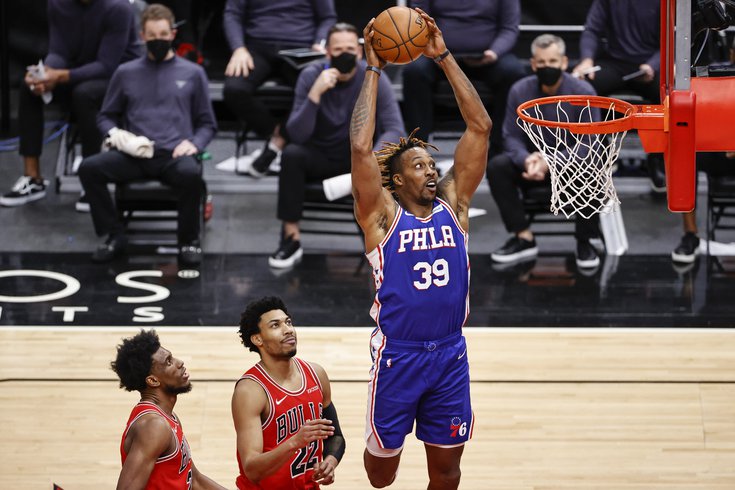 Philadelphia 76ers center Dwight Howard goes up for a dunk against the Chicago Bulls.

The Sixers came out of the All-Star break with all guns blazing, torching the Bulls, 127-105, without the services of Joel Embiid and Ben Simmons. Nothing like a complete team win to kick off the second half of the year.

• This Bulls team is not exactly a juggernaut, but the biggest question heading into and coming out of every All-Star break is whether your team has their mind on something outside of the painted lines. With Ben Simmons and Joel Embiid missing, anything less than a great team effort would have turned this one ugly in a hurry.

It was a pleasant surprise to get one of the best, most spirited efforts of the season from the supporting cast that remained. Pinpointing one guy would be silly because contributions came from everywhere, but it was excellent to see them band together like this. It's one thing to say you have a championship mentality this season, and it's another to maintain that when the talent level drops off considerably in the first game after a layoff.

• Matisse Thybulle deserves a healthy share of the credit for the Sixers' positive start to the game. He has had brilliant stretches of individual defense this season and his opening stanza on Thursday evening is up there with any one of them. Thybulle came up with four steals in the first five minutes against Chicago, creating a turnover problem for their opponent all by himself.

Rewards were not always there for his effort — Thybulle had one deflection pop up into his own basket midway through the third quarter — but that takes nothing away from the chaos he created and the doubt he planted in the minds of Chicago. There was a lot of second-guessing for the Bulls throughout the game, and Thybulle certainly had a hand in that, causing guys to look over their shoulders and hesitate just a little too long.

Offense feels like a bonus for Thybulle whenever it's there, and he had a terrific night on that end as well, getting hot from three in the second half to help bust open the game and push the Sixers closer to a win. Say this about the young man — he doesn't lack confidence from deep, and the Sixers would be over the moon if he can shoot at an even average level the rest of the way.

• Tony Bradley is not a very explosive athlete and can't recover when he makes a mistake on a defensive play, but his best asset on both ends is his positional sense, which minimizes how often he actually has to recover for an error. He is constantly in the right place at the right time, and with a rare opportunity to start, Bradley showed out, carrying a perfect mark from the field into halftime and continuing the show afterward.

He didn't get there by just depositing a bunch of easy dunks. Bradley went toe-to-toe with Chicago's bigs (mainly Wendell Carter Jr.) on the block and showed off some excellent touch, nailing a few pretty hook shots around the painted area. Bradley was the beneficiary of his own hard work on the other possessions, with his work on the offensive glass earning him some extra touches.

I could very easily argue his defense was more important on a night without their two best defensive players, but Thybulle was so good that he gets second billing there. In any case, Bradley had one very noteworthy admirer watching from afar:

Embiid was excited for good reason. The games are going to come fast and furious with this schedule, and it has to feel good for Philly to have a third playable big if they need to go to him down the stretch.

• On the other side of the backup big coin, Dwight Howard continued a strong recent stretch as if there was no break in the action, absolutely dominating the Bulls on the boards at times. But more importantly, this game featured some of the best Howard play in pick-and-rolls that we've probably seen all season, and it came in a variety of different pairings.

Howard's hands have been somewhat of an issue at times this season, with passes and lobs bouncing off of his fingertips and into the hands of opponents for runouts the other way. The opposite happened against Chicago, with Howard saving some otherwise rough passes and keeping possessions alive.

The biggest surprise of the night was the combination play between Howard and Furkan Korkmaz, who threaded some absolutely beautiful feeds through traffic to set up Howard around the rim. Once the Bulls started to play the pass, Korkmaz used the hesitation to get to the rim and score. There aren't many games where Korkmaz should have to handle the ball quite this much, but it was nice to see.

• This is a game that Tobias Harris would have let snowball into a disaster earlier in his Sixers tenure. He opened the game 0/5 from the field despite mostly clean looks and looked well on his way to a brutal night.

Instead of letting that define his evening, Harris did what most players are told to do when they can't get anything to drop: go to the basket. A hellacious dunk attempt that he barely missed drew free throws midway through the first, and then Harris got there again around a minute later, easing himself into the game from the stripe. From there, it was off to the races, with Harris going deep into his bag once he saw a couple of freebies go down.

The Sixers could not afford a passive Harris in a game without Embiid and Simmons, and they didn't get one.

• Seth Curry's shooting numbers were pretty woeful but I think the Sixers should be thrilled to see him hunting his shot as aggressively as he did against Chicago. He's the best shooter on the team and should be the exact guy who attempts crazy heat checks in transition and pull-up threes on the regular. You live with the results every time when a guy is that good from beyond the arc.

• Easy to forget you're missing your two best players when you get seven different players into double figures. Heck of a team effort.

• Nothing mean or bad to say about this game on Philadephia's end. I would consider this one of the best wins of the year even when you consider the strength of the opponent. Picking up your stars with an effort like this in their absence is absolutely massive and the sort of thing they need if they want the top seed in the East.

This game shows me more about championship mentality and habits than the vast majority of games they've played this season.

• The collision between Mike Scott and Garret Temple in the first half looked brutal and probably felt worse. Was glad to see both guys get up unscathed.