Short film 'Why Not Us' is inspired by the Eastern Conference's 21-point comeback that earned A.I an MVP trophy 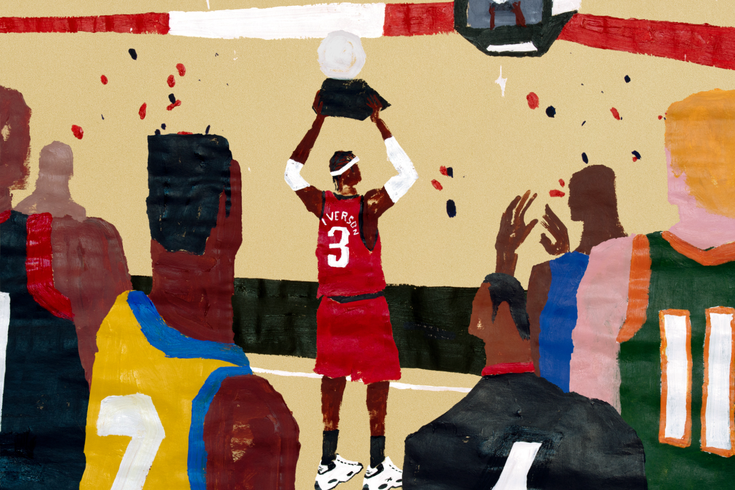 Reebok's 'Why Not Us' campaign features an animated film narrated by Allen Iverson, who reflects on the 2001 NBA All-Star Game and the 21-point comeback he and his Eastern Conference teammates led.

Twenty years have passed since the Philadelphia 76ers' magical 2001 season, led by Allen Iverson at the peak of his basketball powers.

Sometimes lost in the NBA Finals appearance and Iverson's league MVP honors that year is the dazzling comeback performance A.I. led in the 2001 NBA All-Star Game.

The game was played in Washington, D.C., way back when Kevin Garnett was on the Timberwolves and the former Seattle Supersonics were in their maroon jersey phase. Iverson, of course, played his college ball at Georgetown and grew up in the region, so he was right at home.

On Thursday, Reebok released an animated advertising campaign narrated by Iverson, who references the Eastern Conference's 21-point comeback to win the game.

Down 95-74 with nine minutes left to play, Iverson and his teammates, including Stephon Marbury and Tracy McGrady, clawed back for a 111-110 victory. Iverson took home the All-Star MVP trophy, finishing with 25 points, five assists and four steals.

The ad, animated by artist Kellen Hatanaka, also features voices from Benny's Club, a queer and BIPOC surf club based in New York City and Rockaway Beach. The campaign is for Reebok’s Question Mid ‘Why Not Us’ sneaker worn by Iverson in a black-toe model during the 2001 All-Star Game. The sneaker will be available on Reebok's website and at select local retailers beginning March 19.

Back to the 2001 All-Star Game — you can watch the full game on YouTube, or check out some highlights in the video below. (Your mind might be blown by the memory of Denver Nuggets-era Antonio McDyess).

Compared to last weekend's sloppy new-format All-Star Game, which was missing Sixers Joel Embiid and Ben Simmons due to COVID-19 contact tracing, the 2001 East-West battle was All-Star competition at its peak. And for Sixers fans, it's another reminder of Iverson's greatness that year.