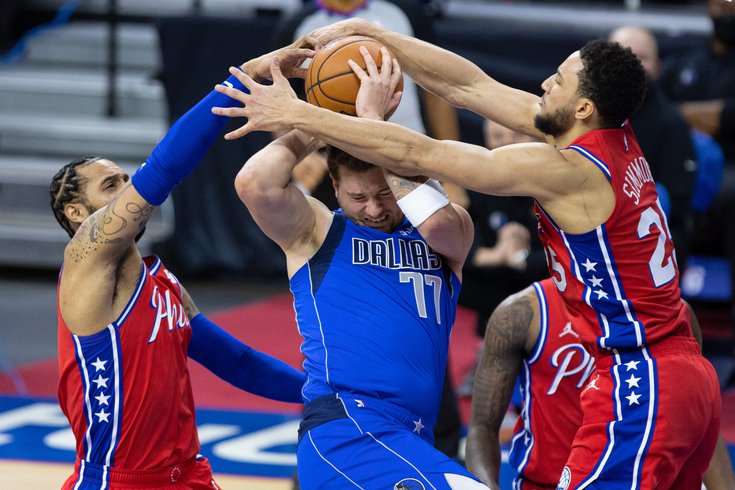 The Sixers shot 43 percent from the field, their best player was 5/20, and the leader of their second unit missed nine of his 13 attempts on the evening, all signs you'd expect to point in a losing direction on a given night in the NBA. Think again — the Sixers outclassed the Mavericks easily enough on Thursday night that Joel Embiid and Ben Simmons got to spend the fourth quarter posted up on the sideline, watching the bench close out a win they'd earned with their defense.

A national TV date with Luka Doncic should have resulted in some serious fireworks. Earlier this week, Doncic hit a dagger three to kill off the Boston Celtics at the buzzer, and his passing gift has allowed him to control games even when his shots don't fall. Outside of a hot shooting stretch in the third, he was downright pedestrian against Philadelphia, his anonymous 19 points a credit to the Sixers' core duo.

"Ben set the tone, Joel was phenomenal. Seth Curry got his hands — you know we told him he should have known their plays, he did," Doc Rivers said after the game. "I just thought our defensive energy...We didn't have a great offensive night. And yet, we're up by 20 most of the game and Dallas is a great offensive team. For us to play defense like that was special."

Simmons, as he has been in so many games this year, was the man taking the lead and directing Doncic where he needed to go. Rivers has waited until halftime to unleash Simmons on a lot of top assignments this season, but he wasted no time throwing the kitchen sink at Doncic in this one.

Every spot Doncic wanted to get to, Simmons beat him there. And unlike his colleague Matisse Thybulle, whose jittery swipes at the basketball left him in foul trouble all night, Simmons did not concede the advantage created by his fundamentals, trusting that the wins he created early were enough to carry the day. More often than not, he was correct.

Simmons doing this to elite opposing players on a regular basis doesn't make each successive effort any less impressive. The night-to-night consistency he offers as a stopper and chess piece is hard to match leaguewide, a fact that is not lost on teammate Dwight Howard, who has three Defensive Player of the Year awards of his own that add weight to his words.

"It's been amazing. He's picking up guards, he's playing bigs, he's playing one through five," Howard said following the game. "A couple of games ago, he was playing against Rudy Gobert. Now he's playing against Luka. He's taking up the idea that, 'I can play anybody, I can check anybody on defense.' I believe he's the best defensive player in the league right now. He's done an amazing job."

"I'm just glad that he is really kind of realizing how great he is, the greatness that he has in his life. I just want to continue to pour [that] into his life, continue to speak greatness on him. He's an amazing player, I love watching him play defense. His energy, his effort has been top of the line. I just want him to continue to do that and stay humble and hungry because the sky's the limit for Ben. And like I said at the beginning of the season, LeBron James, he has that, he has everything. I'm real proud to see his growth for the beginning of the season until now. He's an All-Star, and he's going to continue to play great and lead this team."

It's hard to present a better sales pitch than that. He is drawing comparisons to all sorts of disruptive perimeter forces from years past. During a postgame session with the Inside the NBA crew, Kenny Smith offered up the name Ron Artest, another former Defensive Player of the Year who is remembered for being one of the league's toughest and wildest players, to put it lightly.

The two could probably not be further apart on the personality spectrum, but if there's a trait they share, it is their dead-eyed approach to defense. Simmons' fears and hang-ups on offense melt away on the other end of the floor, and he is happy to tell you as much after he has shown you over the 48 minutes you've already watched.

"Just being me, doing what I do," Simmons said Thursday evening. "I like taking those challenges. I've said this over and over again, just tell me who to guard."

But there is another component (or more accurately, another person) who provides the base that makes all of this possible. Embiid is the pillar behind him, the guy who can clean it all up if Simmons takes a step in the wrong direction. This season, we see more than that from Embiid in pick-and-rolls, where he works in tandem with Simmons rather than dropping toward the basket as the failsafe.

Bringing Embiid up further in pick-and-rolls has had occasionally disastrous results for the Sixers, understandable given the newness of the style for their defensive anchor. But more often than not, the Sixers have used his size to successfully contain and direct traffic where they need to go. It has been especially noticeable over the last month or so, with Embiid light on his feet and finding the middle ground between dissuading the shooter and still covering his man on the roll. When you give him a matchup like the ground-bound Boban Marjanovic, it's an even simpler task for him:

Comparing the success of lineups that feature one without the other, the drop is more dramatic for Simmons-led lineups that are missing Embiid than Embiid-led lineups that are missing Simmons. Even as Simmons rightfully earns the headlines and accolades for his defensive wizardry, it is important to be mindful of the guy who has propped up almost every lineup he has ever played in dating back to when he was flanked by the likes of Sergio Rodriguez. They are the shutdown corner and pocket collapsing lineman of the Sixers, two pieces that would thrive anywhere who benefit from having an elite player in a different role alongside them.

The scarier proposition for Philly is if they can get the rest of their teammates to fall in line behind them, a process that has come in fits and starts throughout the year. There have been breakthroughs for several average to below-average defenders under Rivers and assistant coach Dan Burke, most notably in third banana Tobias Harris and sixth man Shake Milton. Neither has turned into a lockdown defender, but each plays and understands their role enough to serve the team well.

That's critical even when Embiid and Simmons are involved defending a primary action. Weakside help is going to be necessary many times over in the average NBA game, and mistiming or misreading when to send it can lead to a wide-open look in a dangerous spot. Against Dallas, we saw players like Milton nail every defensive tenet — head up, engaged with the play, aware of his responsibility, and decisive in action, resulting in turnovers like this one from Dwight Powell:

He's got a point. And if the Sixers can hit this level with any regularity, they're going to be scary come playoff time.