Everybody likes awards and shiny things. Five Star Review is our way of catering to that urge, spotlighting key sequences and performances, in-game oddities, puzzling quotes, and everything in between from each Sixers game. This space offers a chance to reflect further on observations from the night before using video, quotes, and good old-fashioned logic.

Today's game: a clunker of a performance vs. the Orlando Magic.

Internally, the Sixers will likely wave away this loss as a typical late March swoon against a team with much more to play for. There is a bit of that, sure, but the Sixers would be foolish to ignore how far they are from having a championship-level defense.

Their struggle to stop guards of all calibers has never really faded into the background even as the Sixers have added more and more high-end talent. The Sixers are certainly more capable of creating problems for their opponent with the starting lineup they throw out there these days. But if they can't stop the Orlando Magic, owners of the seventh-worst offense in the league, they have real problems.

At 11th in the league in defensive efficiency, you might look at their league rank and convince yourself they're not that far from being in the league's top tier. How's this for perspective — the Sixers are almost exactly as close to the league's top defense (Milwaukee, 104.4 points allowed per 100 possessions) as they are to Washington's 27th-ranked defense (112.7 points allowed/100). Joel Embiid's presence alone should be enough to make them better than that.

A lot of factors add up into one crappy whole here. They don't force many turnovers, and combined with their own turnover problem, that typically allows their opponent to put up more shots than they do. Cue Michael Scott: 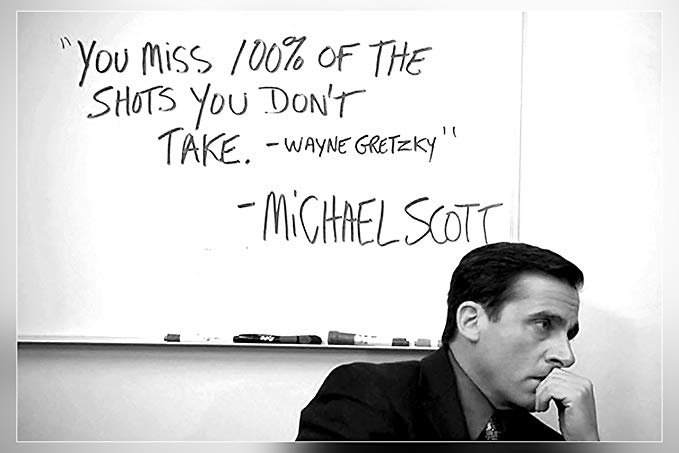 Jimmy Butler is a better overall player than Robert Covington, no doubt, but even if we gloss over their actual defensive abilities, the latter's ownership of the team's defensive identity may have been undervalued from a "spirit" perspective. Even Embiid, who is typically one of the team's hardest competitors, has shown selective effort on the defensive end more this year. Ben Simmons' peak is great, and he wasn't available on Monday anyway, but he's notorious for floating. There are not enough guys who just buy in and come out flying every night.

There's the scheme, which is driven by playoff concern but isn't producing elite results. A lot of fans have taken issue with the Sixers switching as much as they do on screens, and I don't agree that's the end-all, be-all of problems. Switching is a feature of many of the league's best units, and many around the league are curious if Milwaukee bucking this trend will bite them in the playoffs.

Even within that structure, though, there's room for smaller debates. Should the big show harder on pick-and-rolls instead of dropping? Nikola Vucevic was able to step comfortably into jumpers because of Philadelphia's drop coverage on Monday. We might see some adjustments in a playoff series, but the results are what they are: middling. That should inspire some philosophical debate internally.

Of course, at the end of the day a lot of struggles come down to newness. When guys like Shake Milton are being thrown into the fire late in the year with new continuity to speak of with their teammates, you get results like these:

this is... not going to cut it pic.twitter.com/ZxtAsRsLCf

However you decide to distribute blame, it hasn't been good enough. The coaching staff and the players need to figure out a season-long problem in a few weeks. That's not ideal.

Boban Marjanovic is going to get turned into mincemeat by any good team the Sixers go up against. Brown has said many times he wants to give him a real chance to prove he can stay on the floor in the playoffs. I think we have seen quite clearly why no coach has ever been able to make him more than a bit player.

The issue here is simple. Everyone makes mistakes on defense, from the league's best defenders to the guys who could charitably be referred to as revolving doors. But when Boban makes a mistake or commits to action with the correct purpose, he has exactly zero chance to recover if the opponent reacts to his decision with pace.

These two plays happened within minutes of each other in the second quarter, with Boban putting guys on the free-throw line because he simply doesn't have the foot speed to recover:

What I think should scare Philadelphia the most about this is that the league tends to go even smaller and quicker in the playoffs compared to the regular season. The Bucks, for example, probably don't want to play Giannis Antetokounmpo too much as a small-ball center before games start to matter. In the playoffs, however, that would be a natural counter to any Boban minutes and would leave Philadelphia stretched.

Center is not a position where defensive limitations can be hidden. The sad part is, every option that isn't Boban is probably bad, too. Small-ball lineups with Simmons or Mike Scott (NBA edition) have not performed all that well, Jonah Bolden's defensive reads are not playoff-caliber, and Amir Johnson is cooked.

The Sixers need a reliable option behind Embiid. They've invested quite a bit in searching for that option, and they're still looking for one that works.

Getting beat for offensive rebounds

Michael Carter-Williams played with a lot more desperation than anyone on the Sixers. That should come as no surprise because of where he is in his NBA life cycle, but the Sixers are not at a point where they should constantly be at a hunger deficit. All too often, that's what it looks like.

In recent years, we've seen a lot of excusing away for poor effort from great players or teams. LeBron James is the perfect example of this — he went to eight straight NBA Finals, a monumental feat, so his regular-season defense dropping off a cliff got glossed over because there was strategic value saving his legs for the "real" season.

I don't think I'm breaking any news when I say none of these guys have accomplished anything close to what LeBron has in his career, and they all have a ton to learn about what it actually takes to be part of a championship-caliber roster. That starts with demanding more of themselves day-to-day by just playing harder and actually maximizing the value of their talent.

Perhaps a team formed midseason never had a real chance to compete for top seeding in the conference this year. But as good as it sounds for the Sixers to win 50+ games and be the likely No. 3 seed in the East again, in a playoff future where everything goes as expected, that provides them with homecourt in exactly one series.

Who's to blame for this one? Brown garnered praise for his bad teams playing hard in the rebuilding years, so you certainly can't absolve him here either. They should all be demanding more from each other now, because results later don't come without hard work now.

Shake Milton showing off the arsenal

I'm 75 percent serious when I say Jimmy Butler is the only other guard on the roster who is capable of scoring in all three of these ways:

Milton has dominated in the G-League and has shown promise during limited run as a two-way player this season. The defensive issues are what they are, and I can't imagine the Sixers will sign him to a real contract before the end of the year, which will leave him ineligible for the playoffs.

That said, I think they have something in Milton, and despite some ugly plus-minus numbers against Orlando, I think over time they would benefit from having another guard who can actually do guard things on offense, whether that's Milton or someone acquired this summer.

The Zhaire Smith highlight reel from his opening game consists of only one shot, a three that he knocked down confidently. That is, to say the least, not exactly a given for recent Sixers draft picks:

But let's focus on the big picture here. Smith making it back at all this season is a great story after all he went through, and sometimes the human aspect is a lot more important than the basketball results.

Smith put in an extraordinary amount of work to get back on the court this season. Two-a-days at the practice facility, work with the G-League crew, film study with assistant coaches, more protein shakes consumed than any one person should probably drink in their lifetime. He did whatever it took to get back in fighting shape, and he finally got to see that pay off last night.

For a kid who supposedly had to gain back 40 pounds, that three meant a lot more than just points on a scoreboard. Step one of living out his dream was completed. From here, we'll all see whether he's capable of becoming a factor for a loaded team moving forward.