Backdoor politicking and secret payments have always been assumed as part of the game when it comes to top NCAA recruits.

But an FBI investigation into the corruption of one particular sports agency has put the amateur system under a brighter spotlight than ever, and a current Sixers player has now been swept into the madness.

In the part pertinent to Sixers fans, one of the names in the report is none other than Markelle Fultz, the No. 1 overall pick who has been out of action since late October. Documents obtained by Yahoo detail what appears to be a $10,000 loan to Fultz, in addition to a cavalcade of other young players. 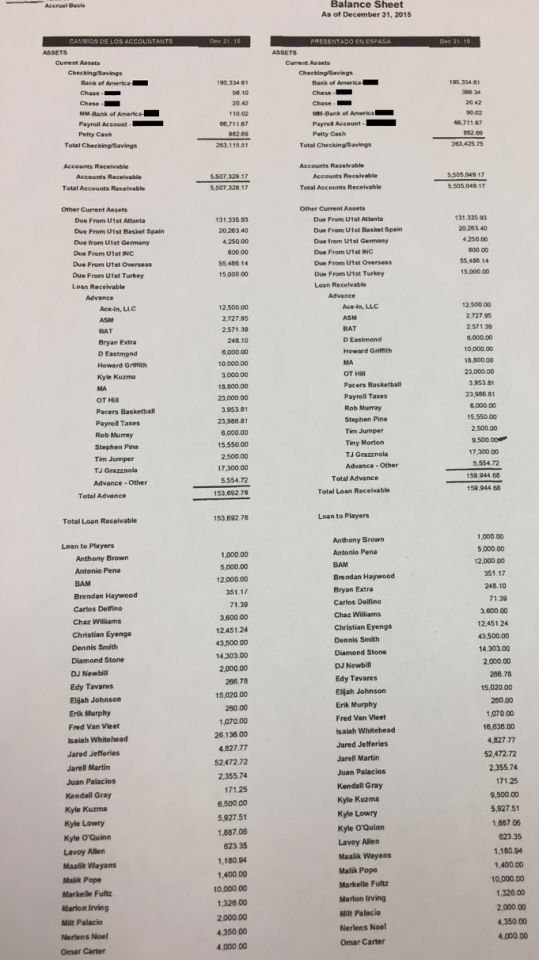 A document that purportedly shows payments made by agency ASM Sports to amateur basketball players.

The list of visible names should paint a clear picture of just how far back this scandal goes. Carlos Delfino, a 35-year-old guard who was drafted all the way back in 2003, and Philly native Kyle Lowry, a 12-year veteran, are also listed on the loan sheet, in addition to former Sixers like Maalik Wayans, LaVoy Allen, and former lottery pick Nerlens Noel.

But Fultz is obviously the most notable name attached to the Sixers at this very moment. PhillyVoice asked for comment or clarification from members of the Sixers organization and people close to Markelle Fultz on Friday afternoon, but none could be reached for comment at the time of publishing.

Fultz is only a story here insofar as he is part of a broader landscape of NCAA hypocrisy. Seeing the dollar figures bubble to the surface on Friday inspired all sorts of old and tired debates about whether amateur athletes should be paid by the universities they represent, in addition to plenty of shaming from people who feel this reflects poorly on Fultz's character.

RELATED: What has really been going on with Markelle Fultz?

In this writer's opinion, it is a huge problem that universities refuse to pay players for their labor while simultaneously profiting off their likenesses and production on the court or field. But the bigger problem is how the NCAA actively prohibits players from profiting on their own likeness outside the boundaries of the university, which is ridiculous and downright un-American.

If universities don't want to be bothered trying to determine who gets paid how much and when, fine, even if it's a crappy stance. You can't also sit there and prohibit players from doing the exact same thing you do, which is turning their athletic achievements into ad revenue. Bowl games are multi-million dollar sponsorship exercises presented by your favorite soda of choice, while the NCAA Tournament is a yearly exercise in how many penis pill commercials can be fit in between TV timeouts. But god forbid a lottery pick sells an autographed jersey for a few hundred dollars because it might bring this whole thing to a crashing halt.

It would be naive to think this problem doesn't extend past one agency or past agents in general. Boosters and shoe companies are just as dirty in the recruiting game, and it's not hard to figure out why that is. Splashing thousands of dollars at kids desperate for any money they can get is a no-brainer in a multi-billion dollar industry, and the presence of just a few exceptional athletes on campus can lead to an unimaginable boost in brand prestige and future earnings.

If there's any justice in the world, this scandal will lead to a change in how athletes and the NCAA do business. There probably won't be, and there will be a lot of useless probes and punishments that do nothing to change the problem, but here's hoping.

Frankly, Fultz's mistake was not taking money from an agency — which he didn't end up signing with anyway — but that he didn't take more money from these crooks.