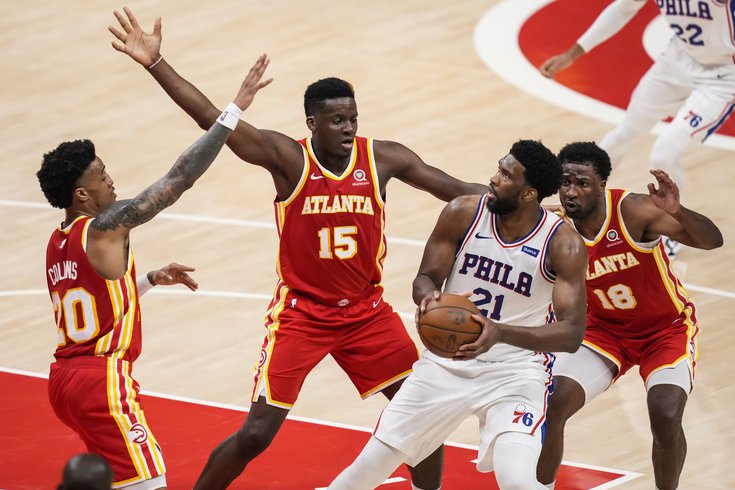 With a win in Monday night's Game 4, the Sixers will take a commanding 3-1 lead over the Hawks as their Eastern Conference semifinal series shifts back to Philly after taking both games in Atlanta. But, if the Hawks can pull off the upset — especially with Philly adjusting to the sudden absence of starting forward Danny Green — and this series will be tied at 2-2 and essentially be starting over Wednesday night at the Wells Fargo Center.

In other words, a lot hinges on the outcome of Game 4.

With the other Eastern Conference series suddenly tied at two games a piece after Kyrie Irving joined James Harden on the Nets' injury list, it's looking more and more like New Jersey and Milwaukee could go the distance. And the Sixers could take advantage by ending things with Atlanta as soon as possible, allowing not only Green to heal before the team is pressed back into action, but perhaps more importantly to get MVP runner-up (and the only of the three finalists to still be alive in the postseason) Joel Embiid some extra rest for his partially torn meniscus.

Currently, despite missing one of their starters, Philly is a three-point favorite across the board at Pickswise, which is saying something when you consider not only that the Hawks backs are against the wall, knowing that a loss means their season could end Wednesday night, but also that they haven't lost back-to-back home games since Nate McMillan took over on March 1. In fact, they had only lost two home games total in that span before Friday night's loss to the Sixers.

Embiid, Ben Simmons, Tobias Harris and the rest of the Sixers will be hungry to send a message in Game 4, as Doc Rivers team can smell blood in the water — and they'll likely continue to do it as they have for much of the series so far, with their suffocating defense putting Trae Young on ice.

The question now is, will they?

As we do for every Sixers playoff game, we'll have you covered with live updates, analysis, highlights and more as these two teams face off on Monday night at 7:30 p.m. on TNT. Follow along right here...