Four years after he first raised her over his head to celebrate a win, owner Dennis Grove is saying goodbye. 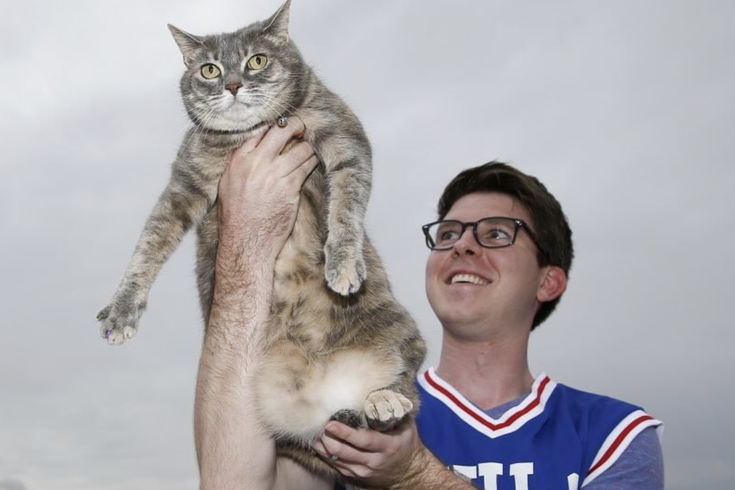 Sixers fan Dennis Grover hoists Izzy, the poster cat for the #RaiseTheCat trend that caught fire in Philadelphia in 2017 as the Sixers began their gradual rise to NBA title contention. Izzy, 14, is battling cancer and will watch her final game as Philly hosts the Atlanta Hawks in Game 5 of their Eastern Conference Semifinals playoff series.

The Philadelphia 76ers have come a long, long way since the 2016-17 season — a 28-54 campaign that marked a turning point in the franchise. Joel Embiid emerged as a young star that year and Ben Simmons — out for the season with a foot injury — was waiting in the wings to catapult the team to NBA relevance.

The Sixers have made the playoffs each of the last four seasons and are currently the top seed in the Eastern Conference, locked in an intense series with the Atlanta Hawks that will continue Wednesday night for Game 5 at the Wells Fargo Center.

It will be the last Sixers game for Izzy the tabby cat, the internet sensation behind Philadelphia's #RaiseTheCat craze in 2017.

Some sad news - on Thursday we will say goodbye to our beloved cat Izzy of #RaiseTheCat fame (cancer sucks). All we hope for is she can see one more win tonight in game 5 from the @sixers. #WinOneForIzzy pic.twitter.com/x9o4ec0ggP

Dennis Grove, the Sixers fan who first lifted Izzy into the air following a rare Sixers victory that year, announced on Twitter that he and his wife, Valerie, will have to put Izzy down on Thursday after a battle with osteosarcoma. She's 14 years old and has lived a long and fulfilling life, but the couple does not want to her to suffer through the progressing stages of her cancer.

Just for a refresher, in case anyone needs it, Grove and Izzy kicked off a social media trend that involved Sixers fans raising their cats in the air after victories. The trend has lived on sporadically ever since.

These cat photos tagging the Sixers with #RaiseTheCat were at their peak during the early months of 2017, when the Sixers ripped off a string of wins and showed life for the first time in the Process era. The NBA commemorated the improbable stretch with a montage of highlights from several of those games.

In the midst of the winning streak, even rookie Joel Embiid and other players bought into the hype.

At the time, Grove marveled at how far and fast Izzy's moment spread.

"Mark Zumoff said it on the air. ESPN did a whole expose on it. It was on Snapchat News. It was on Bleacher Report," Grove told PhillyVoice. "This would not have happened if the Sixers continued to lose, but for some reason, they kept winning. It was a perfect storm. In order to have a trend like that, you kind of have to have some luck."

Grove initially was inspired to lift Izzy in the air after seeing one particular photo Ben Simmons had posted on social media showing off his two young Savannah cats, which are an exotic cross between servals and domestic cats. (Ironically, Simmons later admitted that buying the two cats was a huge, $10,000 mistake and a crazy lesson learned about responsible pet ownership).

The more the 76ers win, the more fans lift up their cats in victory#RaiseTheCat https://t.co/ZIa7faJRus pic.twitter.com/yQNbjHy22c

The Simmons photos, however, were only a piece of Grove's inspiration.

"He maybe helped me think about #RaiseTheCat and start it, because I was like, 'Hey Ben, I'm going to try to do the same thing with my cat,'" Grove said. "But I feel like as it went on, it wasn't really a reflection of Ben. It was more the Sixers community and myself who really ran with it. I wasn't thinking as much about Ben as trying to promote adopting pets — and just trying to have some positivity when they win."

The #RaiseTheCat frenzy snowballed into T-shirts Grove had printed to benefit local animal shelters including Philly PAWS and Morris Animal Refuge. The shirts raised about $4,600 and united fans around the message of not just raising cats literally, but raising them and caring for them as pets. The NBA Store tried to cash in on the trend, but ultimately pulled its own knockoff T-shirt amid jockeying over a possible trademark competition.

Grove said he learned a lot from the experience — not all good, at the time — but he chooses to focus on what #RaiseTheCat said about Sixers fans and the city of Philadelphia.

"What I learned is that our fanbase will do anything. We love good luck charms. We hate bad luck charms. We're superstitious," Grove said. "It feels like we're very reactionary, right? When we lose, we think the world is ending. When we win, this is the greatest day of our lives. It was very easy to understand why this became such a huge deal, because we live game to game as Sixers fans and Philadelphians. Tying a regular season win in January to someone raising a cat above their head just felt appropriate. That's how crazy we are and that's how sports here work."

As the Sixers continue their playoff push in 2021, Grove said he and his wife are remembering Izzy's improbable story. Originally a rural outdoor cat, Grove met Izzy in 2009 when Valerie took her in from her sister. She was Grove's first pet, and he knows saying goodbye to her on Thursday will be emotional. She's been a stable presence in their lives and made a smooth transition to indoor life in Philly.

"She's a very simple cat and that's what we like about her," Grove said. "She does have some fun sometimes. On the roof deck, she'll get a little crazy. I think she's just a very valuable member of the household. We always rely on her being there and greeting us when we walk in the door."

On Wednesday night, Grove will cherish his final game with Izzy.

"She'll be around. I definitely want to make sure she's comfortable and not bothered too much," Grove said. "If they win, it'll be an emotional moment because that's how I'll remember Izzy the most. She'll leave a legacy, for sure."