Sixers hold workout with Ben Simmons, who they reportedly have told will be the No. 1 pick

Our short local nightmare is over.

The Sixers held a private workout with LSU point forward Ben Simmons early Tuesday morning in front of a group that included the coaching staff, members of the front office, and managing owners Josh Harris and David Blitzer. For the Sixers, this provides some closure after all of the rumors and reports that were flying around about Simmons not wanting to play in Philly.

“It was important for us and we were excited to be able to get the opportunity,” Sixers president of basketball operations Bryan Colangelo said. “I think it also kind of speaks to the fact that Ben and his representative wanted to make sure that we were aware they want to be number one pick and would like to be considered here in Philadelphia.”

Despite Colangelo’s description of a two-player race for the top pick (Brandon Ingram is that other player), Simmons seems to be who the Sixers have zeroed in on. Cleveland.com’s Chris Haynes is reporting that the Sixers have told Simmons they will select him first on Thursday night at the NBA Draft.

Colangelo confirmed that the Sixers also received Simmons’ medical records, another sign that the LSU product wants to be selected with the first pick. This was the third individual workout that the Sixers conducted at PCOM (Ingram and Jaylen Brown were the others).

“It was helpful at the end of the day,” Colangelo said of the morning workout. “I think it was most important for us to close the chapter on any doubt that Ben or Rich [Paul, Simmons’ agent] would not want to come here in Philadelphia.”

All smiles after today's workout. pic.twitter.com/nEweWi2RPp

The Sixers met with Simmons and his representation last Thursday in Cleveland. Colangelo came away impressed by Simmons, specifically mentioning how he looked standing next to Joel Embiid.

(Maybe this is reading too far in between the lines, but I think it's worth nothing that Ingram looked super skinny next to the comically large Embiid last week.)

"He's all of 6'10" and 242 pounds," Colangelo said. "So you're talking about a substantial young man that is going to have an impact physically at this level almost immediately. He's  got an NBA body and he's got some skills that are definable NBA skills. And when you put that size and skill together, it's generally a pretty good package.

To add fuel to the fire (and send fans of Sam Hinkie into a frenzy), Simmons put this picture out today on Instagram that has since been deleted. 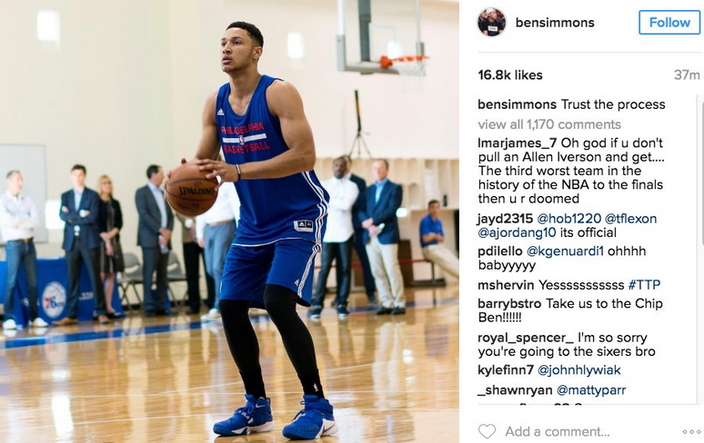 With two days to go until the draft, there doesn't seem to much drama in Philly. All signs point to Simmons shaking Adam Silver's hand Thursday night with a Sixers hat on.