Undermanned Sixers forced to recover quickly in preparation for Bucks 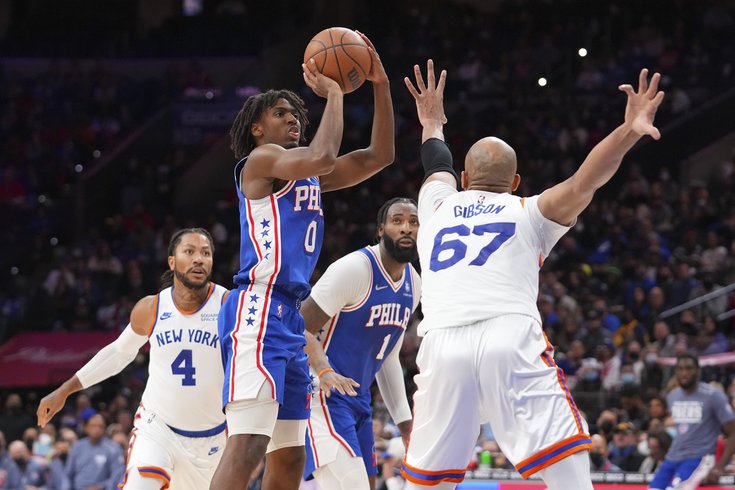 Moments after the Sixers lost Monday night's game against the New York Knicks, Doc Rivers didn't have much time to focus on yet another hard-fought game from his undermanned team. The Sixers, as luck would have it, had another game in their arena 24 hours later, against the reigning champion Milwaukee Bucks, fresh off of their visit to the Oval Office.

Leisure time has been in short supply for the Sixers lately. Using just seven players for most of the loss to New York — "Bball" Paul Reed had a five-minute cameo in the first half to get to eight — Rivers joked that Philadelphia's only hope on Tuesday night was a spirited trip to the White House for the Bucks, who stopped by to see Joe Biden and celebrate this summer's title on Pennsylvania Avenue.

"We have no choice, playing tomorrow night. Hopefully, President Biden gets the Bucks to drink at the White House today as much as he can," Rivers said. "But they're going to be in fresh, think about it, they have a day off and we play them tomorrow."

The Sixers knew this was a tough stretch before it got rolling, which is why they handed Joel Embiid a rest day to start off a run of six games in nine nights. They've handled it almost as well as possible, standing at 4-1 with one more left to go, and even that felt improbable in real time given the state of the roster. What started as a breakthrough COVID-19 case for Tobias Harris has turned into a series of unexpected positive tests for Sixers rotation players, knocking out Matisse Thybulle, Isaiah Joe, and finally Joel Embiid over the last few days, leaving the Sixers searching for answers.

A couple of exceptions aside, the Sixers have been happy with the roster's commitment to getting vaccinated and had begun moving toward getting booster shots for their players when appropriate. Unfortunately, precautions taken weren't enough to prevent this mini-outbreak altogether, and after Rivers noted Harris was suffering from symptoms last week, he relayed the same regarding his franchise player.

"He's not doing great. He's struggling with it, very similar to Tobias. That's all I can tell you," Rivers said Monday.

Next man up has been a rallying cry for this group this season, starting with the continued absence of Ben Simmons, and this is what they prepared for with their offseason moves on some level. Andre Drummond, brought in to give Embiid cover whether he's in the lineup or not, was an absolute force on the glass in their loss to the Knicks, becoming the first Sixers player to pull down 25 rebounds since Charles Barkley last managed the feat in 1987. Convinced to accept his role in Philadelphia by Rivers, Drummond has displayed a level of commitment that has cut against his career reputation, even on nights where his effectiveness has tailed off for one reason or another.

Drummond, the biggest dude on the floor for Philly, is the guy who would ostensibly feel the burden of playing a heavy minutes load the most the next day, especially as he swings between a low-minute role off the bench and a starter-level load that he plays in Embiid's absence. Yet there he was in the second half, hauling ass down the floor to mix it up on the offensive glass and create a second-chance for Philly in a tight game:

If he was cognizant of the fact that he'd probably be playing huge minutes again the next day, he did not show it at that moment or any other time during the game. And Drummond sneered at the idea that playing 40 minutes was an especially taxing workload for him after the game, relaying a very simple plan for getting right ahead of Tuesday's clash with Milwaukee.

"Sleep, sleep as much as we can," Drummond said Monday. "Take care of our bodies, ice, compress our knees. Guys that have played a lot of games know how to take care of their body. I've played a long time, we know what it takes to sustain our bodies for the rest of the year."

At the floor level, "We'll be aight" is a fair enough stance to take. Battling nightly fatigue is a mental battle as much as it is a test of your conditioning, and if a guy like Drummond concedes it before a game ever starts, the team begins to wander down the path toward checking out and getting blown off the floor by a full-strength opponent. Higher up in the organization, though, the Sixers have to remain focused on bigger picture goals, leaning on the coaching staff to serve as their guiding hand on the ground.

Some of that work has been done proactively ahead of Tuesday. Following a brief road trip to the midwest, some Sixers players were told to stay away from the facility on an off day Sunday, which is an easy enough sell for some of the more experienced guys on the roster. Not so for Tyrese Maxey, who has played 138 minutes and 11 seconds over the last three games and is still eager to get more reps in at the facility in Camden. In his case, Maxey was told Sunday was a "dark" day (or "blackout" day) where he was not allowed to come into the gym, with the team aware he'd likely just show up early the next day to make up for any time he felt he'd lost.

Relentless as Maxey's spirit may be, even he has his limits. Down the stretch of Saturday's game against Chicago, Maxey went to assistant coach Sam Cassell and noted his fatigue to the former point guard, to which Cassell joked that he'd better hope for good luck because he'd be playing 40 minutes again the next game. And you're stuck between two minds hearing things like this — the part of your brain that assumes a 21-year-old is basically superhuman, and the part of your brain aware of how fatigue leaves everyone susceptible to bigger and badder problems, if not immediately then certainly down the road. And that idea has Rivers pondering exactly what to do against the Bucks on Tuesday night.

With (for now, anyway) 11 guys presumably available to suit up, Rivers has promised to play at least 10 guys against the Bucks, which will need to include at least two from the deep-bench trio of Jaden Springer, Charles Bassey, and two-way player Aaron Henry. Rivers has shown no inclination to turn to Bassey yet, using small-ball lineups around Georges Niang and a healthy dose of Paul Reed if the Sixers go past Embiid and Drummond, so the logical bets are Springer and Henry, flexible enough players in theory who in practice have a long way to go before they can really contribute. The only realistic expectation is to hope they can simply buy time for a roster of players with maladies of their own — Furkan Korkmaz is still rocking wrist tape after missing a game last week, and who knows what state Danny Green will be in after returning from a hamstring injury to play 30 high-intensity minutes on Monday night.

It's not all bad news for the Sixers. Brook Lopez and Donte DiVincenzo remain out for Milwaukee, and Khris Middleton remains out as a result of his own stint in the health and safety protocols. But a date with Giannis Antetokounmpo and Jrue Holiday is enough to deal with on its own, even if the Sixers had a lineup that was close to whole.

So the Sixers, or what's left of them, will march back onto the floor Tuesday night in an attempt to ignore fatigue, the point spread, and the dread of looking forward, aware that important absences continue to loom over the games ahead. Perhaps they'll follow the lead of their coach, tuning out until they need to lock in at 7:30 on Tuesday.

"I watched the Bucks all day today with the staff, and I'm going to go home and watch Yellowstone," Rivers said Monday. "I missed it last night. That's what I'm going to do, and get some rest."