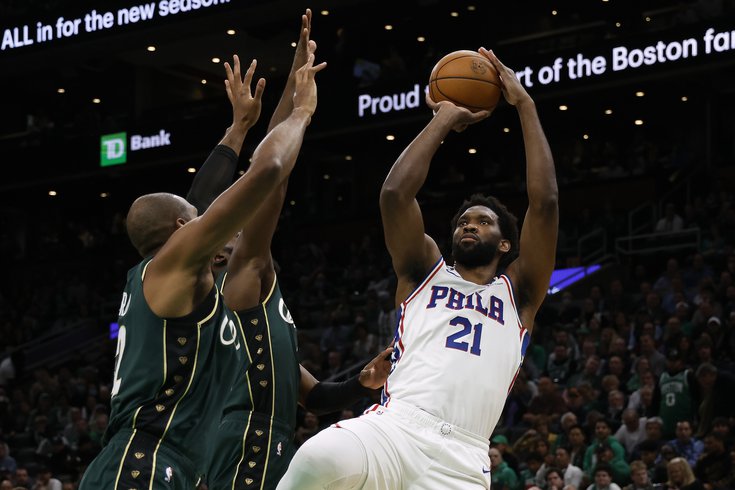 Sixers Joel Embiid attempts a shot against the Celtics.

The injuries never seem to stop for the Sixers, huh? The team's going on 10-plus years of bad luck in the injury department. That obviously extends to the team's franchise superstar and MVP candidate Joel Embiid. Embiid's injury history is lengthy and he's currently dealing with a new ailment: a left midfoot sprain that will sideline him until Friday at the earliest.

What does that specific "midfoot" diagnosis for Embiid entail?

"We break the foot up into the hindfoot, which is the back where the heel is, the midfoot, which is the middle, where that navicular bone and your plantar fasciitis are, and the forefoot, which is up by your toes. It's a third, a third and a third," says Dr. Christopher Selgrath, an orthopedic surgeon at Nazareth Hospital.

"That midfoot is really like your arch, so he did have plantar fasciitis and he's been dealing with that," Selgrath continues. "That's right where this is. He could've tweaked that and that could be the culprit. Remember, that plantar fasciitis gets tight and you need to stretch it out. If you stretch it out too much, like an injury or the foot gets tweaked the wrong way, and too quickly, that causes strain of that midfoot area."

There's more to that part of the foot.

"The other thing that's in that foot is a bunch of metatarsal bones, a bunch of little bones, of which, the navicular is one of them. Those bones are held together with little ligaments," Selgrath says. "He could've sprained one of those ligaments also. It doesn't require surgery, but definitely could cause pain and some swelling and some inflammation."

Embiid is missing the back-to-bet set with the Nets on Tuesday and the Hornets on Wednesday. Selgrath believes shutting him down for that brief stretch is wise.

"It's one of those injuries where I think you could tell they said, 'Hey, we're going to wait two days and see what happens,'" he says.

"48 or 72 hours can make a world of a difference. You want to wait that period and let the dust settle. I think it'll be much clearer picture in 2-3 days."

The views and opinions expressed in this article are those of the author and guest authors and do not reflect any official policy or position of any NBA team or a team's athletic physicians.