If you thought the Sixers could make it through the end of the year without being caught up in another burner account snafu, you were unfortunately wrong. The only good news this time is it wasn't someone running the team sharing industry secrets and player gossip anonymously, but a father of a player sharing problematic views online.

An account that uses the moniker "MuskieBobber" on Twitter, which a team source confirmed was the account in question, belonged to Bob Muscala, the father of new Sixers forward Mike Muscala. The account listed several locations that track with the younger Muscala's career path, and more recently has shared dozens of photos from the team's trip to China.

This account — which was followed by several Atlanta Hawks media members at time of posting, and was recently tagged after Bob Muscala recorded a podcast with local Sixers bloggers — was one of at least two accounts operated by Muscala, the other being a slightly eccentric, if ultimately inconsequential account with his actual name attached to it. This account, under the moniker "ChemicalHealth," has retweeted the MuskieBobber account in question.

The "MuskieBobber" has since been deleted.

A cursory search through the MuskieBobber account prior to deletion turned up at least one outright racist post concerning the Jimmy Butler situation in Minnesota, and another recent tweet featuring coded references to Chicago, which has larger sociopolitical connections we don't need to get into here. The first picture of the two below is bad enough on its own (h/t to Twitter user @Legsanity for snatching a screenshot) 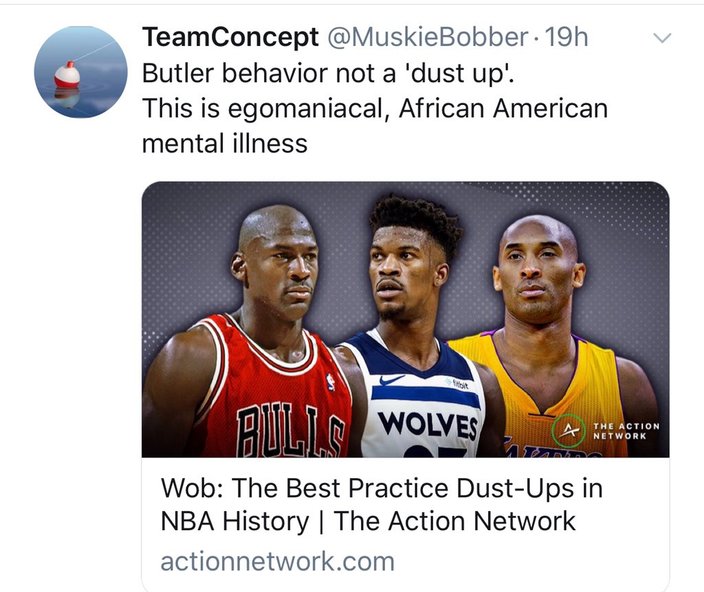 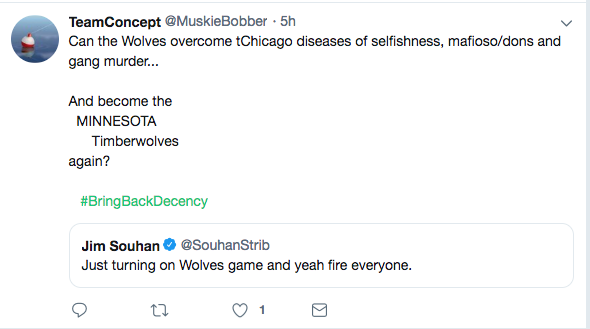 This was relatively unseen outside of some small Twitter discussions on Saturday morning, but to the Sixers' credit, they got ahead of the story and issued a press release that featured statements from both GM Elton Brand and Mike Muscala himself.

Earlier today, I was made aware of inappropriate and offensive social media posts from Bob Muscala, father of Mike Muscala. Simply put, they are unacceptable and in no way reflective of the beliefs of our organization.

Having known Mike since his rookie year in 2013-14 when we were teammates, I am also certain these posts are in no way reflective of his own personal beliefs. Mike has always been a great teammate and ambassador for the game of basketball, and he has never shied away from using his platform to do good in the community. He has our organization’s full support.

This situation is also a reminder to our players, coaches and staff of the potential impact – both positive and negative – of social media. We will use this situation to once again review, monitor and discuss appropriate social media usage across all areas of our organization.

The follow-up, from Muscala the younger:

First and foremost, I want to apologize for my father’s offensive social media commentary. His comments were uncalled for and inappropriate, and they do not reflect who I am.

I’d also like to apologize to the 76ers and my colleagues across the NBA for the distraction my father’s comments caused.

I really appreciate the professionalism and support shown by Elton, Coach Brown, my teammates and the entire 76ers organization.

The inclusion of a statement from Muscala was interesting and triggered a few questions on Twitter of whether he (or the team, frankly) should be responsible for something his father said, given that he was ostensibly not involved here. But for once, I will personally say I was impressed with the Sixers for getting out in front of a story, rather than reacting late after something had been left to fester too long.

(And, by the way, there's nothing unreasonable about Muscala apologizing here, nor do I think he would have been goaded into doing so. Muscala knows what the racial composition of his locker room and his league is like as much as anyone, and I imagine as long as his prior reputation is okay the "colleagues across the NBA" he mentioned in his statement will be happy to move on.)

The lesson, as always, is to never tweet. And if you're going to, you could always just not be a racist.