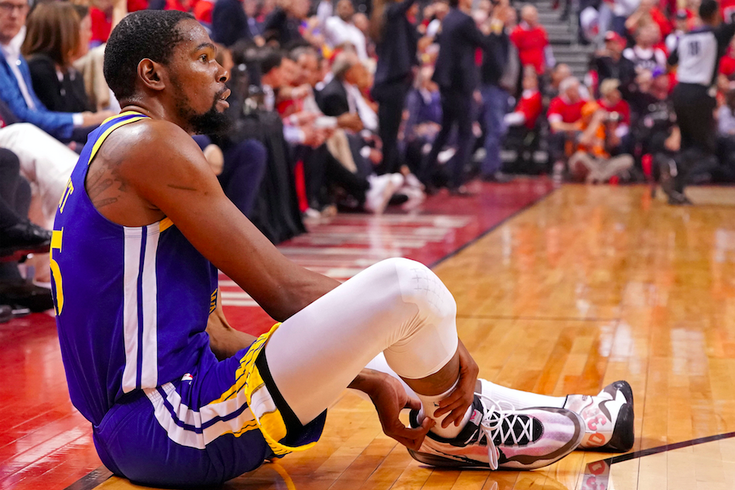 Golden State Warriors forward Kevin Durant sits on the court after an apparent Achilles injury during the second quarter in Game 5 of the NBA Finals against the Toronto Raptors. The fan in the arena cheered as Durant had to be helped off the court, which infuriated Sixers star Joel Embiid, he said on Twitter, as he watched the game on TV.

The NBA Finals took another interesting turn on Monday as the Warriors held on late to push a Game 6 against the Toronto Raptors back at Oracle Arena.

Golden State appeared to be in serious trouble when Kevin Durant, who returned after missing a month with a calf injury, left the game in the second quarter. He had been on fire up to that point, putting up 11 early points as the Warriors built a lead.

Durant came up lame after posting up Serge Ibaka on the perimeter, losing possession of the ball and instantly dropping to the floor. The Raptors fans at ScotiaBank Arena cheered at the sight of Durant grabbing his calf. The broadcast team and several Toronto players scolded the fans in Toronto.

Kevin Durant appears to aggravate his calf injury and heads to the locker room early in the second quarter. pic.twitter.com/VXu3SmTS8Y

It turns out Sixers big man Joel Embiid was watching the game. He was furious about the way the crowd reacted to Durant's injury.

Why are they cheering for his injury? Come on man #Disguting

It won't be lost on Philadelphia fans that this city got a bad rap for doing the same thing to former Cowboys wide receiver Michael Irvin, who went down with a serious injury at Veterans Stadium in 1999.

Crowd behavior is difficult to understand in the heat of the moment. Fans can get excited simply because a great player on the opposing team will no longer be able to beat them. They aren't necessarily cheering the fact that the player is hurt, although granted, this line of thinking strains credulity. It's almost impossible to defend cheering an injury, but it's also worth considering that thousands of people simultaneously do it.

Embiid, who dealt with sickness and injuries throughout this year's playoff run, has been venting about the Sixers' lost opportunity through these Finals. Losing is never fun, but when you lose to the eventual champions, there is at least some consolation in it.

Steph Curry, Klay Thompson and the rest of the Warriors have yet to fold to the Raptors. If they push this series to seven games, the Sixers will know exactly what they're up against.