All eyes will be on the Barclays Center on Thursday night as the 2018 NBA Draft unfolds in Brooklyn. They'll also be on the New York City skies above the venue. 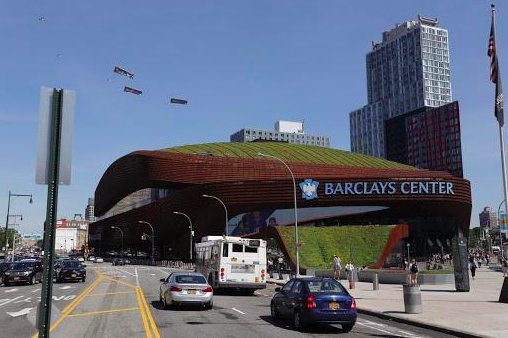 Banners fly over Brooklyn ahead of the 2018 NBA Draft.

The NBA's biggest offseason spectacle, the LeBron James sweepstakes, is about to hit hyperdrive once the dust settles on the draft.

Chester-based Power Home Remodeling Group is back on the campaign trail. The company is flying three banners above Brooklyn to woo LeBron James into signing with Philadelphia, where he can "Strive for GOAT-ness" with the Sixers. 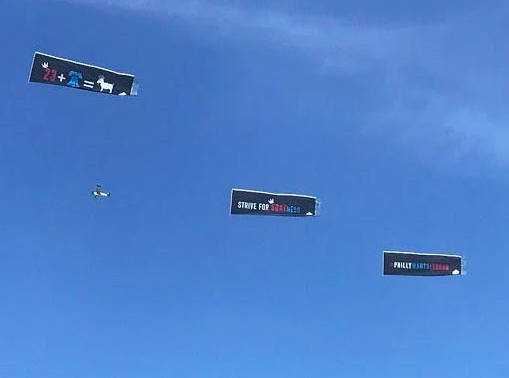 Banners fly over Brooklyn on night of 2018 NBA Draft.

Back in February, Chester-based Power Home Remodeling Group captured national headlines when they designed and purchased space for three LeBron James-to-Philly billboards in Cleveland. James told reporters he was flattered by the display as Cleveland fans took shots at Philadelphia for coveting their native superstar.

A Philadelphia-based company put up three billboards on highway to downtown Cleveland this morning saying that city wanted LeBron. Here they are in order. pic.twitter.com/vntsa8h3mE

The Sixers, despite the team's front office limbo, are expected to make a major play for the pending Cavaliers free agent. They'll vie against the front-running Los Angeles Lakers and other suitors including the Houston Rockets, Boston Celtics and Miami Heat.

In the weeks since the Golden State Warriors swept the Cavaliers in the NBA Finals, most speculation has claimed LeBron James is leaning toward joining the Los Angeles Lakers. National pundits such as Colin Cowherd have criticized the Sixers for their apparent laissez-faire approach to landing James, who hasn't even opted out of his contract with Cleveland yet.

Power Home Remodeling, ranked one of the best places to work in the United States, decided again to take the King's recruitment into its own hands. Co-CEOs Asher Raphael and Corey Schiller, both named among Glassdoor's highest-rated CEOs for four consecutive years, have embraced spending money on a campaign that galvanizes the greater Philadelphia area.

"It's a win-win," Raphael told PhillyVoice in February. "We're a big employer in the area and we want to help bring championships to Philadelphia."