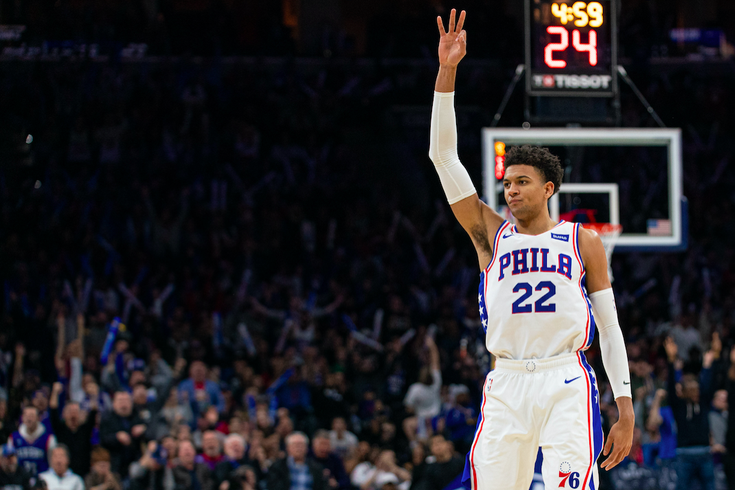 Three is half the number of Popeye's biscuits Matisse Thybulle bought to share among his Sixers teammates. 22 is the number he should have bought.

Philadelphia 76ers rookie Matisse Thybulle is back in the lineup after missing a couple of weeks with a knee injury, but his team nearly threw him off a plane yesterday for failing to get a fast-food order right.

Unlike most Sixers rookies in recent years, Thybulle has been relatively healthy this season. He's played in actual games and not been traded, clearing the low bar to be bossed around by veterans who all experienced light hazing when they entered the NBA.

RELATED: How the Sixers solidified their defense vs. Boston Celtics without Joel Embiid

As the Sixers traveled for a Saturday night game against the Dallas Mavericks, Thybulle was given the job of picking up some Popeyes and Chick-Fil-A for the rest of the team.

Matisse blew it big-time. Here's the moment everyone discovered Thybulle only got six biscuits and skipped the Popeyes fries in favor of Chik-Fil-A fries, as narrated by Tobias Harris.

The rook got the 76ers team order all wrong and @tobias31 is not having it 😂 pic.twitter.com/tsiqNmtAKS

The roasting continued on Twitter, where it was revealed Thybulle procured lots of honey.

He brought enough packets of honey to last a year.... that’s why we were really confused 🤦🏽‍♂️🤦🏽‍♂️ https://t.co/KM3ZFUNU1h

Harris may have had a reason to call Thybulle out in public. It appears that just days prior, Thybulle used Harris' phone to take selfies.

When your rook is a rook.... 🤷🏽‍♂️🤦🏽‍♂️😂 @MatisseThybulle why are these in my photos?! pic.twitter.com/vlUi0LkTof

The Sixers are entering a difficult patch in their schedule without Joel Embiid, who underwent surgery on Friday to repair a torn ligament in his finger. The timetable for his return is still up in the air.

For a team that's under constant scrutiny and the weight of high expectations, it's a good sign that the Sixers are still able to have fun and keep things light.